Tickets to Horse of the Year Show 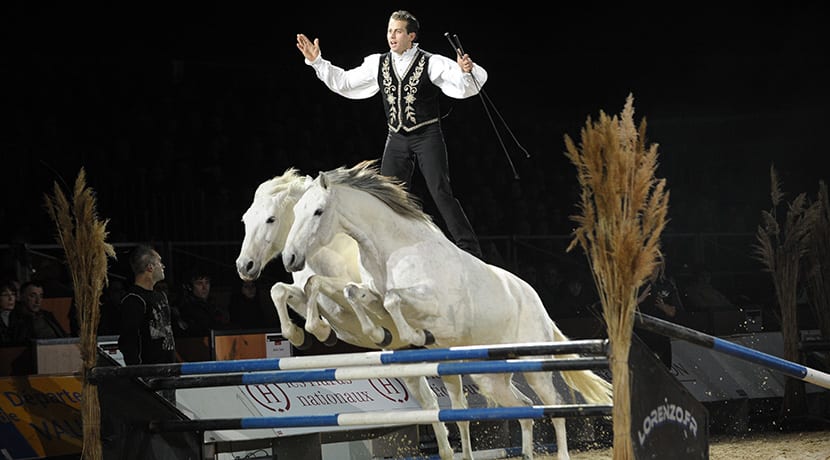 Each October, the NEC in Birmingham undergoes a horsey transformation like no other in order to host the incredibly impressive Horse of the Year Show (HOYS) which is the biggest week of the year for equestrian entertainment.

The show takes place this year from 2nd – 6th October 2019 at The NEC Birmingham Resorts World Arena and tickets are on sale now so don’t miss out. Whether you or a family member has an interest in horses, want to shop ’til you drop, or just want to enjoy a spectacular display of entertainment, ‘HOYS’ has something for everyone.

Horse of the Year Show really is the ultimate celebration of the horse; every showing and national showjumping class has to be qualified for throughout the year, so you are guaranteed to be seeing the best of the best compete for the overall champion’s title. Every performance includes an element of competition along with a variety of displays from around the world and the adrenaline-filled Pony Club Mounted Games, where teams will be competing in heats each day for their chance to win the highly-esteemed Prince Philip Cup on Sunday evening!

EXCLUSIVE FOR 2019 – The Sunday evening performance will host an impressive showcase of racing heroes never seen before at the show. Leading the charge of spectacular equine stars is four-time Cheltenham Festival winner: Big Bucks. He will be joined by a host of established racing icons of both the equine and human variety, with combined career winnings in excess of £10 million, in what is set to be a stunning parade of true equestrian excellence.

In addition to Big Bucks, Sunday evening visitors are set to experience a defining moment in racing history as one of the finest ever chasers, renowned for his power and grace, Sprinter Sacre joins some of the best Grand National winners in a one-off HOYS appearance. Headliners include another Paul Nicholls graduate, Neptune Collonges; Pineau De Re who famously jumpstarted the career of his trainer Dr Richard Newland; Bindaree, the son of Roselier, and winner of the 2002 Grand National; the first novice winner of the Gold Cup in over 41 years: Coneygree; and the ever popular hurdler with seven wins at Cheltenham: The New One.

Aside from the arena entertainment, there are also hundreds of shops located in the Retail Village and plenty of food and drink outlets to keep you fuelled and ready to explore the show. Visitors have the opportunity to get up close and personal with some of the wonderful horses and ponies in the Meet the Horses feature area located in the Retail Village and rub shoulders with some of their favourite riders with the celebrity rider signings. Spread across five days visitors will experience spectacular horsemanship and be left feeling full of admiration for the spectacular talent on display.

What's On are offering you the chance to win a pair of Sunday evening A Band tickets to this year's Horse of the Year Show​ at Resorts World Arena, Birmingham on Sunday 6th October.

Which of these is a famous fictional horse?