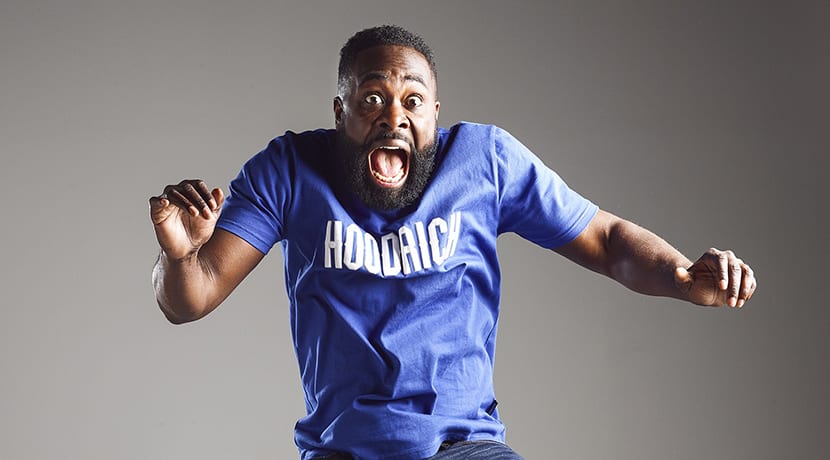 Join the Britain's Got Talent winner as he shares his funny observations on life, parenthood & family.

Kojo Anim shares stories and observations about life, parenthood and family ahead of his UK tour...

When did you first realise you were funny?
I’d always been entertaining my family and friends. I was witty and quick with a response. In school, if I got in trouble, it was always what I’d said, not what I’d done. I had an answer for everything. Comedy happened almost by accident. My first love was always football, but I had terrible discipline as a footballer. I was selected with some of the best young players in England for a school of excellence to study and play football, but I had a terrible attitude about being on time etc and relied on being very talented. But it didn’t work out.I learned a big lesson in hindsight, and it turned out to be a blessing. Missing that opportunity to change my life, the pain I felt when it ended, kept me disciplined when I found comedy. I would never, ever let an opportunity slip through my hands again. I have so much respect for every opportunity that comes my way now. I realised I was a   natural with comedy, but also determined that I was going to work hard, find solutions and make no excuses.

You were ‘discovered’ on Britain’s Got Talent, but you’d already been working the circuit for 20 years. How did you turn that natural ability into a career?
I was doing talent shows at university and had the chance to go to comedy school, so I borrowed £150 from my Aunty Sandra - I’ve more than paid her back now. After that, I did a lot of university comedy gigs and built up a fanbase. From that, I was able to set up Kojo’s Comedy Fun House, which ran every Sunday for eight years, with 300 people queueing up outside each week, packing it to the rafters and coming along week after week. I came from a partying background, so would invite celebrities to the comedy shows - as well as hosting exciting new comedians and DJs - so it became somewhere people wanted to be.

What really made it big, though, was when David Chapelle was in town and heard about the club. I called someone who’d seen him and got them to put him on the phone. He just came down and performed. ‘Going viral’ wasn’t even a thing at the time, but that’s kind of what happened. It was the first show he’d done after going away following his big success, so everyone was talking about it. It was huge on YouTube, and it was a real international moment to see him back on stage. So then people started talking about the Fun House, and I was hearing from American comedians over in the UK who wanted to come down. I was just a young comedian wanting to express myself there, and all this came from that small place.

Before Britain’s Got Talent, you were almost better known in America than here in the UK. How was that?
I’d met, through friends, Nick Cannon, who at the time was still married to Mariah Carey - how crazy is that? - and he was bringing a big improvisation show, Wild N Out, back to American TV and wanted to include some UK talent. I leapt at the chance. I’d watched the show as a kid, and it was a ridiculous opportunity to go and work with all these famous and amazingly funny people in America. Everyone I grew up with used to watch it, and there I was being invited to be the first British comedian on it.

So what made you audition for Britain’s Got Talent?
I’d been going through a bad period both financially and in terms of opportunities. I’d had my son, and that increased the pressure on me to decide what I was going to do with the rest of my life. I was feeling like I’d been placed in the ‘has-been’ box so far as a comedy career was concerned. I was approached by Britain’s Got Talent - they’d seen some videos online - and I was told the producers had loved the videos and were dying to get me on the show, so I thought, ‘Why not?’ I’d always said it wasn’t for me - I didn’t think it was credible. But when I discussed it with my fiancée, she said the fact they’d had to find me as an ‘unknown’ meant they didn’t know me - so I had nothing to lose.

What was it like preparing for that first audition?
I didn’t just plan for the first audition, I planned my acts for every round from the first audition to the final. I had 20 years of material, so why not? I just had to decide which way round to use it, and to get my head straight about what was to come. As I gradually went through each phase, I realised what the opportunity was actually going to mean to me. The show’s called Britain’s Got Talent, but I suddenly realised that the world would be watching online because ‘Got Talent’ is a global thing. I know people in the comedy industry were saying, ‘Why is he doing it?’, but people across the country didn’t know me. I had to be able to look at my son and know I’d taken the chance, taken that massive leap of faith.

Simon Cowell famously hates comedians on the show, but he gave you his golden buzzer. How did that feel?
I was so nervous. The judges genuinely don’t know what’s coming next as you walk out; it’s a conveyor belt of talent. Simon had given two comedians on before me absolute hell that day. My plan was to get Amanda Holden’s and David Walliams’ approval. Alesha Dixon had seen me at gigs, so I hoped she’d be on side. I’d actually written Simon Cowell off, as I knew I only needed three of them to back me.
It was the very first day of filming, and - to add to the madness - Simon had never pressed his golden buzzer on day one. So when it happened, everyone was so shocked -  day one and a comedian! The reaction was so gratifying. It told me, ‘I can do this’. I’d proven myself and removed my doubts about me. After that, I knew I was good enough.

How’s it been since the show?
Absolutely life-changing. My dad was in Ghana and it came up on the news. I didn’t leave the house for four days after the golden-buzzer audition was aired. I had so many messages on my phone, and everywhere I went, people were giving me their love and support. All the work during those 20 years had been gearing me up for it, and that’s made it all a bit easier to cope with. It’s crazy and has all happened at the same time as adjusting to life as a first-time dad. Roman’s oblivious to it, but we’re capturing it all on our phones and it’s amazing that he’s been on the journey with us. Roman’s also been life-changing. He’s allowed me to be selfish, and people told me how much harder I’d want to work after becoming a parent… You’re making decisions for your child, not just for yourself.

How do you feel ahead of the tour?
Touring nationally is a dream come true; we’re working on material at the moment. There’s definitely going to be a look at fatherhood - looking at what goes through a man’s mind as a new dad, as well as asking some serious questions like, ‘Will I end up looking like my parents, will my child end up in the same situation as me?’ I’m looking forward to touring - going to places I’ve never been to, like Swindon, Malvern, New Brighton and places in Wales I can’t even spell… I’m now 40. I told my fiancée, Tiff, that I            believe the best years of my life will be my 40s - and it’s definitely looking that way. Let’s have it!