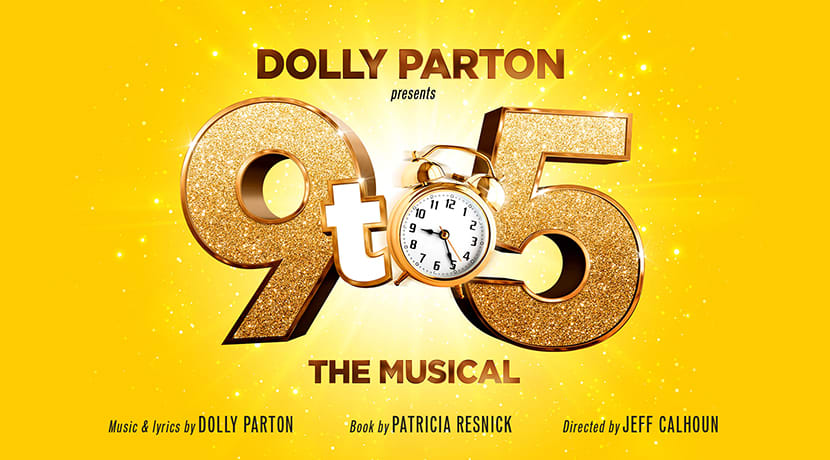 “I'm so excited that 9 To 5 is heading to the Midlands,” says Dolly Parton, in talking about her hit musical’s three visits to the region in 2021. “I'm hoping you have as much fun watching it as I had writing the music for it. The show is perfect for anyone who's ever wanted to string up their boss, which is almost all of us. So come join the fun!”

The touring version of Dolly Parton’s 9 To 5 The Musical stops off in the Midlands this month. What’s On caught up with one of its three leading ladies - Amber Davies - to talk about meeting Dolly, the production itself and her 2017 success on hit reality TV series Love Island...

“Dolly is very much involved in the show,” says one of the touring production’s lead actors, Amber Davies - best known for winning hit reality TV series Love Island in 2017. “9 To 5 is about three very different women whose boss’s awful behaviour towards them brings them together. Although they work in the same place, the women are taking very different paths in life: you’ve got single mum and recent widow Violet; my character, Judy, who’s completely heartbroken and turns up having never had a job before because she’s only ever been a housewife; and Doralee, the character that Dolly played, who is judged purely on her appearance despite having a heart of gold. It’s very much a musical about female empowerment and is full of surprises and real comic moments.”

In the wake of the Me Too movement and the gender pay gap revelation, Amber believes 9 To 5’s serious side is just as relevant now as it was when the film was released nearly 40 years ago: “I think to a certain extent we’ve come a long way, but in other ways we still have a long way to go. There’s a bit of an ironic joke in the show where Violet says that the sexism these characters deal with probably won’t even be an issue in 10 years’ time -  and yet here we are staging 9 To 5 in 2019 and it’s still relevant today. But I always love the audience’s reaction at the end of the night -  we send them out of the theatre on a real high because this show really illustrates what women can achieve when they come together. We definitely highlight issues of equality, but in a lighthearted way.”

And can we expect a country score in 9 To 5?

“Dolly wrote a new song especially for the West End cast called Hey Boss, which definitely has a country twang to it. But there are all kinds of different styles and genres in the show. I’ve got a great, heartfelt ballad number, but there are also fun songs in there, like the title track itself. What’s so great about Dolly’s score is that each song has such depth to it. For example, Doralee has a number called Backwards Barbie that really expresses her feelings about the way people view her based on her appearance.”

Meeting Dolly Parton was a surreal experience for Amber: “If you’d have told me last year that I’d be working with Dolly, I would’ve laughed at you! Dolly is one of the show’s executive producers, so she’s had so much more involvement than people would ever imagine. If there was even a tiny change in the script, it would have to go through her. She really wants everyone involved in the show to do well, so the first night when she came to watch, she was just as nervous as the rest of us.

“When I went out to Nashville to meet her, her advice to me was that no one is ever in competition with anyone apart from themselves, which is so true. You should never compare yourself to anyone else because everyone’s timeline is so different. Considering how famous and iconic Dolly is, she was just so down-to-earth and lovely. I’ll certainly be taking her advice forward with me.”

Musical theatre has always been a big part of Amber’s life. Her sister, Jade, has appeared in a whole host of famous stage shows, including Les Miserables and Andrew Lloyd Webber's Phantom Of The Opera.
“My sister is a role model for me and set the bar when she got offered her first West End role. She helped me believe that it was possible. Obviously, it’s extremely difficult to get to the West End, but you just have to get your one break, so I was always hopeful. I had the most amazing year on Love Island, but I just really, really missed being on stage. Performing brings me so much joy.

“I believe everything happens in life for a reason. I think I was meant to go on Love Island when I did, and now I’ve gone full-circle to being back doing what I love. It was scary accepting the challenge of being in 9 To 5, but it’s just a joy to be a part of.”

While Love Island definitely helped boost Amber’s profile, she’s fought hard to prove herself in the musical theatre world: “Love Island definitely helped give me a platform, but I’ve also been really keen to prove to people that I haven’t just got where I am in my career because of that. I’m here because I genuinely deserve to be; I’ve worked incredibly hard to get into professional musical theatre, just like all the other performers have. The reaction I get from the audience is always so positive. I get a lot of tweets congratulating me and saying that they’d definitely judged a book by its cover, so couldn’t believe how great I was. It’s just so, so lovely to read.”

Amber hopes the future will prove to be even more exciting for her than the present: “I think at the moment I’m very grateful and content with where my career is going. I really can’t wait to tour. I don’t have many commitments - no boyfriend, no children - so it really is the best time for me to do it. I really do want to continue doing musicals, and Broadway is a massive goal for me. I would also like to keep my face on telly, whether that be presenting or acting. TV work is definitely something that I have in my sights. I just need to make my contacts and wait for the right role to come along. I’m really not one to rush into things - I don’t take the job if I don’t think it’s for me.”

So which roles in the world of musical theatre would Amber most like to play?

“Just like every other musical theatre student, I’d love to play Elphaba [in Wicked]. It’s such a strong role, but I’m maybe a little too young for that at the moment, so it’s one for the future. I love any feelgood musical - like Hairspray, for instance. I’d make a great Amber Von Tussle, which I actually got offered just before I went on Love Island. It would be amazing to go full-circle and actually get to play that role. Rumour has it Mean Girls and Pretty Woman are coming to the West End, too - both musicals I’d be really interested in doing because I know I’d have so much fun!”

9 To 5 The Musical shows at The Alexandra Theatre, Birmingham, from Friday 6 to  Saturday 14 September.

As the temperature drops and the nights draw in, what could be better than heading to Birmingham’s Alexandra Theatre for an evening of sassy, American deep south shenanigans to stave off those end-of-summer blues?

9 To 5’s host is a pre-recorded beamed-in Dolly Parton, whose task it is to narrate us through the musical adaptation of the hit movie in which she co-starred back in 1980.

Full of rip-roaring tunes, the show offers a pacey, lighthearted canter through the lives of three women as they grapple with early-’80s sexism, office gender politics and overbearing and highly arrogant male-dominated managerial leadership. A reminder that the old boys’ club is very much in town comes via the brilliant performance of Sean Needham as the cringe-worthy over-sexed Franklin Hart Jnr.

Despite a lot having changed in the workplace since the film hit cinema screens, 9 To 5 is as relevant today as it was nearly 40 years ago, providing a stark reminder that women have not yet attained equal pay and are still having to push against the glass ceiling. More change is still very much needed.

The trials and tribulations of the show’s three female protagonists - overlooked, undermined and treated as being of lesser importance than their male counterparts - is presented with, at times, almost Carry On-style humour. As indeed is their eventual fightback.

Louise Redknapp as Violet Newstead, Amber Davies as Judy Bernly and Georgina Castle as Doralee Rhodes are each outstanding in their own unique way. Their performances are strong and funny, but it’s Lucinda Lawrence as the much-maligned Roz Keith, infatuated with her boss, who almost steals the show.

I won’t spoil the surprises - there are many - but 9 To 5’s sass and wit ensure that this is a great night out for anybody craving a fun evening at the theatre. The music is fabulous too - you’ll be tapping your toes before you even know it! - while the choreography is clever and perfectly executed. Expect to be humming the famous title track for hours if not days afterwards.

9 to 5 The Musical shows at The Alexandra, Birmingham until Saturday 14 September.