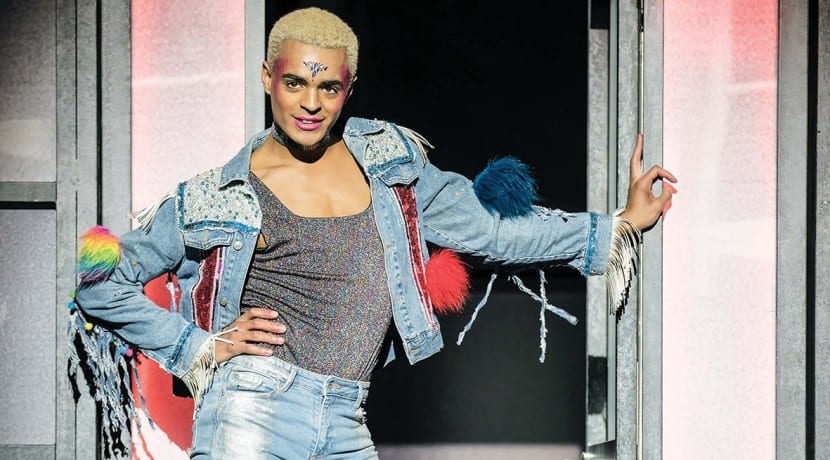 Jamie New is sixteen and lives on a council estate in Sheffield. Jamie doesn’t quite fit in. Jamie is terrified about the future. Jamie is going to be a sensation.

Supported by his brilliant loving mum and surrounded by his friends, Jamie overcomes prejudice, beats the bullies and steps out of the darkness, into the spotlight.

With an original score of catchy pop tunes by lead singer-songwriter of The Feeling, Dan Gillespie Sells and writer Tom MacRae (Doctor Who), this brand-new musical will have everybody talking about Jamie for years to come.

Everybody’s Talking About Jamie may have come from humble beginnings - it was inspired by a television documentary and   premiered in Sheffield - but after only a matter of months it had transferred to the West End. Since then, the musical has enjoyed blockbusting success, with five Olivier nominations, an extensive UK tour and a forthcoming feature film version testifying to its incredible popularity.

The show follows Jamie New’s quest for acceptance on his journey to becoming a drag queen...
“Jamie is a 16-year-old boy who wants to go to his school prom in drag,” explains ex-Coronation Street star Shobna Gulati, who is touring with the hit musical having previously appeared in the West End version.

“The musical follows the ramifications of that; on himself, his family and his small community in Sheffield.”
Shobna’s character, Ray, has a very important part to play in Jamie’s upbringing: “Jamie is the product of an essentially single-parent household. Ray is the best friend of Jamie’s mum, Margaret, and has been around to watch Jamie grow up; everybody thinks of her as the aunty or surrogate father figure. You          always have to have that good cop, bad cop thing going on, and I think Ray and Margaret have often swapped those roles in bringing up Jamie. Ray doesn’t go backwards to go forwards and she’s very much into tough love, but she also spoils him rotten. I think every character’s relationship to Jamie changes throughout the musical because Jamie himself evolves. From Ray’s perspective, she’s worried about Jamie’s dream of being a drag queen because that’s just the nature of family. She definitely supports him, but she also wants to protect him.”

What does Shobna think has made Everybody’s Talking About Jamie such a roaring success?
“I think the world as it stands likes to put people into boxes and divide us all up. The more you can gaslight somebody into believing they don’t belong, the easier it is to control the masses. Considering these polemic times, Everybody’s Talking About Jamie exists at exactly the right moment. The story is so popular because it gives everyone a chance to recognise that they can be a part of something. Everybody can be recognised in their own individual right, which is really important for anyone who feels like they’re different or just on the periphery.

“Everybody’s Talking About Jamie is about creating a space in which everyone can be who they want to be. I really love being in Jamie because of what it represents, the different people it represents and how it does that. The inclusivity of the show is incredible. Jamie is so out there and so inclusive as a piece, which hasn't always been my experience over the course of my career.”

As well as relating to the show’s ethos, Shobna can also connect with one of its musical numbers: “My favourite song has to be Wall In My Head, which comes at the beginning of the show, where Jamie is considering his life, how to get over certain obstacles that crop up and move past some personal demons. I think I relate to that song on a personal level because it’s all about getting over that next wall, which is a true situation for every single one of us; I don’t think anyone has hurdles they haven’t had to overcome in life.”

Not only has Shobna played Ray on stage, she will also appear as the character in the film version, scheduled for release in October.

“I feel so lucky to have worked with all the different Margarets that I have - each one has been absolutely astounding in their own right. The same with each Jamie. I think a lot of my joy at doing Everybody’s Talking About Jamie is because of the extraordinary opportunities I’ve had to work with people. I’ve been lucky enough to tag along!

“The production has certainly given me an    insight into myself. I’ve been in so many different renditions of the story, and what it brings to me is a sense of belonging.”

Joining Shobna on tour is Layton Williams, who played Jamie in the West End. “Things be changing,” he says. “People are waking up and realising that stories like Everybody’s Talking About Jamie is what we want to see. We want to see everyone represented. This is a moment in history - a movement. I’m so proud to be a part of that! I’m a prime example that yes, we are absolutely moving in the right direction in terms of representation. I’m a non-white gay actor playing a part that was once white - and now another mixed-race man has been cast in the West End version too.

“This musical tries to tell people to stay true to who they are, to be proud of themselves, and that if they’re different or feel like they don’t fit in, then there’s a place for them in the world anyway. It’s all about having hope.

“When we’re young, we doubt ourselves, but it’s just about knowing that things will get better. It’s about surrounding yourself with your friends, family and people who you love. It also sends the message that people can change their minds! People’s minds can definitely be opened. I hope that people think about all these things when they come to see the show.”

NOTE: This interview was conducted prior to the Covid-19 lockdown on 23 March.