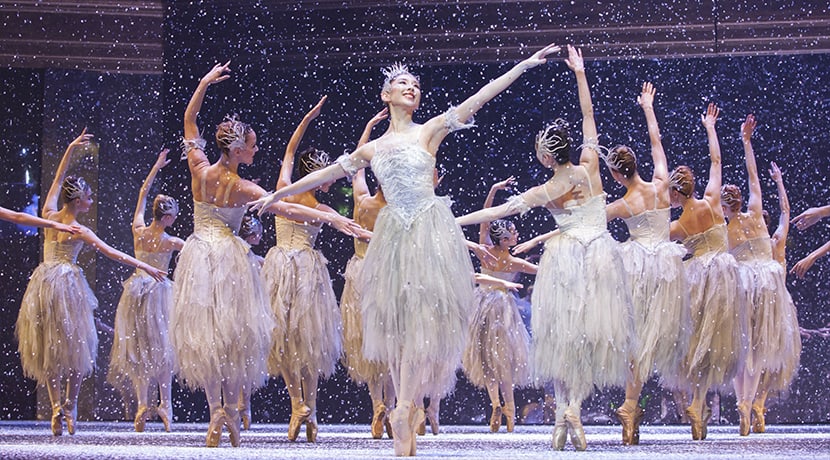 Continuing to enthral and delight Midlands audiences 29 years after making its debut, Sir Peter Wright’s The Nutcracker is the most festive of ballets and the perfect way to kick off the Christmas season at Birmingham Hippodrome.

With its exquisite designs, impressive live orchestra and magnificent performances from 60 highly skilled Birmingham Royal Ballet (BRB) dancers, Sir Peter’s version of the story is widely considered to be one of the best in the world.

For those not in the know, the narrative takes place on Christmas Eve and follows the adventures of a young girl named Clara. When given a wooden nutcracker as a gift, she finds herself swept into an enchanting winter wonderland of dancing snowflakes, where she meets the most beautiful of beings - the Sugar Plum Fairy.

And her magical journey features plenty more besides - an army of toy soldiers, a kingdom of sweets, battles with fierce human-sized rats and wondrous displays of traditional dances from far-flung places.
A magical Christmas tree that miraculously grows from four to 15 metres and a fireplace that expands to fill most of the stage are just a couple of examples of the production’s jaw-dropping set designs, while lighting by David Finn moves from subtle to dramatic as the story unfolds.

The sumptuous 200-plus costumes that contribute to the magic and appeal of The Nutcracker are the work of internationally acclaimed set and costume designer John McFarlane. John’s original designs remain at the forefront of the production and provide a constant reference point behind the scenes - as we recently found out during a visit to BRB’s costume department.

Although some of the work required to produce The Nutcracker is outsourced, much of it is dealt with in-house - and as Elaine Garlick, the company’s head of costume, pointed out, The Nutcracker isn’t just for Christmas... it gets all-year-round attention because ‘we know it will return every winter’.

“We never put Nutcracker 100% away,” explains Elaine. “With a production of this scale, there’ll always be work that needs doing. Costumes take a hammering due to the physicality of the dancers, and there’ll always be rips, tears, deterioration or maybe a Sugar Plum outfit in need of re-beading.”

The latter really is an intricate process, as  witnessed during our visit. It’s only close up that you fully appreciate the dexterity involved in bringing the Sugar Plum bodice to life. Everything has to be just as John intended - from the delicate beading through to the subtle expansion of colour on the tips of the individual petals. An exquisite copy of one of John’s paintings, envisaging how the Sugar Plum Fairy should look, takes pride of place on a studio wall. A work of art in itself, it acts as a constant reminder of the designer’s vision.

Sugar Plum aside, the magnitude of this production becomes evident upon entering the costume warehouse. Row upon row of beautifully crafted outfits displayed on rails are sectioned off according to scene - flowing, lyrical dresses for the snowflakes, cadet costumes for the toy soldiers, authentic Victorian attire for the opening scenes, rats’ tails as tall as a person and a fully lined King Rat costume which is so heavy that I could barely lift it into the air. Flamenco dresses, Russian culottes, Oriental silks, sweet costumes, shoes, boots, tights - and even Sloggi knickers! - also feature in what is unquestionably the biggest dressing-up box I’ve ever seen.

My new-found knowledge of The Nutcracker’s creative back story has certainly ignited my excitement at the prospect of seeing the show again when it opens late this month.  And it will undoubtedly be with the greatest respect and admiration that I will watch King Rat as he pliés across the stage to do battle with the Nutcracker... while simultaneously swishing a humongously heavy coat & tail and balancing a proportionately weighty headdress!

2. Before the curtain goes up on the first performance, hours of work have been undertaken behind the scenes. The sets, props and lights for the show will travel to the Hippodrome in five articulated trucks from the Birmingham Royal Ballet stores in Dudley. When the sets arrive, work will begin on the get-in and fit-up. This process takes approximately three days. Another two days are usually required for technical and stage rehearsals.

3. The production has a flying goose that transports Clara to a magical land - it travels 20 metres across the stage at every performance. This means that the goose has travelled over 6.4 miles at Birmingham Hippodrome since 1990.

4. A crew of around 50 people work backstage on the production.

5. 75kg of flame retardant artificial snow is used in the production. It’s imported from a specialist company in New York.

6. Since The Nutcracker’s first performance back in 1990, dancers playing the role of snowflakes in the show have made their way through over 720 cans of silver-sparkle body paint.

8. The Nutcracker features over 45 wigs and pieces of facial hair.