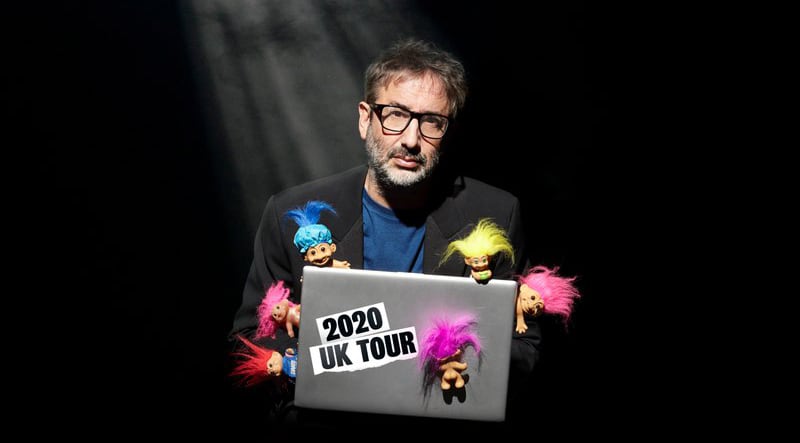 David Baddiel is critically acclaimed in a number of creative fields. In his time in the spotlight, he’s been a comedian, presenter, author, screenwriter and playwright. His previous touring comedy show, My Family: Not The Sitcom, even transferred to the West End and was nominated for an Olivier Award.

“I decided when I came back to performing in 2013 that I didn’t just want to do generalised banter in that comedian way,” explains David, who’s visiting the region this month with his latest stage offering, Trolls: Not The Dolls - a show based around the subject of  social media. “I wanted to talk about stuff; things that are important to me. I’ve watched quite a lot of Ted Talks and actually hosted a programme on Radio Four about people doing serious talks. I started to wonder about whether there could be a comedy version of really digging into a single subject. So my first show, Fame: Not The Musical, was about how weird the celebrity world is, and then My Family: Not The Sitcom was about my family. During both shows I was using social media to talk about the ways in which the world was changing, and particularly the way people were getting really angry. Those parts worked so well in my previous shows that I realised there was probably a whole show to be had there.

“Certainly social media never fails to surprise me. For example, going back to when it was first becoming a thing, a journalist called India Knight described it as this website that’s like a cocktail party where you can mingle with others and have a lovely time. I’m sure many would’ve been surprised that it’s turned into mainly people shouting at each other. Fortunately or unfortunately, social media does actually influence people a lot. If you fast-forward just over 10 years on from Twitter’s launch, Donald Trump becomes President of the United States. He is the archetypal troll - and not just in his presence on Twitter, but in his whole dialogue and very loud, angry, extreme discourse with conspiracy theories and all the rest of it. So we’re not talking about trolls as something on the fringes of our society here - they’re at the very centre of the changes that we see happening in our world.

"I think people used to dismiss social media snootily as a place where people try to show off or talk about what they had for breakfast. Incidentally, I do the breakfast thing with my whole series of tweets about Full English Breakfasts, and people go barmy about placing the beans next to the sausages and whatever. Even that gets an extreme reaction! So social media can be really trivial in that way, but also it can be so influential and is really changing everything. I predominantly use Twitter, and I think Twitter is where a lot of the battles - particularly political ones - are happening. Social media has changed the fundamental ideas behind the way humans think and just are, especially in regard to power and the way people interact.”

David’s Twitter interactions with trolls was one of the inspirations for his show: “When this really abusive part of social media began happening, people started this campaign about not ‘feeding the trolls’. Just ignore them. I found that really strange as a comedian, because trolls are essentially hecklers - they’re people saying ‘you’re s***’ in one way or another. Generally a comedian’s response to hecklers is to try and put them down funnily. It’s seen as part of the job; to take what they’ve said and to disarm them in a way that makes the rest of the audience laugh. I didn’t see that as any different on Twitter. When I had a troll tweet me, I would retweet it with my own response above and it had the same response from the audience as it would in a live show... people laughed! I can sort of be a conductor of this great big comedy orchestra too, because others are itching to join in. So I’ll start something by responding to a troll with a joke, and someone else will then add to that with a graphic or whatever. People always ask me if what trolls say to and about me hurts me - and the true answer to that is yes. But seconds later I think it’s just immaterial. The window of feeling hurt is definitely getting smaller and smaller. One thing that Trolls: Not The Dolls tries to do is take this  terrible, abusive thing and transform it into something joyful and funny. That’s one way of thinking about trolls that takes away any power they thought they had.”

Trolls: Not The Dolls has been described as Baddiel’s most political show yet, an assessment with which he agrees: “But I should stress from the start that it doesn’t come from a set political perspective. I certainly was left wing when I was young, but now I’m no wing whatsoever. I use that phrase rather than ‘centrist’ because I don’t really like that word, and, in fact, it’s something that trolls often use. What I mean is that I try not to fit any prearranged ideological map. If something happens in the news, I don’t go, ‘Oh, I’m left wing so I should think about this like this’. I just try to go off what I think, which doesn’t mean I won’t end up thinking about things in what is traditionally seen as a left or right-wing way. It just means that I’m more focused on my own identity. The show is actually about that, too. There’s a lot about how one’s pre-thought-out identity leads to anger. For example, I made this incredibly innocuous joke about Nicola Sturgeon, which led to unimaginable rage from Scottish Nationalists. But being a Scottish Nationalist had absolutely nothing to do with the joke. I think social media is a lot about saying, Here I am, and wanting to have an identity in amongst the sea of people. One way of doing that is to turn up the volume and make people notice your identity - and the most obvious way to do that is through anger.”

So how come David has so many strings to his bow?

“From the word go, I’ve never really acknowledged boundaries between different types of storytelling. Take the children’s books as an example - my son, who was eight at the time, asked me why Harry Potter didn’t just run away from the Dursleys and find better parents, which gave me the idea for my first children’s book. In that world, children choose their own parents. I immediately saw that that particular idea was right for a children’s book rather than a live show, but what I didn’t do was decide that because I wasn’t a children’s author I couldn’t write it.

“Then, with my play, God’s Dice, I had an idea about a scientist who proves the existence of God with the help of his student - and to me that felt like an idea best fitted to a play. I really don’t feel strapped into one medium. People always tell me I do so many things in my job, but I don’t feel like that: I’m not a         comedian and a plumber! I’m just a storyteller in different forms.”