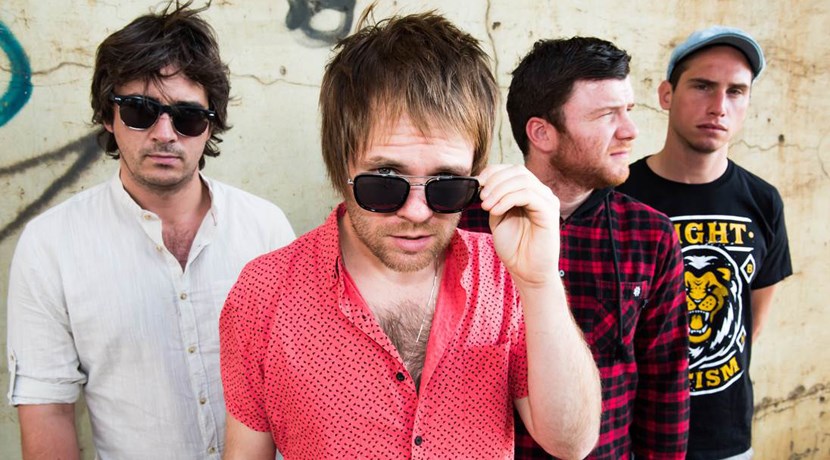 Enter Shikari are headlining Slam Dunk Festival, which returns to Birmingham in May. What can fans expect from this anniversary show?
For the first time in our lives and for a band that relentlessly looks forward, we’ll be pausing for breath, celebrating our history and looking at how we got to where we are today. We’re allowing ourselves a few months of nostalgia as we revisit our first release, Take To The Skies. We’ll be playing every track from the album, which means a few songs will be getting their first ever airing live!

Take To The Skies reached number four in the UK album chart, selling almost 30,000 copies in its first week. Prior to the release, did you and the band expect it to be so well-received? A debut album reaching number four is pretty impressive...
We’d been feeling a slow and steady surge of support for a while, as more and more people began to take notice of us, but I can’t say we anticipated the album charting. The chart was such a foreign concept to us anyway, coming from such a DIY punk background, so it really blew us away. I remember it really feeling like an incursion on pop music by the underground. It felt like a success for the whole scene.

Similarly, could you ever imagine when you started out back in 2003 that you’d be headlining the UK’s biggest punk rock festival?
Absolutely not. Back then, it was just on our bucket list to play shows outside, to simply be on at a festival. After playing every small, sweaty and dark venue on the UK circuit, playing outside felt like such a luxury. I remember that being our only ambition - a somewhat quaint one, in retrospect. Now, though, it feels right. We’re more than ready. We’re insatiable.

In more recent years, you’ve worked closely alongside Hospital Records in releasing drum & bass remixes. How did this come about?
Hospital Records has been my favourite drum & bass label since I was about 16, buying records and getting into DJing for the first time. We’d worked with a few artists on their label who’d done remixes of our tracks here and there. And it felt like with The Mindsweep we had the perfect album - in all its diversity - to be reworked and remixed in its entirety. It turned out a few of the producers on the label were fans of ours as well, so it felt like a really natural and worthwhile project to do.

With that in mind, how do you think your fan base has evolved over the years?
I think it’s mainly just become more diverse. It started off as much more of a narrow, ‘underground scene’-orientated following. But it’s since blossomed to include people from all walks of life, all ages and backgrounds. I think this basically follows or shadows the progression of our music as it’s become more diverse, with wider influences. Growing up, we were very lucky to have had inspiration from drum & bass, neoclassical, grime, indie, and we’ve subsequently been lucky enough to have made friends and drawn followings from each of those scenes too.

Last year, Enter Shikari embarked on their biggest headline tour to date, playing numerous arena-style venues. Do you prefer performing bigger shows or smaller, more intimate gigs?
My preference is always to play outside, in and often against the elements. It feels more primitive and raw that way. But really, I get asked this question all the time and I’m honestly not fussy. I enjoy playing anywhere; the environment isn’t important as long as it provides a backdrop for human connection. Give me a mic, toss me down a well and I’ll sing my heart out if anyone’s down there to join me. Give me a stage in the middle of a swamp and I’ll wrestle an alligator for their enjoyment.

Have you performed any particularly memorable shows?
The width, breadth and height of this question and all its possible answers gives me vertigo. But to give you something rather than nothing, the first one that comes to mind was in Blackpool, I think. We didn’t actually get to play the show, though, so I’m not sure it even counts as an answer to this question! The show was cancelled because, during soundcheck, our sub bass started loosening bits of the ceiling and consequently brought into question the structural integrity of the building.

Have you attended any previous Slam Dunk events?
Yeah, we DJed at one of the first ones, actually. And then again last year. Been a few times as a punter as well. Always a good time.

What does the future hold for Enter Shikari?
Sweat and toil. I’m halfway through writing an album that will redefine us and will hopefully bring our message to a new audience.

Enter Shikari play Slam Dunk Festival at the NEC, Birmingham on Saturday 27 May.