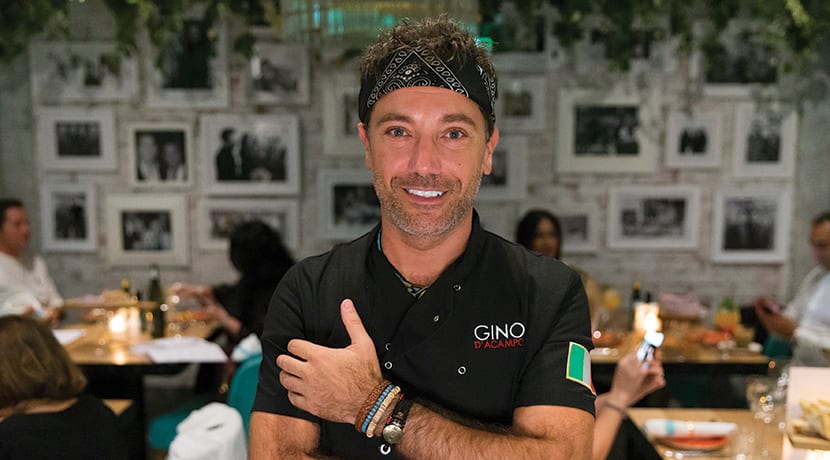 Situated on the bustling Temple Row, it features 165 covers, a 25 metre cocktail bar at which patrons can dine, a deli bar and a private dining area. A 15 metre open kitchen with a spectacular hand-crafted copper wood oven sits centre restaurant, providing guests with the opportunity to watch Gino’s chefs in action.
The opening of the restaurant marks the completion of the first of a two-phase grand plan which Gino has for Birmingham - still to come is a rooftop sky bar and restaurant with spectacular views across the city...

“My new restaurant serves real Italian food and has a real Italian look,” explains the charismatic chef. “Don’t get me wrong, I have other restaurants in Birmingham - we have Piccolino and Bank, which are both great restaurants, and I do all the menus and all the stuff like that - but this is different. Here, you’ll have real Italian food, fresh ingredients, the lifestyle. And the look of the restaurant is different, too. We source everything from Italy. I have a company where we import ingredients. We bring them here, we store them here, and then we send them to the restaurants. Everything you see, everything you touch, has been chosen and looked after by me.”

Alongside an extensive food menu offering Italian classics aplenty, Gino D’Acampo My Restaurant’s wine list boasts one of the biggest selections of prosecco, sparkling wine and Franciacorta in the country. There are more than 30 varieties to choose from, many of which you won’t find available anywhere else.
If Gino was visiting his new eatery as a diner, which dishes would he order from the menu?

“I would definitely have rigatoni with wild boar ragu. I usually have the calamari - we make it to perfection, with fried courgettes, fried peppers and a beautiful lemon mayonnaise. I would rock a pizza, because I’m greedy. My favourite pizza is the Real Neapolitan pizza, with Italian sausage, friarrielli, mozzarella and chilli. We make the best. If I had enough space in my belly, I would rock in with the slow-roasted pork belly - that is very sexy, with the radicchio and the chopped roasted hazelnuts on the top; it's very cool. For dessert, I always have a tiramisu. We make the traditional tiramisu with the Savoiardi biscuits, mascarpone, Amaretto liqueur. Mwah! Fantastico!”

After Italian, what’s Gino’s favourite cuisine -  and is there anything he really can’t stand?

“I always eat Italian food! I like Japanese food, Chinese too. I’m not a huge fan of Indian cuisine; there are too many herbs and spices. It's very different from Italian cuisine. We use four or five ingredients to make one thing, they use 23 different spices and ingredients. It's just not the way I cook or eat.

“I hate cucumber and I don't like coriander - it's too overpowering. When you eat something with coriander, the only thing you taste is coriander. It reminds me of soap. Once, I was invited somewhere - I can't be too specific because it was a royal thing - but ****ing hell, do you know what they served me? Cucumber and coriander sandwiches! Cucumber sandwiches with a kind of coriander pesto in it. I pretended to eat one, but I had a napkin on my leg, so I rolled it into the napkin and threw the napkin underneath the table. It was a table of 10, so it could have been anyone who’d thrown it.”

Birmingham boasts a brilliant and explosive food scene, with six Michelin-star restaurants, an abundance of high-quality independent eateries, one of the UK’s most popular street-food events and plenty of big-chain restaurants. So what is it about the city that makes it so appealing to restauranteurs and diners?

“Birmingham has always been a great city for food, because here is where the BBC Good Food Show is. I remember 20 years ago we used to do it. It was Gordon, Ainsley Harriott, Jamie Oliver, Rick Stein, all those people. For us, it's always been a foodie place. Birmingham is getting cooler, I think - it's a cool city now. It was always one of those places which had a lot of negativity - “it's too industrial, it's too this, it's too that”. It's a beautiful city and it's definitely on the up, if not already up there. For anyone interested in good restaurants, this is the place to be now.”

Originally from Naples, Gino moved to London when he was 19 and worked in both The Orchard Restaurant in Hampstead and the Cambio Restaurant in Guildford.

“I moved because of my wife. I met my wife when I was 18. We were in Spain, we were in Puerto Banús. I used to be the chef at the restaurant and she used to be the waiter. I had just come from the south of Italy and I fell in love with her. Blonde, clever, huge knockers, beautiful eyes. Eyes, brain, hair, knockers - we'll put knockers at number four. You can't have them at number one; that would make me very shallow.”

Gino rose to fame as a regular chef on long-running ITV magazine show This Morning. He’s since presented cookery programmes including Let's Do Lunch, There's No Taste Like Home and Gino's Italian Escape, and has also taken part in I’m A Celebrity… Get Me Out Of Here! - which he won in 2009 - and Celebrity Juice. His most recent TV project is Gordon, Gino And Fred, a second series of which he’s just finished filming with Gordon Ramsey and First Dates’ Fred Sirieix.

“I cannot tell you a lot about this, but it's out in April. It's four episodes and we went to America. I think it was the best two weeks of my life - it was awesome! We couldn’t stop having fun. I know at work you shouldn't have too much fun, but I absolutely loved it. Sometimes there was tension between us        because we're three very strong characters - Gordon is the alpha male, Fred is the sensible Frenchman, and I'm the one who doesn't give a shit - yet we really gelled well together. I can tell you that we're going to Morocco and we're going to film a Christmas special.”

Having already successfully conquered a multitude of markets, Gino recently added  another string to his bow - children’s books. His first publication, Get Cooking With Wiskella, is guaranteed to get your little ones excited about food. All Gino’s books, his recipe books included, can be bought in Gino D’Acampo My Restaurant.

“The inspiration for Get Cooking With Wiskella came from my daughter, Mia. She's seven years old. She always makes up stories in her mind as to why she should cook. She pretends that she's with friends. As I was watching her, I was thinking, 'I can make this reality; I can actually come up with a character'. The character is a whisk that turns into a little girl. All the characters in the book are cooking utensils, and I made them into humans. Wiskella is a girl who loves cooking and who goes around looking for all the ingredients that she needs. Eventually she gets all her friends around and they cook together. Usually when you read a book with your kids, the experience ends once the book is ended. But at the end of Get Cooking With Wiskella there’s a recipe. So you read the book and then, at the end, the idea is that the children, the parents, grandparents or whoever say, 'Hey, why don't we do the recipe?' I've given them a full recipe - a pancake recipe - with the method. Wiskella explains exactly how she does it. The interaction doesn't end there - that's what's important to me. It's important to get kids interested in food and in cooking from a really young age. And on every page there is a little cat to find, too.

“My children cook and explore a lot with food. We have a rule in my house that anything I put on the table, they eat. If they don't like it, that's fine, but at least they've tried it. And when I say anything, I mean anything. I once got them to try donkey testicle with butter, sage, salt & pepper. It was quite good.”

Gino D’Acampo My Restaurant can be found at 61-63 Temple Row, Birmingham.