Ivo Dimchev doles out the dosh for P-Project 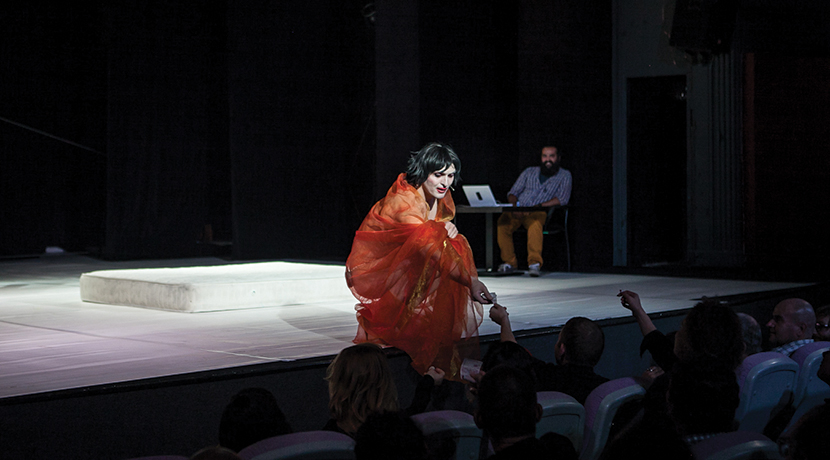 Performance artist Ivo Dimchev’s work is often described as provocative and ‘off the wall’. In a rare visit to the UK, Ivo next month performs in Birmingham as part of the city’s acclaimed BE Festival. Prior to that, he’ll be showcasing his musical prowess in a solo production at Birmingham REP.

In P-Project - an interactive performance based on several words beginning with the letter P - Ivo uses cash incentives to entice audience members to become involved. What’s On recently caught up with the Bulgarian artist to find out what audiences can expect from his shows...

How would you best describe your art form, Ivo?
Probably schizophrenic. I have very diverse interests and a big passion for theatre and acting. I guess it’s very messed up, but I’m very happy that these things - my different interests - can collide and support each other. Of course, it really depends on the context and where I present my work. When I have concerts in the music venues, I don’t pretend I’m a visual artist or a choreographer - I’m a singer-songwriter and I’m okay with that.

You sing, dance, draw, write and perform. Which of these came first?
Theatre was the first thing. I had a lot of trouble as a kid, which caused me to be bullied. I stepped into the professional theatre when I was 12 years old and channeled all my extravagance into that, which acted as a kind of relief. It was the first sense of freedom I’d experienced, and I was accepted for who I was. I was also singing all the time, but I didn’t take it seriously.

Who has inspired you the most as a performer?
When I was a kid, I was inspired a lot by Charlie Chaplin and Elvis. Later on in life - in my early teenage years - I liked Elton John. In Bulgaria he was the only gay artist I knew -and I needed someone to look up to.

Are you able to describe a typical Ivo Dimchev audience?
I’m very happy with the ‘contemporary art audience’ label. My shows have been described as provocative and difficult for some people, as they push boundaries. I know my audiences are built of elitists and my shows are not to everyone’s taste. Audiences are usually built up of artists, young students and kind of more intelligent people who know more about culture. They’re generally comfortable watching something they don’t really know and might not have an interest in. Now I’m singing songs, my audiences are expanding - I’m seeing children and groups of grannies at my concerts.

You have a very diverse vocal range. Have you received any formal vocal training?
When I was 20 years old I tried to study opera, but I was unhappy with it because of the restrictions you have when you try to sing.

There was always a right and wrong way to do things, and I didn’t like it. I got frustrated, so
I quit those vocal lessons. I started to develop my voice by myself. It’s always been a passion, but I’ve never looked at it professionally.

You’ve described your work as being provocative. Is there anywhere you’d dare not tread?
Nothing is forbidden. The more unusual the subject or topic is, the more interesting it is to me. Themes alone are not interesting; it’s the relations an artist creates between topics or elements that’s interesting.
I’m not a fan of violence; I’m very respectful and audience-friendly, I think. When I deal with a very difficult topic, I ensure that people understand the context, and that it won’t cause a sense of rejection or disgust. I’m very careful in my articulation if a subject is more forbidden, dangerous or weird. I have to be clear and precise because it’s very easy to offend people and cause them to leave. I don’t want to be that type of artist.

Tell us about P Project, which you’ll be performing at BE Festival...
P Project is the first project I did with dramaturgical interaction with the audience.  The whole project is made up from an idea based on elements of our failing. The show explores the taboos in our minds towards money. I offer money for people to collaborate with me on stage, whether it’s to write
or dance or do different performances, and I offer them part of my fee. The money is transferred on stage for the different tasks. Sometimes people in the audience feel uncomfortable about it - they connect it to prostitution or something really bad. Sometimes they blame me for showing how greedy people are and what they’ll do just to earn a bit of money. At the end of the day, anyone who performs on stage works for money - we just don’t see the exchange.

What tasks do you set your audience?
They’re invited to take to the stage to dance or perform whatever task I instruct them to do for money - £20, £30 or £40. These people aren’t dancers and it’s usually their first time on stage, so they’re naturally very shy. Their dance isn’t great, but they’re so beautiful in their vulnerability and shyness. It’s just what they are. There’s also a fake sex scene, which is sure to be a failure. The couple meet each other for the first time on stage and they’re just there to earn some money - £220, for example. Of course, as a sex scene it fails, but it’s so funny and entertaining.

Are audiences generally prepared for what they see in your shows?
I think so, yes. I’m quite experienced as a performer and I will make them feel very comfortable. Nobody is forced to do anything, and there’s nothing really horrifying or difficult.

How does the reaction of British audiences to your work vary to reactions in other European countries?
I’ve been invited to the UK twice in my life. Because my shows’ genres aren’t very clear, it probably makes it feel uncomfortable for British audiences. I suppose there’s some conservatism in Britain, and this is probably one of the reasons I perform very rarely in the UK. I think it’s due to the UK’s performing arts scene being very compartmentalised - this is dance, this is theatre, this is a concert. If you blur the lines, it’s more difficult -  maybe not for the audience but for the programmers of the institutions.

What’s next on the horizon for you?
Right after my shows in Birmingham, I have concerts in Estonia, Portugal, the Netherlands and Vienna. I’ll also be in Vienna for a month teaching whilst performing some concerts. I’ve also been invited to audition for The X Factor, so I’ll be looking forward to that, too.

Ivo Dimchev performs his solo show, under the name of I-VO, at Birmingham REP on Saturday 30 June. He then returns to present P-Project (a co-presentation with Fierce) as part of BE Festival on  Tuesday 3 July.