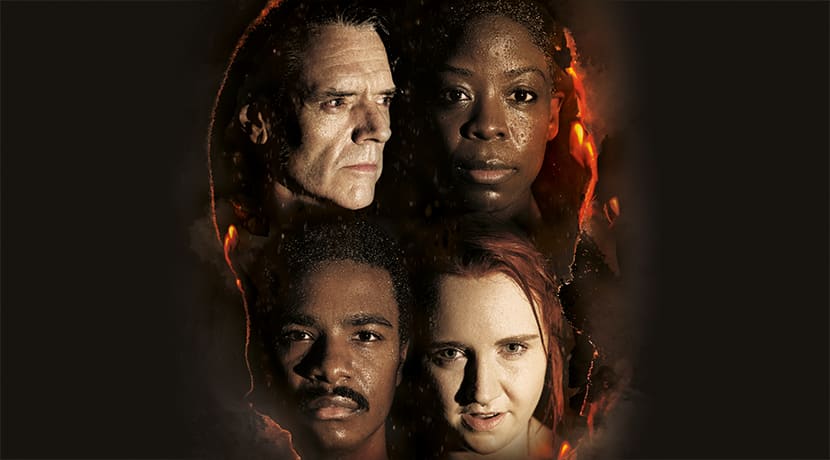 Journalist and dramatist Juliet Gilkes Romero talks about The Whip, her provocative new play about the British abolition of slavery...

New play The Whip captures the ‘moment’ when people of many different political persuasions collide in 1830s London. This Royal Shakespeare Company production explores the concerns of different people in Britain in the lead-up to the Slavery Abolition Act of 1833. What’s the price of the slaves’ freedom? Who should shoulder that cost? And why not focus on moral conundrums much closer to home?

“Abolition was delivered in Britain in 1834, following an Act of Parliament in 1833,” says dramatist Juliet Gilkes Romero, the woman behind the play. “Some 800,000 Caribbean slaves were freed following a compensation award to the slave owners in the Abolition Act. But actually, afterwards, the slaves were required to work an apprenticeship of up to seven years because it was considered that they needed to prepare for their freedom.

That meant they continued working for their former owners for no pay, but the owners no longer felt responsible for their care because the slaves were no longer their property.

“Following wide-scale protests across the Caribbean, the apprenticeship scheme had to be abolished, and in 1838 slaves were finally free. I think it’s relatively unknown that the act which passed in 1833 wasn’t quite the abolition of slavery it claimed to be.

“The other thing that people will probably find surprising is the slavery compensation act itself. Money was borrowed - 40% of the government’s national budget - to pay off already-wealthy slave owners. It was £20million at the time, which equates to between £20billion and £23billion in today’s terms! Slave owners became fantastically rich. The loan for this pay-off ended in 2015, so if you were working in and before that year, then that’s where some of your taxes were going. For me, as a descendant of the slave trade, I was astonished to find that out. I got access to the actual Abolition Act from 1833 and the transcripts from the actual debates from the House of Commons. I’ve transferred a lot of the language that was used there and channelled people’s real concerns into the play. What really excites me as a journalist and as a dramatist is handing these untold stories over to the public. I wouldn’t say my writing is didactic; I’m exploring the handprint of the past on the present day, but through very human stories. I don’t want to be preachy, and The Whip certainly isn’t like that at all. I want my writing to pose lots of questions to the audience, rather than just telling them what to think.”

Juliet was spurred on to write the play by the general lack of knowledge Brits have regarding all aspects of slavery...

“On reflection I’m surprised that schools weren’t required to cover the Slave Trade more - it was the largest mass deportation of people in history and Britain played a huge part. For me, this has always been a burning issue. As a writer, I like to approach my work from an unusual point of view, so when I came across this idea of weighing up the worth of hundreds of thousands of people’s freedom against what Britain could afford in monetary terms, it really caught my attention. Britain had seen that the trade was both becoming unworkable and obviously morally wrong. They’d seen what had happened to the French in Haiti when their slaves rebelled, and they could see across the pond that America wasn’t coming to a compromise - a lack of compromise that eventually led to civil war, as the south was fantastically wealthy from the Slave Trade, while the industrial north wasn’t. The Abolition Bill was necessary, and although it was certainly flawed, Britain achieved it. That really should be admired in the context of the politics of the time. Britain was truly leading the way. The Whip really focuses on this fraught, intense battle Britain has between morality and economy. Britain really was leaping off a cliff not knowing the financial repercussions, and
essentially mortgaged the future of generations to come - a debt we only finished paying five years ago.

“While The Whip is a really important part of Black British history, it’s definitely a multifaceted story. What fascinated me about 1833 was that so much else was going on in Britain besides Abolition. In 1832, the Reform Act came about that meant men who weren’t landed gentry could vote. MPs didn’t get a salary, so it just wasn’t an option for working men who weren’t part of the elite. The general public really weren’t being represented in the House of Commons. The 1830s is where all of this starts to collide, and that’s what The Whip is all about. What happened in these years is really revolutionary. The Factory Act stopped children of a certain age working for more than 10 hours, as back then children as young as five were working in British cotton mills. So the piece isn’t just about the emancipation of slaves in the Caribbean, but also the emancipation of working children and the working-class in general.”

Very individual, human stories are central to The Whip. Many of its characters are based on real-life figures.

“The majority of the action takes place either in the House of Commons itself, or in the house of one of the politicians - the chief whip, Boyd, whose job it is to drum up support and deliver the Abolition Act through the Commons. He has a huge battle trying to deliver this, as many of the house have their own interests in cotton and the Slave Trade. We also meet Lord Maybourne - loosely based on Lord Melbourne, the then home secretary - and explore his machinations on either side of the debate. We also encounter opposition MPs led by a back-bencher who has slaves and has been made head of the West India Committee, which was a pressure group making sure slave owners were properly compensated for what they would get per head of slave. Many MPs in the Commons were either slave owners or had cotton factories in Britain.

“Another character, Mercy, is based on Mary Prince, a runaway slave who came to Britain and became the first black woman to deliver a petition to parliament. She spoke about her own experience of the dreadful, inhumane abuses on the plantations. In the play, Mercy is working very closely with the chief whip to try and deliver this act.

“Another prominent woman is Horatia, who has fled working in the north and lost her child from being crushed to death in a cotton mill. She represents that side of the British story. She ends up working in the home of the chief whip, and her interest is in the state of Britain’s factories and getting children out of those working conditions, rather than being concerned with the fate of slaves in a far-off colony. So when these two women meet, they’re rivals in some way and have different political agendas, but they slowly begin to realise the commonality in their causes.

“Horatia and Mercy are examples of the early seeds of women’s suffrage. There’s a very clear narrative when we think of the suffragettes paving the way for women to vote, but their battle started way, way before then. While men certainly had the political voice in the 1830s, women have a very strong voice in The Whip. So the piece is certainly also about the emancipation of women, and that definitely resonates today. I don’t think enough has changed, particularly if you look at the proportion of women in modern slavery, or the gender pay gap. Mercy and Horatia are both very strong, intelligent women who go about politics in different ways.

“The Whip is all about how important it is to be heard. Another character is Edmund, a young, escaped slave who Boyd has taken in and raised to be an English gentleman. So we also have his story, about what it means to completely lose who you are; how it feels to be plucked from your home, your family, and suddenly have an English home instead. So the play explores many different identities that Britons can relate to.”

Juliet is certain The Whip has universal resonance: “This play speaks to so many different aspects of British society, regardless of background. The Whip has a full 360-degree view of 1830s Britain that resonates today and tells a powerful story that I hope opens up many discussions. When I see theatre, I want to be set alight with passion and continue to debate well beyond the curtain falling - and I think The Whip will do that.”

The Whip shows at the Swan Theatre, Stratford-Upon-Avon, from Saturday 1 February to Saturday 21 March.