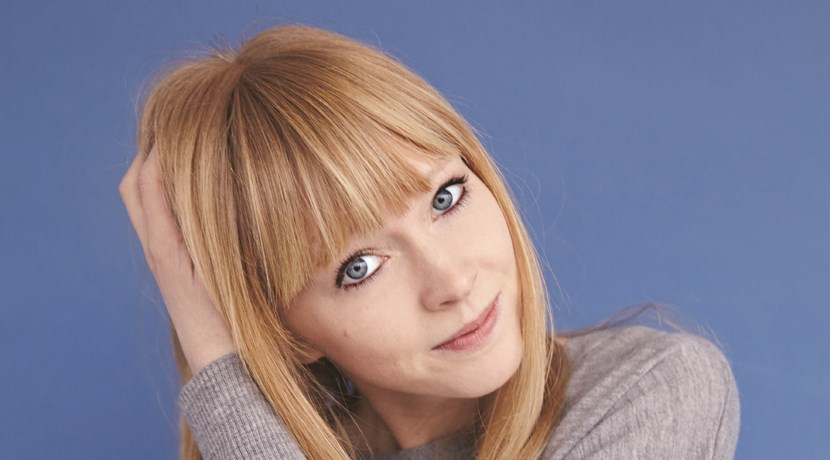 Hailing from Rowington, Warwickshire, Lucy Rose first came to prominence as guest vocalist on Bombay Bicycle Club’s 2010 album Flaws. She’s since established herself as an artist in her own right thanks to her lauded debut album, Like I Used To. Now, three years on, she’s back with Work It Out, a top ten release that features a broader, bolder sound. “I wanted to evolve, I wanted to keep things exciting,” she says. “I don’t want to make the same music over and over. And I’m hardly rapping. It’s 100 per cent me, you’ll recognise that I promise.”

It’s been three years since your debut; how did you work it out?
For the new record I wrote about fifty songs and did tons of demos, which I had to whittle down. I recorded 17 songs. That’s the most difficult part, what goes on, and what’s the sequencing. I love all the songs I’ve recorded ... all of them, so it’s more about the overall mood of the album, mixing light and with dark, light shades and dark shades.

Where did you start writing for it?
A lot of it was written on the road while I was touring the last album, which was one of the most inspiring places I could have been. Every day, we were playing music, every day we were meeting new people, and that ended up with me writing every day.

Did writing while on the move influence the songs?
There’s a song called Koln, which was written while we were in Germany, in Koln [Cologne], and there’s another about Sheffield, so that experience of travelling, being on the road, runs through some of the songs … and also there’s songs about people I’ve met at gigs, people who’ve handing me a letter to tell me how I’ve inspired them or what a song meant to them - I’ve inspired them and that’s inspired me.

You made your first album at home, yourself, but with this one, you opted for a recording studio.
Yes. The first album was recorded in my parents’ living room, so it was quite interesting to go and do this one in a studio. I was thinking as I went in, I’d never done this before, I’d never recorded music in a proper studio before. It was recorded in North London, and it was kinda perfect. But it felt quite surreal to go into a studio – most people forget that I recorded at my parents’ house, and suddenly I was in this studio with lots of history and it felt properly surreal.

Like I Used To was such a success, fans expected a swift follow-up, but it’s been three years – why the delay? Was that part of the plan or just how things turned out?
It’s not been the quickest of processes. Last time it was very quick - I recorded the album in January, had a record deal by May and it was released in September [2012]. But this time, we were sitting on tracks for a long time and I was wondering ‘are there definitely enough good songs?’

When did you know the new album was ready, that there were ‘enough good songs’?
I’m lucky enough to have some good people around me and I listen to them, but when it felt right … it felt right, you know? It felt like the right time to put it out there. I was waiting for it for a long time, for it to be the best you can make it before it’s out there. It did all come together in the end. The songwriting was the hard bit, although the organisational part can be gruelling in its own way – the planning, the videos and the promotion - but that’s just something you have to go through…

Your new single is Till The End – can you tell us a bit about the track?
That track was written once I’d been given the all-clear on the album. I’ve given it over [to the record label] and they’d signed it off, it was finished. I felt a huge weight had been lifted, the pressure was off, and I felt the most creative I’d felt in ages, and wrote that song a few days later. I did a rough demo and sent it to my producer [Rich Cooper] and he said ‘we need to get that on the album!’ So it was totally the reverse situation of what the label had been doing to me … I was the one saying, it’s not finished, that I needed to add to it, that I needed it to be as strong as it could be. We recorded it the day before we went on tour back in March, we didn’t go through 10 different versions, we just did it, and suddenly it was on the record!

You’re well known as a guest vocalist, working most famously with Bombay Bicycle Club but also Manic Street Preachers and Peace. Any more recent or forthcoming collaborations you can tell us about?
I sang on Ghostpoet’s new record, Shedding Skin, which I’m very honoured to have been asked to do. The song - Sorry My Love, It’s You Not Me - is brilliant and his album is so brilliant. There’s a couple of collaborations on my record, Rae Morris and Sam Brookes are on a couple of tracks - it’s nice to have a couple of contrasting, different voices on there.

How did you meet Obaro Ejimiwe, aka Ghostpoet? He lived in Coventry for several years …
He just got in touch with me after he was nominated for the Mercury Prize for his first album, Peanut Butter Blues And Melancholy Jam, and just said he really liked my voice - it was very surreal!

You must have experienced a fair few surreal / ‘pinch me’ moments over the last few years. Any others spring to mind…?
Neil Young at Hyde Park last year. He is amazing! Neil Young was one of the biggest references for my first record of capturing character over perfection. I was madly impressed by him. My booking agent was so excited to tell me when it was confirmed - to be playing on the same stage as Neil Young at Hyde Park. There was so much about seeing him and seeing him on that stage...

Did you get a chance to speak to him?
I was definitely not brave enough to speak to him – I’d never have been able to do that. I met David Gilmour recently and I just talked at him for five minutes, and walked off. I don’t know what I said. So I’m banning myself from talking to my heroes. At Hyde Park, I was just perving over Neil Young’s guitars, just standing there for ages, looking at them and thinking that there were so many great songs written on those guitars! That was great.

Are you still selling your own brand of tea at gigs?
Yes! I’ve just had a huge tea delivery to my flat.

What’s the blend?
It’s a very complex blend [laughs], it’s about two parts English Breakfast Tea to one part Earl Grey. My family all like different tea, some like Earl Grey, some Breakfast, so I just used to say, instead of making them each a pot, just put them in the same pot… ‘c’mon guys, let’s meet in the middle!’

As a tea addict, how do you cope when you’re abroad? What do you drink instead of tea…?
Coffee! It’s awful! I’ve had to evolve. The tea in other countries isn’t the same, and I’m saddened by having to drink bad tea ... so I don’t. Which is why I drink coffee. Also, we’re up late so need it. [Coming back from my recent tour] as soon as I got on the ferry back from Europe, I said ‘I’m having a proper cup of tea, a real PG Tips.’ And I did and it was delicious!

How do you like your brew? Do you have a routine, for example warm the pot or milk first?
I like my tea really strong but with a good splash of milk. But not too milky. Do I have a tea drinking routine? No. Sometimes I put the tea bag in the hot water and then the milk, sometime the tea bag goes in before the milk, then the water. It just depends on how I’m feeling at the time [laughs].

Are you looking forward to the Warwick Arts Centre gig?
It’s a hometown show! I feel like a bloody nervous wreck. My parents will be coming and I’m sure my mum will have a gaggle of all her friends, all Warwickshire ladies. You have to go home at Christmas and people always ask, ‘how’s the music going?’ so I want to blow everyone’s socks off, so when I bump into them in the supermarket they say ‘Oh I loved it!’ first. That’s my hope for the gig.

You cut your teeth playing open mic’ nights in London. But before you headed to the capital, did you play much around Coventry and Warwickshire?
In Coventry, I did one gig at the Kasbah when the first record came out, but I didn’t want to play in Coventry or around, to people I knew, which is why I went to London and played to strangers. If it all goes bad at Warwick Arts Centre … I may never come back! [laughs]