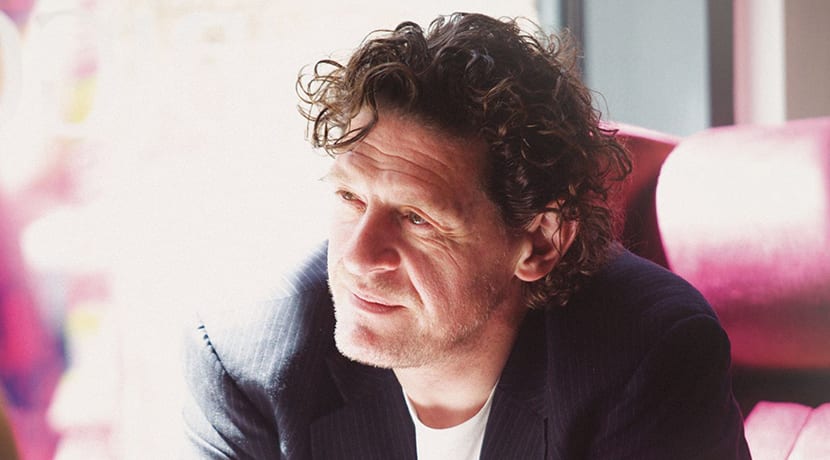 The youngest ever recipient of three Michelin stars and a man considered by many to be the greatest UK chef of all time, Marco Pierre White has trained a number of high-profile and hugely popular fellow ‘kitchen creatives’, including Gordon Ramsay, Mario Batali, Curtis Stone and Shannon Bennett.

Owning a staggering 42 restaurants in the UK alone, three of which are in Birmingham, he’s recently launched a new menu at his Steakhouse Bar & Grill venue, located at the top of the city’s iconic Cube.

Steak sits at the heart of the menu, with cuts including fillet, rib-eye and chateaubriand. The starters menu features a classic eggs benedict with Woodall’s ham and Mr White’s Scotch egg with Colonel mustard sauce, which Marco himself singles out as a particular favourite.

His liking for diversity is in evidence throughout the menu. Stand-out plates include Wheeler’s haddock fish cake with poached hen’s egg and Connaught’s shrimp curry - both perfect for fish lovers - as well as a honey-roasted bacon chop and a classic chicken Kiev. Croustade of eggs Maintenon Maxim’s and creamy polenta with wild mushrooms are ideal dishes for vegetarians.

“Everything’s seasonal, really,” says Marco, in talking about his new menu. “It rotates, but there are certain things that we keep. We’ll never take off the French onion soup or, of course, the steaks. But also, you have to take into consideration vegans and vegetarians.

“I was a vegan for nine months because I was curious. I went pure vegan for nine months of my life and stopped absolutely everything - all carbs, alcohol, smoking. The first three weeks, it didn’t impact on me at all; the next six weeks, I became very weak, introverted, quite faint, dizzy at times and suffered from headaches. Then I sort of went back to normal after that. I must confess, though, I slept better. I had more energy. Through that nine-month period, I lost five stone in weight; it just dropped off me. My sense of smell became incredibly acute - I could walk down the road and smell coffee 100 metres away. I could smell bread being baked.”

Even with so many benefits to following a strict vegan diet, Marco decided it wasn’t for him: “I found myself staring at roast chickens and roast beef. Cheese boards were staring at me, almost to the point where I thought they were moving. The brie was walking across the plate. I was never fulfilled. I was never full. I was always hungry. I was never comforted. For me, food has to be comforting. I thought, this is boring, and I missed all those delicious things so much, so I went back to them.

“That’s why I prefer something in a pot rather than a pan. I like a great stew, I love dumplings, risotto, a big pan of pasta; I love a big roast. I see these chefs talking about veganism and vegetarianism, but you can’t really talk about it unless you’ve tried it.”

Marco has also just launched a new menu at his Bardolino restaurant on Wharfside Street at The Cube.
The menu is focused around his belief that good-quality food should be an experience that’s shared and enjoyed with friends and family, whatever the occasion. Featured cuisine includes a number of classic Italian-inspired dishes such as: rigatoni ragu of Scottish beef bolognese with aged Italian cheese; baked Tuscan sausages with cannellini beans and pomodoro sauce; and crispy butterfly prawns fritto misto.

“This is the way that restaurants are going, because this is how people are living nowadays. They like to eat out once, twice or even three times a week, even if it’s just going to somewhere casual like a pizzeria. People want affordable glamour, and they want some fun. I like casual. I like affordable. And I like glamour. We live such fast lives that it’s important to have some escapism, so going to your local pizzeria for something to eat or even just a coffee can be an escape.”

Despite his love of glamour, Marco admits that if he’s cooking a meal for himself, he likes to keep it simple: “Maybe I’ll have an omelette for dinner, a cheese omelette - delicious. That’s fine for me. Perhaps a ham sandwich with good English mustard. Maybe a Scotch egg if one of my boys has made them and I steal one. I like real simplicity.”

So is there anything that Marco won’t eat?

“Chicken’s feet! I’m not looking for a soulmate. I don’t get sucking feet; it really confuses me. I accept they’ve had a manicure before they’ve come to me, but it doesn’t do it for me. I’m really into strange food, don’t get me wrong - I like eating. Eating is one of my great passions in life. I went to this restaurant in Singapore and she said, “Marco, I’ve got something special for you tonight”. They’re fascinated that I love tendons - they’re so delicious; they’re one of the most delicious things I’ve ever eaten. I asked what the special was and she told me it was a surprise. Cow throat! Not for me. Can you imagine eating windpipe?! I like a pig’s trotter, I like pig’s ears, I love pig’s head, I love all of that, but when it comes to eating windpipe, no. I said, ‘Look, it’s not for me, please apologise to the chef’. It was horrific! The texture was disgusting and it doesn’t taste of anything. Chicken’s feet, they take some doing. Windpipe is another question.”

From Hell’s Kitchen to Masterchef Australia to White’s Kitchen Wars, Marco has done a lot of TV work over the years. So does he have anything else in the windpipe - sorry, pipeline?

“How boring! I can’t stand it, but, like yourself, I have to make a living. I’ve just finished filming a series now. I don’t like it. It’s the most boring thing. In all my contracts now, they’re not allowed to tell me what to say. Nothing scripted. I’ve worked on TV shows when they’re scripted. There’s no emotion. Can you imagine being told what to write and how to write it? Boring. It’s systematic and they’ve sucked the emotion out of it."

As our thoroughly enjoyable chat draws to a close, the charismatic and ever-so-charming Marco offers some advice to any working-class Brummie who fancies becoming a respected chef: “Well, firstly, the advice I would give is, if you go for a job, keep your fingers crossed and hope that you get it. By not asking ‘How many hours?’ or ‘How much am I getting paid?’, your chance of getting the job will increase enormously. There’s nothing worse than conducting an interview with someone who’s 19 years old and they ask you those questions. So actually, you’re not coming in order to learn? How stupid! What I learnt in my life is that knowledge is your passport to freedom; it really is. My father gave me that advice as a young man. He also told me to never call in sick. Turn up for work if you’re ill; the chef will see you’re not well. The advice I would give is to conduct your interviews correctly. That’s not just for chefs, that’s for everything. I think what’s really important is to always be punctual. Maybe I’m old-fashioned, but that’s what I think you should do. I used to go to interviews and sit there with my fingers crossed, praying I got the job. I remember I went for an interview with Pierre Koffmann - we’re great friends, Pierre and I, and have a business together and are working on a second deal - and he said to me, ‘I have no position in my kitchen’. It was the first and only time I’ve been turned down. I said - even though I couldn’t afford to - that I would work for nothing. I worked for three weeks for zero money, and I was really on the breadline. He called me and said, “Marco, I want to put you on the payroll”. Prove yourself. We live in such a disposable world now. People go in and out of jobs. When I was a boy, people didn’t walk out of jobs, people weren’t late. If you started work at 8, you turned up at 8 or earlier. How much do we pay a year for people to stand around on their phone? It’s a different generation.”

So what does Marco think about Birmingham’s ever-growing and truly impressive food scene?

“It’s a beautiful jigsaw - a melting pot of all the cultures. Also, because it’s the second city, it’s got all these businesses which bring money in, and then it allows people to pay for that. Birmingham is one of Britain’s great gastronomic cities.”