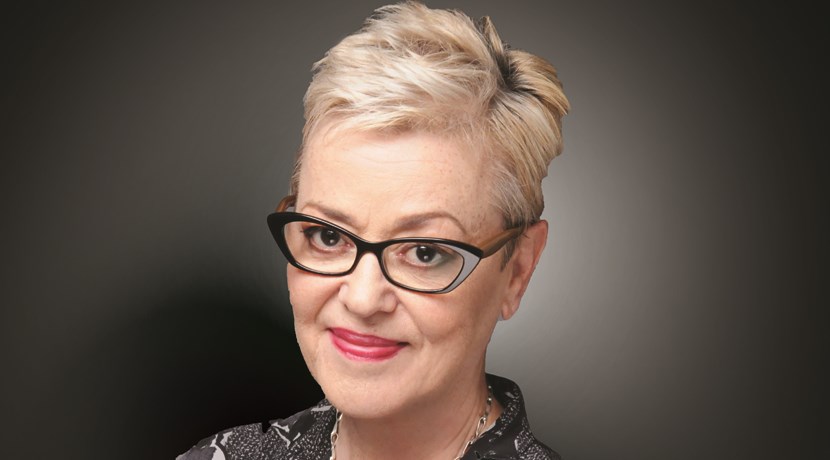 Whether it’s Bad Girls, Footballers’ Wives or episodes of Coronation Street and Waterloo Road, there’s no doubting writer Maureen Chadwick’s ability to produce gritty and entertaining storylines. This month sees Maureen’s latest theatrical venture make its debut at Coventry’s Belgrade Theatre. Featuring music and lyrics by her partner, Kath Gotts, Crush is a comic musical set in the early 1960s. What’s On recently met up with Maureen to find out what audiences can expect - oh, and to talk a little bit about Bad Girls..

Where did the inspiration for Crush come from, Maureen?
Both Kath and I grew up reading schoolgirl stories and absolutely loving them. It seemed a wonderful subject matter for musical comedy, and as far as we know it’s a genre that hasn’t really been milked by musical theatre. We felt we could have fun with the genre, salute it and, at the same time, put a new spin on it. The Spice Girls started off this whole girl power thing, which sort of made the feminist message contemporary. That’s resonant in the story, but the theme is really about girl friendships and that ‘all for one and one for all’ sort of spirit.

If there’s a contemporary feel, why the decision to set it in 1963 and not the present day?
In an early version, we thought the themes were timeless. We didn’t specify a time frame but then it became apparent that we should be selective. We chose 1963 because it represented the cusp of the transition into the ’60s. The Swinging ’60s hadn’t really got going and you’ve still got a ’50s flavour very apparent - but Dame Dorothea Dosserdale School for Girls is right at the forefront of change. The new, hateful headmistress who’s recently arrived there is trying to overturn the school liberationist values. She’s trying to turn back the tide on the sexual revolution and trying to bring back Victorian values. Dame Dorothea was set up by a campaigning Suffragette back in 1928 who would've seen education as the true gateway to emancipation and would've welcomed girls from all walks of life. In Crush, some of the pupils are fee-paying posh girls, one of them is an American, one is from an orphanage and another is the daughter of a fireman and clerk, so it embraces a real social mix.

How much of the musical reflects your own personal experience of schooling?
Both of us went to all-girl schools, so we’ve both lived in that world. We’ve certainly tried to channel our inner schoolgirl, as I suppose everyone else will. There’s also a stunning boy in Crush who appears in various guises and does indeed become the love interest for one of our girls. We’re hoping it will entertain a mixed audience of all ages.

How do you set about creating the characters, and do you have a favourite?
The way we work is very collaboratively. It always has to start with a story because all musicals, however marvellous the music is, need a story to hold everything together and motor things along. We chose characters to definitely represent the different types of girls and we got a great contrast between our deputy head and the horrible headmistress. Miss Bleacher the headmistress is quite fierce and reactionary and dear Miss Austin, who was herself a pupil at the school, is the keeper of the flame.

In your TV creations - Bad Girls, Footballers’ Wives and Waterloo Road - there’s always an element of shock and often controversy. Will these be evident in Crush too, or will it be pretty mild?
The tone of it is obviously very different because it’s musical comedy, so there’s an overall light entertainment spin to it. Nevertheless it touches on many similar issues. There are always going to be some people who’re going to be shocked about some things that the rest of us take for granted. I would say it’s only now that you can have a musical comedy which does indeed celebrate two girls falling in love. It’s a sign of the times that we can have such subject matter in family entertainment.

And do you have a character that you empathise with?
When you write the story you have to empathise with all of them. When Kath was writing the music for one of Jim Fenner’s songs in Bad Girls, she had to get inside the head of a sexual predator, which is not a nice place to be. When writing this we had to get inside the head of Miss Bleacher. You have to think, if I were her, what would I be saying and feeling? You have to identify with every point of view, but overall we know who we want to win and that’s the excitement of doing it, really. We like all the characters but for different reasons.

Does it all come good in the end?
Overall yes, but there are some twists and turns which may not be entirely predictable.

Did you know you wanted to become a professional writer even when you were at school?
I jointly loved art and English. I left school and studied art and subsequently philosophy. My original intention was to become a painter, but then I started taking writing more seriously and just switched over. I had an office job at the time where I was left alone for most of the day, so I thought, well I can’t paint here but I could certainly start writing some plays, and that’s how I got into writing. I got an agent and got my first TV commission, which was to write on Angels. Tony Holland, who created EastEnders, also created Angels, which was all about nurses. I then got my commission to write for Coronation Street. I’d never watched it before. I didn’t even know who Jack Duckworth was, so I had to catch up really fast. In all, I think I wrote around forty-five episodes, including the one when Hayley declared herself to be a transsexual. It was also when Deidre Barlow was in prison, so it was great fun.

The disciplines required for writing for TV and stage are very different. Which do you prefer?
I thoroughly enjoyed writing for TV but I don’t think it’s quite the same as it was when we were doing all our shows in Shed. I rather doubt that Bad Girls would be commissioned as readily now as it was then. We were very fortunate at the time that ITV had a fairly hands-off approach to let you run with things. They also gave you quite a sizeable series to start off with. We had ten episodes for our first series of Bad Girls. That gave us enough time to really garner an audience because it was the first prime-time TV drama series to have a central lesbian love story.

Where did your research take you when you were writing Bad Girls?
We went into several prisons. I had myself locked into a cell at one point so that I could feel the true claustrophobia of it all. It was all entirely research based. Obviously in TV drama more things happen at once, but unlike documentaries you can actually show stuff that a documentary camera could never access, so it really was fantastic to be able to open the doors to that closed world. Prior to that, people just didn’t really know much about women’s prisons. They thought women prisoners were either mad, bad or sad. We wanted to try and help people feel that it could be you, your mum, your sister or your daughter...

In complete contrast, you wrote Footballers’ Wives...
Yes, and I hate football. I’d never been to a football match before, but Footballers’ Wives was as much about football as Dallas was about oil. We proposed it to ITV and they commissioned us to write a series. Ann McManus and I were the lead writers and creators on all the Shed stuff, so we just threw ourselves into it. Our intention was for it to be a social satire. We saw it as a wonderful opportunity to look into that world of the young, newly rich, over rich, and all the mistakes you can make when you’re in that situation.

Is it true you got a roasting from some people about the show?
We’ve always had a roasting. Yes, we were termed ‘trash TV’. We were the proud bearers of that title. Basically a lot of male critics hated us. They didn’t think we understood the joke, which is just to give you a flavour of the level of patronising comments that came our way. But the public has always got the shows and we’ve won lots of awards for all of them. To begin with it was a bit of an uphill struggle but, unlike Bad Girls, I think Footballers’ Wives appealed to the ABCs, so it was possibly more of a middle-class pastime.

You’ve ticked the boxes for TV and stage. Would you ever consider turning your hand to a novel?
I’ve written a film script, which I completed a few months ago, so that’s me dipping my toe into another medium.

Do you and Kath always work together?
I write my plays on my own but we work together on musicals. Kath and I know how to work together efficiently. Kath gives me lines of dialogue and I give her lines of lyrics. Most of them get refused but we do find it very easy to cook things up together and chew over ideas.

Do you set yourselves ground rules to ensure you have a work/life balance when working on the same production?
I learned a bit of a lesson when working at Shed. It was so full-on at one point and my work/life balance was non-existent. So I think I would now know how not to get too bogged down. We do balance time off much better now, but that’s mainly because I can.

Is there a place where you’re most creative?
Sometimes it’s better to leave your office and go for a walk. Then things just sort of surprise you because they don’t always come from conscious thought. I always keep a note pad at the side of the bed. It’s a bit bloody annoying when you get an idea in the middle of the night but it’s always better to write them down than forget them.

So far your work has taken you to schools, prisons, on to the football pitch and into nightclubs. Is there a particular environment that you’d like to explore in the future?
Sometimes you just don’t know about the milieu until you’ve found the story or the character. We’ve got a few things cooking but I wouldn’t want to give away anything more than that...