Miguel Oyarzun talks ahead of BE Festival 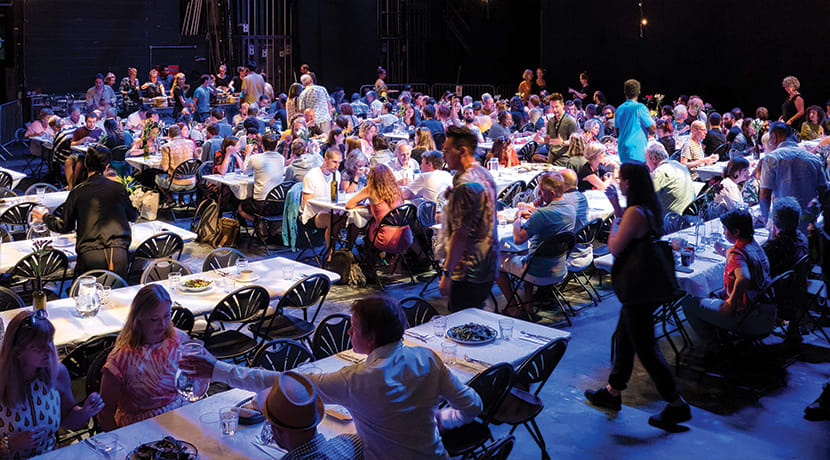 The 10th Birmingham European Festival takes place at the city’s Repertory Theatre this month. From its humble beginnings in 2010, BE Festival has grown exponentially into an event that places Birmingham firmly at the forefront of Europe’s performing arts scene.

“The first BE Festival resulted from a conference with the Arts Council in Birmingham to discuss how to improve the arts scene in the Midlands,” explains one of the festival’s founders, Miguel Oyazrun. “One of the things the cultural sector was discussing was the fact that there wasn’t a lot of international presence in the city. At the time, Isla Aguilar and I weren’t living in Birmingham, so we came as outsiders to the region.

We were baffled by the fact that the region didn’t have an international theatre & arts festival, despite the fact that the arts scene in the Midlands was craving this international presence. There were music and dance festivals, but nothing for the wider scope of performing arts. We took that as our inspiration. That evening, we went for dinner at a curry house and we started mapping our ideas for a festival on the back of a napkin. So it really was through a response to the needs of the cultural sector of Birmingham that BE was born.”

The festival is particularly focused on supporting upcoming performance artists…

“Giving a platform to emerging artists and performers from a range of countries across Europe is so important in our current social and political climate. The UK being an island already creates a bit of isolation from outside influences. The way funding for the arts works in the UK is already very different to the rest of Europe. It’s more difficult to get performances from outside the UK into theatres here than it is on mainland Europe. Nevertheless, the UK is really craving the artistic work from mainland Europe, and    people here really want to collaborate with those abroad. It’s all about building bridges across the cultural sectors of different countries, which is now more important than ever. BE Festival is a platform for exchange and encounter between cultures, which can only better the performing arts scene for all. We focus on emerging artists in particular because they are the ones who will lead the arts scene in the future. We do that with help from both the Arts Council here in the UK and also the European Union. It’s very important to give these upcoming performers a space to display their work, where they can thrive and become the artists of the future.”

With the number of applications from artists wanting to perform at the BE Festival increasing every year, choosing who to include is a challenging task: “When we started in 2010, we received 67 applications, which, at that time, we thought was enormous. Now, every year, we receive between 600 and 1,000 applications. Obviously it’s an enormous amount of work to go through all of those applications and assess which pieces will end up in the programme. We do it by watching them all and trying to create a balance within the programme between countries and disciplines. We also have a theme each year - this year we’re celebrating our 10th festival. There are pieces that look back on history or look into memory or into the concept of archiving. We’ve also commissioned works that relate to the theme.”

The relationship between the festival, Birmingham and the rest of Europe is one of BE’s defining qualities.

“Because BE Festival was born out of the desires of Birmingham, the whole thing was made possible by the generosity of the locals. This is a festival with limited resources, but with our ethos of collaborating, we have a fantastic team of volunteers. Supporting emerging artists is also evident in the way we work with our staff and volunteers. Our staff and volunteers are really young, and we’re proud to know that people who work with us go on to lead other cultural organisations or produce more festivals. Apart from the            volunteers who give their time, we also collaborate with hosts, who open their homes to visiting artists.

This is also a way in which we try to connect people across Europe, so that the audiences can create a more in-depth relationship with the visiting artists, and the artists themselves can really get to know the city and its inhabitants. At most other festivals we’ve been to, the performers come to the city, perform, book into a hotel and then leave the next day. So BE Festival is all about the artist being in touch with the city of Birmingham and vice versa. We hear lots of beautiful stories about artists returning to Birmingham to see their host family, or the hosts travelling to other places in Europe to visit the person they opened their home to. One of the things we love is creating bonds beyond the boundaries of the festival itself. The festival is really a catalyst for continuing exchange within arts and culture across Europe.”

So how much has BE Festival changed since its first year?

“The festival has grown massively over 10 events. We’ve grown in reputation across Europe and are perhaps even better known abroad than we are in the UK. Birmingham is now very much on the map of Europe. The artists who come from abroad, and audience members who return to mainland Europe, talk positively about Birmingham, the UK and BE Festival; they’re our best ambassadors. We’ve also grown in terms of rooting ourselves to Birmingham itself. We are now very much a continuing part of the annual calendar of events for the city, so we’re part of a bigger network within the cultural sector here. Then, every year, we have more audiences, so have expanded into a touring model. We started by just doing the festival here in Birmingham. Now we take the format of the festival - in which we present three or four short pieces each night - and the companies who best represent us, out on tour. We tour for four weeks in the UK and four weeks in Spain. The work presented by the artists in Birmingham now reaches many more people.

“We’ve also grown in our work with visual artists. Now we’re involved in a lot of bigger projects within the visual arts that run alongside the performing-arts side of the festival. Plus, this year is the first time we will have pieces on the main stage of The REP. Normally we have smaller-scale pieces in Centenary Square or in The Studio at The REP. This year, for the first time, we have a large show on The REP’s main stage. It’s a fantastic show called Deadtown, which has been created by the sons of the Oscar-winning director of One Flew Over The Cuckoo’s Nest, Miloš Forman. The Forman brothers have  created a spectacular piece with dancers, singers and acrobats that mixes circus with a homage to silent movies. It’s a show with no words, so it’s accessible to anyone from any age. It’s really great for families, as well as for adults who want to look back at the history of silent movies.

“We also have musicians from many different genres performing in the evenings - so there really is something for everyone to enjoy."

“As always, we like to get feedback about the festival from the audiences, stakeholders and artists. The festival isn’t ours, it’s Birmingham’s. So we will take it wherever Birmingham sees fit, as we feel we have to honour the way it was created and supported by the city itself. We have some ideas of where we want to go after these first 10 festivals, but first of all we need to figure out whether that’s what everybody else wants too."