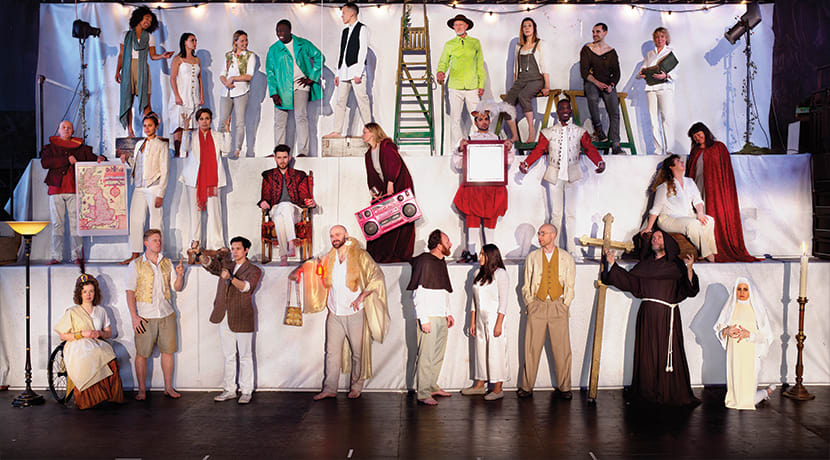 A collaborative cross-cast ensemble - reflecting the nation in terms of gender, ethnicity, regionality and disability - is this year presenting three Shakespeare comedies at the RSC, two of which open in the next few weeks.

What’s On chats to the respective directors of As You Like It and The Taming Of The Shrew to find out more about their brand new shows...

“This season reflects the power of storytelling in its most essential form,” says RSC Artistic Director Gregory Doran in talking about the company’s summer line-up of shows. “With directors Justin Audibert and Kimberley Sykes, I’m creating a company which reflects the nation in terms of gender, ethnicity, regionality and disability - 27 actors who will all appear in two out of three Shakespeare plays.”

The plays to which Gregory refers are As You Like It, The Taming Of The Shrew and, later in the year, Measure For Measure. And as you’d expect from a company determined to build on its commitment to inclusivity, the productions are reflective of society’s ongoing conversations about a range of issues, including the empowerment of women. This is strongly evidenced in the first of the three plays to open - As You Like It, directed by Kimberley Sykes. The play’s lead character, Rosalind, is credited with more lines than any other female Shakespearean character.

So was this something that attracted Kimberley to the play?

“Yes absolutely! I was drawn to a woman who’s busy working out who she is as the play unfolds. I think sometimes with Shakespeare’s women, it feels like they already know who they are. Or that their internal life isn’t really the thing that Shakespeare is exploring in the play. With Rosalind, it’s completely different. She changes her mind all the time, and she changes her mind with us, with the audience.

“She talks about this magician, this uncle magician, who she’s conversed with since the age of three. Lucy Phelps, who’s playing Rosalind, and I have talked a lot about who on earth this magician is. We feel that this magician is inside all of us, representing the potential for change and to be different people. The play is really all about Rosalind having a conversation with herself to find a route to contentment, and that’s not easy. Sometimes you have to crawl through the dirt to get to the diamond.”

Down the years, the character of Rosalind has been played for the RSC by numerous high-profile artists, including Peggy Ashcroft, Vanessa Redgrave, Eileen Atkins and Juliet Stevenson. Kimberley firmly believes that Lucy Phelps will be a worthy addition to that roll of honour: “Lucy is relentlessly intelligent and rigorous in what she, as an actress and as a woman, wants from the world, and she does all of that with generosity and the most infectious spirit. I think you have to have both of those things to play Rosalind. Lucy’s never satisfied as an artist. She’s always digging, always chipping away. But if you chip, chip, chip away in rehearsal, and then walk on stage and you’ve stopped chipping because you’ve decided what it is, then you’ve lost Rosalind - whereas Lucy has the bravery to keep discovering, to keep searching.”

What does Kimberley hope audiences take away from the production?

“I would like them to take away a new relationship with their own ‘magician’. To feel able to explore the possibility of and potential for change, especially right now, with all of the uncertainty in this country and Europe and the rest of the world. To feel that change is possible, and that change can come by working together, learning from each other and from being more honest; being brave enough to jump off the cliff into the unknown.”

Jumping off the cliff into the unknown is exactly what Kimberley’s fellow RSC director, Justin Audibert, is doing with The Taming Of The Shrew, which opens in Stratford next month: “I didn’t want to make a Shrew in the way it’s been done many times before,” says Justin. “I’m really interested in seeing what happens when you get female actors to play traditionally powerful male roles, and vice versa.

“So for example, the role of Petruchio, which we’ve renamed Petruchia, is being played by Claire Price as a woman in a woman’s costume, but with the same character motivations and social status as Petruchio in any other production. Likewise Katherine is being played by a male actor, Joseph Arkley, and he’s playing it as a man and will be wearing a man’s costume, but will have the same social restrictions that a woman in 1590s England would’ve had. The actors are playing their own gender, but we’ve flipped which gender holds power.”

So why has Justin decided to take such an interesting route with the play?

“At the moment, there’s an important conversation about gender and power and where that lies, and whenever you make any play or work of art of any kind, you’re always influenced by what’s going on around you. During rehearsals it’s been fascinating to see how things feel when, for example, a mother sells off her two sons, as opposed to in the traditional retelling, when a father sells off his two daughters. We’re somehow not shocked by the traditional version, but when we see a mother selling off her sons, that feels transgressive."

Justin’s version of Shrew certainly promises to be thought-provoking, but might it not also face accusations of being gimmicky?

“I can understand why someone might feel that, but I’d like to think that, as a company of 19, we’re going about this with a sense of intellectual curiosity and artistic enquiry. I think you have to come and see the show to make up your own mind. The fact that if you come, the vast majority of the lines are going to be spoken by women in those iconic roles means that the play is going to feel different to every other time you may have seen it.

“The late, great and much-missed Cicely Berry from the RSC Voice Department has always been my guiding light. She said you have to make the play talk to now - and that’s exactly what we’re trying to do with this production.”

As You Like It shows at the Royal Shakespeare Theatre (RST), Stratford-upon-Avon, from 14 February to 31 August.

The Taming Of The Shrew shows at the same venue from 8 March to 31 August.

Measure For Measure, directed by Gregory Doran, shows at the RST from 28 June to 29 August.