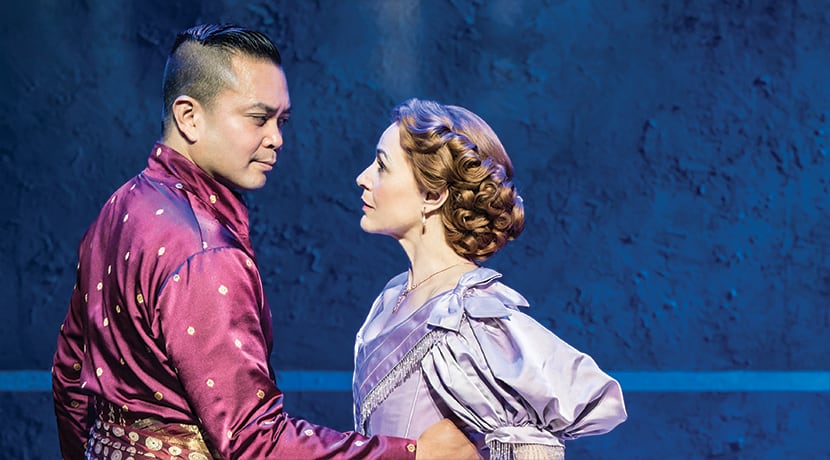 The King And I follows the flourishing friendship of the mid-19th century King of Siam and Anna, his children’s recently widowed British governess. Returning performers Jose Llana and Annalene Beechey explain more about this regal musical...

Rodgers & Hammerstein are one of the most famous composer-lyricist duos of all time. The release of their musicals, The King And I, The Sound Of Music and Oklahoma!, marked a golden age for the lavish world of musical theatre.

Reprising their roles in The King And I are Broadway’s Jose Llana and the West End’s Annalene Beechey,
Jose’s first professional acting role was playing a supporting character in The King And I over 20 years ago: “I can only describe the experience as someone inviting me to put on my dad’s shoes and walk around the house pretending to be him. My entry into performing was playing the Young Lover in the last Broadway revival in 1996, so I always saw the King as someone played by an older man; men who I looked up to. It’s been a complete joy and a profound experience to come back to this show, but this time I’ll be putting on the royal robes. Also, to have someone like our director, Bartlett Sher, to guide me through the process has been amazing. This production in particular has meant so much to me that I’ve stayed with it for the last few years. We did it on Broadway four years ago, toured the US for the last two years, and now I get to tour the UK with the lovely Annalene as Anna. It’s a very sentimental show for me in that way.”

It isn’t lost on Jose that The King And I seems to have more resonance today than ever before: “The biggest and most unfortunate similarity that American and British people currently share is that our governments are not really in the best situation right now. To perform in a show about a world leader
bringing Anna - a foreigner - in to help him educate his children seems to read differently in each venue we go to. In America, whether the audience is more conservative or liberal, it’s cathartic to see a story that was set 150 years ago still apply today. If our show can be an example of how you can lead with kindness, as opposed to leading with failure, we’ve done our job. There’s a line in the show that I say about the King fearing colonisation, so he wants to build a fence around Siam. This often reminds people about Trump wanting to put up a wall. So that got lots of laughs in the US - sometimes uncomfortable laughs, as it’s quite close to home! People thought we’d written that line into the show, but it was actually in the original script from when the show premiered 70 years ago.”

The King is quite a controversial character in terms of his attitude towards women, which Jose certainly recognises: “I approach his sexism as part of the growth that he makes within the show. I don’t defend the misogyny, but I have to remind myself of the way that life was structured in the Siamese monarchy. The polygamy was established so that he had blood ties to every province in Siam. The power of the story is that through Anna’s ability to show the King’s head wife, Lady Thiang, that a woman’s intelligence is not to be taken for granted, nor underestimated, she is able to prove that she’s not only equal to the King but actually knows more than he does. We’re really proud that The King And I is one of many examples in the Rodgers & Hammerstein anthology where there’s a strong, outspoken female character at the core. I’m proud to have my niece come to see the show and look up to Anna, Lady Thiang and even Tuptim. All three women test the system in very different ways, speaking their minds and demonstrating enormous strength.”

Bart Sher is the Tony Award-winning director behind this particular production of The King And I. So what have Sher and the other creatives brought to the table?

“We’re bringing the exact same show on tour as was on Broadway,” explains Jose. “It’s a different company, but still features Catherine Zuber’s costumes and Michael Yeargan’s sets. Sher went directly to the source at the Rodgers & Hammerstein Foundation and found the original script that they rehearsed with on day one of the original 1951 Broadway production. He went back to that script to revive many of the political lines that had been lost on the way to Broadway, as he wanted to remind the audience of the political climate in 1862. He also wanted to strengthen Anna’s and Lady Thiang’s characters to a greater extent than had happened in the past.

“We also have to remember that the show was written post-World War Two, when a lot of American and British audiences had never been to Asia. There wasn’t a lot of Asian representation back then, so there was a lot of orientalism and otherness on stage. The design was purposely slightly garish in order to be a little shocking. But now most people have at least seen photos or videos of the East. The challenge was to make it as opulent as they could, but also be respectful and authentic to the actual time.”

So what does Jose think is the reason behind the continuing popularity of Rodgers & Hammerstein’s musicals?

“They define family entertainment, and it’s great to be able to go home and talk about something important after a show too. A lot of their musicals - The King And I, The Sound Of Music and South Pacific in particular - address racism and difficult issues but in a comfortable way so that you can bring your children along. I think the genius of Rodgers & Hammerstein is that they’re able to relay these really important life lessons in a package of catchy melodies and beautiful songs. It’s so lovely to look out to the audience and see several generations watching together. There’s no better way to spend an afternoon with the family!
Annalene Beechey, who returns to the role of Anna Leonowens, agrees: “The King And I has such a connection to family, so it’s appropriate that we’re playing in Birmingham over the festive season; a time for families to come together and share in something special. This certainly gives the show its longevity.

“There are also some wonderful female characters in Rodgers & Hammerstein’s shows, at a time when there generally weren’t great roles for women. Occasionally, female roles are just seen as money notes and big songs. We have beautiful musical numbers in this show that involve intimate storytelling, such as during Getting To Know You, but they’re so much more than just pleasant tunes. Sometimes when you know a song so well, you have to stop yourself and really listen to the lyrics. They’re so relevant to what we’re dealing with today in terms of the UK being divided. The lyrics are ‘getting to know you, getting to know all about you, getting to like you, getting to hope you like me’. It speaks volumes.”

The King And I is based on Margaret Landon’s novel, Anna And The King Of Siam, which was in turn a fictional reimagining of the real Anna Leonowens’ memoirs. Anna was governess to King Mongkut of Siam’s children in the early 1860s.

“The company and associate director brought some books into rehearsals early on and, with huge respect to Deborah Kerr (who played the part in the film version), they painted a slightly different picture of Anna. This woman was extraordinarily courageous. She was recently widowed and had a 12-year-old son, yet she still moved to a country that wasn’t colonised to teach the King of Siam’s children. As a mother myself, I don’t think I would be brave enough to do that - even today, when everyone is more travelled. Anna is feisty, brave and not afraid to stand up for something she believes in. I wish I had a little bit more of that myself! But at the same time, she is very understanding of the King’s values and is accepting of what he’s trying to achieve. He’s trying to bring knowledge of her world into his, and in doing so, make his court and country more understanding of other cultures. They want the two cultures to progress together, which is extremely admirable.”

Such a huge role doesn’t come without its challenges, however...

“It’s a very physically and vocally demanding part,” explains Annalene. “There’s a lot of dialogue and long scenes, which are great to get your teeth into as an actor, but then you realise that you have to sing at the end too! Added to this, I’m in a corset for the entire three-hour show and carrying very heavy costumes - including the iconic dress for Shall We Dance?, which weighs three stone!”

And yet Shall We Dance is a stand-out moment for both performers...

“If we’ve done our jobs properly throughout the show, the audience will have been angry with us or laughed with us,” says Annalene. “So when we get to the moment during Shall We Dance? when we come together and the King takes Anna’s waist, you can often hear an audible gasp from the auditorium.”

“The audience has been waiting for this moment,” Jose adds, “and it’s a legacy we are happy to continue - if not a responsibility. People are waiting for that dress, and it’s a beautiful thing.”

The King And I shows at The Alexandra Theatre, Birmingham, from Tuesday 10 December to Saturday 4 January.

By Jenny Ell and Lauren Cole