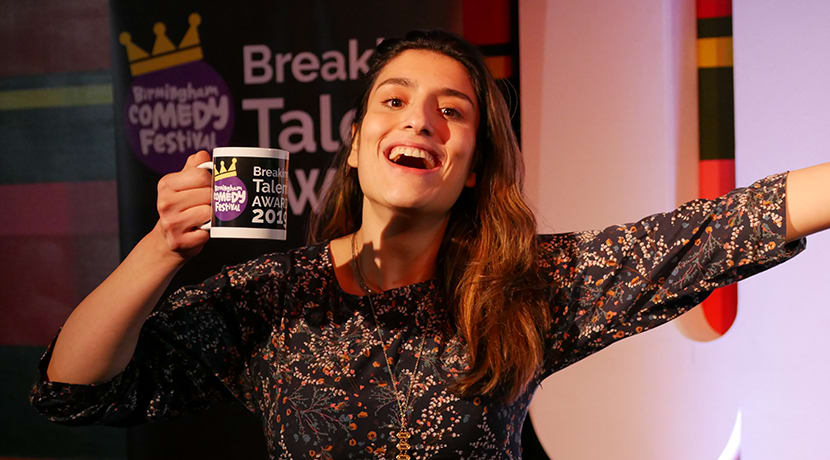 Celya enraptured a sell-out audience at The Glee Club on Friday night (4 October 2019), where she was presented with the region’s biggest comedy prize by BBCWM presenter Lisa Smith.

Originally from Paris, Celya’s win marked exactly five years, to the day, since she swapped the French capital for a welcoming Birmingham.

Picking up her award, she said: “It means a lot for me to be considered a Birmingham talent; it was huge just to have been nominated!”

Inspired by the likes of Dylan Moran, David Mitchell and American comedian/ actress Maria Bamford, as well as French trio Les Inconnus and the late humourist Pierre Desproges, Celya made her stand-up debut at Sutton Coldfield’s The Comedy Junction in early 2017, encouraged by comedian Karen Bailey.

“I’ve always had a love of stand-up, but never thought I’d do it. I kept talking about it for so long. Then Karen said I had to do something, and she gave me three days’ notice. I did five minutes, and went on with a glass of wine,” she recalls of her debut. “I got my first laugh and thought about it for the next three weeks.”

Despite the success, Celya recognised she still had much to learn, and spent the next two years defining her craft.

“For the first year of doing stand-up, you’re just getting used to being on stage – I wasn’t very good for the first year, I wasn’t a natural performer, I was really shy. The second year was learning to write jokes I liked. But you’re constantly learning in comedy, it’s always evolving.”

Discussing her comedic style, she says: “It’s really stupid, a bit daft, maybe a bit surreal, and a bit on the weird side. I just want to be myself on stage, as much as I can.”

As well as making appearances at clubs around the country, Celya, who is of French/ Algerian heritage, also runs her own monthly comedy nights at the Queen’s Arms and Red Lion pubs, both in the city’s Jewellery Quarter. Since being shortlisted for the Birmingham Comedy Festival Breaking Talent Award, she’s also made it through to the Funny Women competition finals, appearing at The Bloomsbury Theatre in London.

Looking ahead to the future, Celya says: “I want to write more, and I want to start thinking about going to the Edinburgh Fringe, maybe to do 45 minutes, or a double-header, but also trial more new material – I’m just trying to get better.”

The Jewellery Quarter-based comic faced stiff competition from four other emerging West Mids acts: Belfast-born TV researcher Mary Flanigan, who relocated to Birmingham’s Kings Heath at the beginning of the year; Erdington's Jay Droch, nominated just 18 months after his stand-up debut; the darkly challenging Adam Elmi, from Edgbaston; and Doug Carter, who recalled growing up in Bedworth, Warwickshire, during the 1980s.

In addition to awarding Celya the main prize, the judging panel were keen to commend Mary Flanigan for her engaging performance, which looked at the challenges of being a stranger in a new city, and pondered what might happen if the Mr Men and Little Miss characters were subjected to a CGI/ live action Lion King-styled makeover.

A spokesperson for the festival said: “Deciding on a winner is never an easy task, but our judges were impressed by Celya’s relaxed and confident stage presence, and the unpredictability of her material. She’s made significant strides in her comedy, particularly over the last 12 months, and has great promise.

“We very much look forward to seeing how she continues to grow as a comedian in the months ahead.”

A collaboration between the award-winning festival and The Glee Club, the Birmingham Comedy Festival Breaking Talent Award was set up in 2014 to recognise and support emerging comedic talent from the city and wider West Midlands.

On the first day of the Birmingham Comedy Festival, the sixth Breaking Talent Award at the Glee Club saw five stand-up comedians perform in front of a sell-out audience in a bid to win what is billed as the “West Midlands’ biggest comedy prize”.

The five comedians selected to represent the best in emerging talent (Jay Droch, Celya AB, Doug Carter, Adam Elmi and Mary Flanigan) drew on topics such as Greggs, Starbucks, Catholic guilt and living in Bedworth to develop jokes which ranged from the cleverly observed to the arguably lazy, but there can be no doubt that all the acts went down well with the enthusiastic Friday night crowd.

The compere, James Cook, held the event together and, while the judges were deliberating, Fern Brady entertained with a set of acerbic observations on life as a female in the 21st century.

The winner, Celya AB, was presented with a mug, and is also promised a (presumably much more valuable) boost to her comedy career.