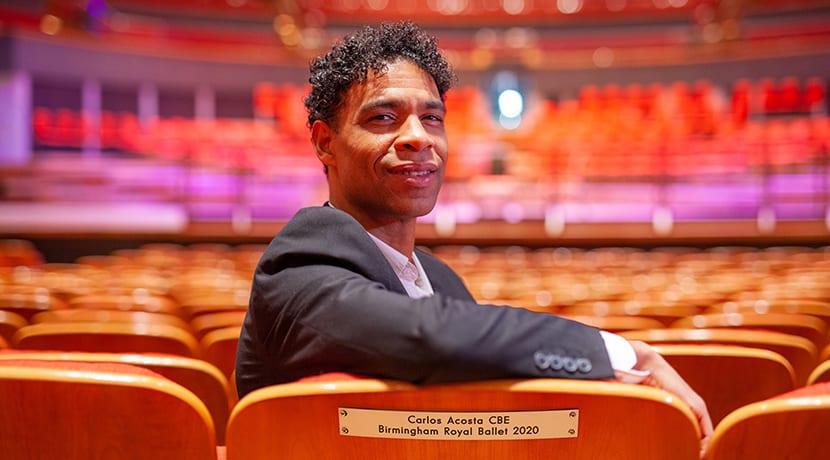 Birmingham Royal Ballet Director Carlos Acosta has been honoured with a plaque for his very own seat in the city’s iconic Symphony Hall, ahead of the Company’s A Valentines Celebration Evening of Music and Dance on Friday 14 February. Carlos is only the second artist to have a seat named after him by the venue, with the first being singer Tony Bennett.

Speaking about his seat dedication Carlos Acosta said; “It’s a huge honour to have a seat dedicated to me in the iconic Symphony Hall, not even in my wildest dreams could I have imagined this happening. I’m very grateful for this recognition and I only feel further inspired to do my very best for the city of Birmingham.”

Birmingham Royal Ballet and its internationally acclaimed orchestra, the Royal Ballet Sinfonia conducted by Principal Conductor Paul Murphy, will present an exquisite evening of romance, offering a perfect matchmaking of its world-class dancers and Britain’s most prolific ballet orchestra.

The evening will include stunning orchestral highlights from Puccini, Prokofiev and Tchaikovsky as well as sumptuous pas de deux from the romantic classical canon, including Swan Lake, Romeo and Juliet, Don Quixote and a world premiere of choreography by BRB First Soloist Kit Holder.

Nick Reed, CEO of Town Hall Symphony Hall said; “We are delighted to mark Carlos Acosta’s arrival in Birmingham by gifting a seat plaque in Symphony Hall. Carlos’ appointment as Director has really captured the imagination of the city, and is sure to have a positive impact within the arts and culture community in the West Midlands. As hosts of the annual Evening of Music and Dance production, we’ve maintained a wonderful relationship with Birmingham Royal Ballet – we look forward to it going from strength to strength.”

Town Hall Symphony Hall’s Name a Seat scheme enables donors to dedicate a seat to their favourite musicians and performances or to remember a loved one. Donations to the scheme support Town Hall Symphony Hall’s Learning and Participation programme, which creates musical opportunities and experiences for over 18,000 young people and adults each year, often from the local ward of Ladywood – one of the most deprived areas of the United Kingdom.