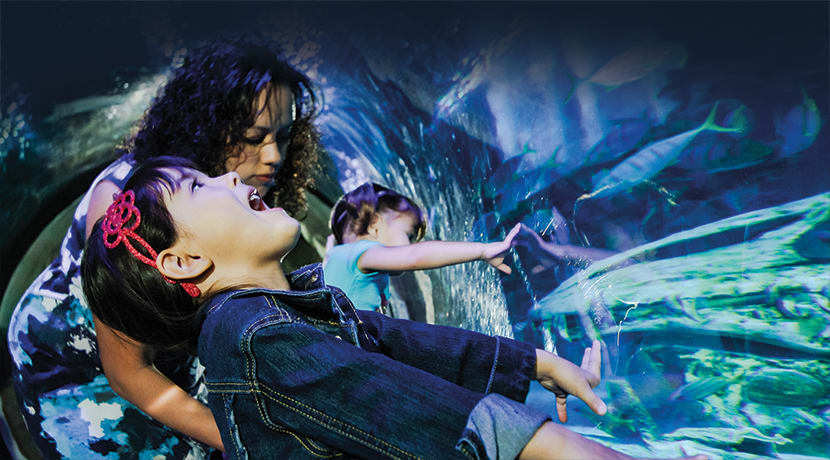 Located near the city’s Brindleyplace, the National Sea Life Centre is home to more than 2,000 creatures (including a colony of gentoo penguins, black-tip reef sharks and a giant green sea turtle). Many of the venue’s residents have been rescued or successfully bred as part of the global Sea Life breeding initiative.

Earlier this year, the centre welcomed the arrival of the UK’s first ever sea otters. Originally from Alaska, Ozzy and Ola are now permanent residents of Birmingham.

The centre’s popular Penguin Ice Adventure  is home to 18 gentoo penguins. As well as  learning about the quirky antics of this Antarctic breed, visitors can also enjoy watching them dive, splash and generally goof around in the water.

A successful breeding season has seen the arrival of a new baby gentoo, born to Prince and Hyacinth.
Other Sea Life Centre attractions include the interactive Piranha Tunnel and Jelly Invaders. The latter features a variety of breeds from across the world, including the moon jellyfish, the upside-down jellyfish and the ghost-like Atlantic sea nettles. There’s also Octopus Hideout, where you’ll meet Beverley, the venue’s resident Giant Pacific Octopus.

The centre dedicates a lot of time and hard work to its Breed, Rescue And Protect conservation project. This includes running programmes to help sustain endangered species, nursing sick creatures back to health before returning them to the wild, and campaigning to protect the marine environment from exploitation or destruction. There’s currently a tank in the Jelly Invaders area which houses nothing other than a number of plastic bags. This is to highlight just how much these bags can look like jellyfish, and the danger they can cause to underwater creatures who mistake them for their food.

Other Sea Life Centre highlights include the 4D cinema, the zebra shark in Shark Lagoon, the Clownfish Kingdom tunnel - a favourite with children who like Disney’s Finding Nemo - and the UK’s only tropical Ocean Tunnel, featuring darting sharks, gliding rays and rescued turtles.

There’s so much that goes into the upkeep of the centre. Every fortnight a fresh batch of sea water is brought up from the South Coast, and every three months, a new shipment of seaweed arrives. The cleaning and maintenance of the tanks happens sporadically during visiting hours. There are allotted feeding times during the day, so if you want to see the inhabitants dining, plan your visit with this in mind.
With so much to enjoy, families are advised to allow at least two hours to get the most out of their Sea Life Centre experience.

All tickets must be booked in advance in light of Covid-19 social-distancing measures.

For further information and to book tickets, visit visitsealife.com/birmingham