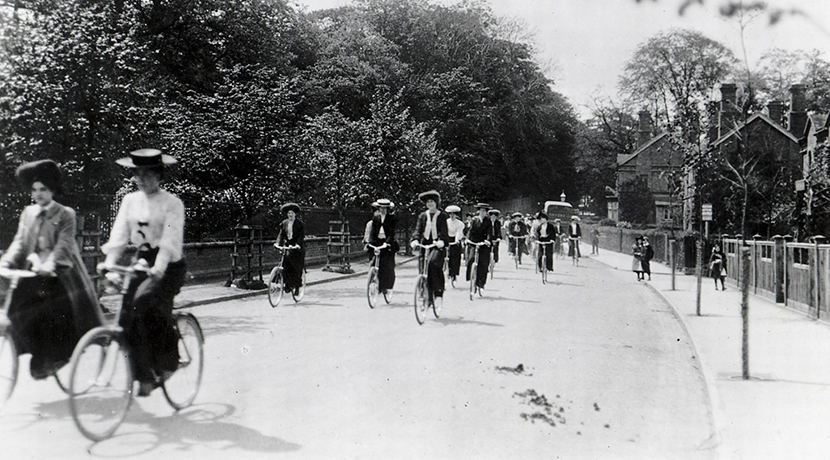 An exhibition of some never-before-seen archive photographs documenting ‘the sweet life’ of residents living and working in Bournville is to go on display this September.

‘The Sweet Life in Bournville’ exhibition will reflect on life in the village, founded by social reformer and chocolate-maker George Cadbury, over the last 100 years.

The images, some of which have never been on public display, include one of female factory workers cycling to the Cadbury plant along Bournville Lane in 1905.

The fascinating exhibition, which goes on display on 14th September, has been put together by the Bournville Society History Group and Bournville residents to mark the centenary of Bournville Works Housing Society.

Bob Booth, Chair of The Bournville Society, said: “This is the first major show of historical photographs for some time that reflects on life in Bournville over the last hundred years.

“It has been a pleasure to work alongside residents to plan the exhibition which offers a wonderful insight into both working at Cadbury and living in such a unique and beautiful place.”

Theresa Gordon, Community Services Co-ordinator at Bournville Village Trust, said: “Residents were really keen to show how life in Bournville has developed over the last 100 years and I think the exhibition reflects this perfectly.

“As well as being able to view the photographs on display, visitors will also be able to read a fantastic poem about life in Bournville, written by residents with poet Dr Philip Monks, and see an amazing chocolate creation sculpted by chocolatiers at Cadbury. It’s an event not to be missed.”

‘The Sweet Life in Bournville’ exhibition will be available to view on Saturday 14th September from 10am-4pm at Bournville Village Trust, 350 Bournville Lane, Birmingham, B30 1QY.  It is part of Bournville Heritage Open Day which will see 15 historic venues throw open their doors for a free day featuring tours, exhibitions, activities and family fun.

Bournville Village Trust was founded by chocolate maker and philanthropist George Cadbury in 1900 and is a housing association and registered charity. Its vision is to create and sustain flourishing communities where people choose to live and it provides services to 8,000 homes of mixed tenure and 25,000 people.