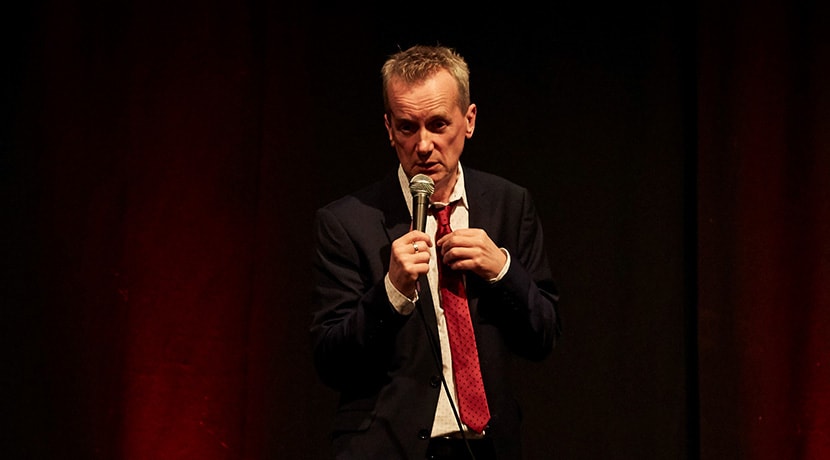 Following a completely sold out five-week run at the West End’s Garrick Theatre to start 2020, Frank Skinner is taking his critically acclaimed show, Showbiz, back on the road with an additional 14 dates nationwide, including a date at The Alexandra Theatre.

Frank commented, “The more people like this show the more I want to do it. There were some places I didn’t do on tour and some I did do that sold out extremely quickly. So now I’m refreshed, refueled, and raring to get back out there.”

Frank announced the Showbiz tour during a non-stop 10-hour radio show, which marked the 10-year anniversary of his hugely successful career at Absolute Radio. Frank’s award-winning show, The Frank Skinner Show, attracts over one million listeners per week, has achieved 10 million podcast downloads and saw him inducted into the Radio Academy’s Hall of Fame in 2016.

Frank Skinner’s live career began in 1987 when he spent £400 of his last £435 booking a room at the Edinburgh Festival Fringe. Four years later in 1991 he returned to the city and beat fellow nominees Jack Dee and Eddie Izzard to take home comedy’s most prestigious prize, The Perrier Award. Frank’s last live stand-up show, Man In a Suit, sold out its debut run at London’s Soho Theatre and a subsequent five week residency at the Leicester Square Theatre. Frank performed Man In a Suit for 24 consecutive nights at the Edinburgh Festival Fringe in 2014 and went on to release the show on DVD through Universal Studios UK.

Away from the stage, Frank’s TV credentials in 2018 included writing and starring as Johnny Cash in Johnny Cash & the Ostrich - a one-off special forming part of the successful Urban Myths series airing on Sky Arts, as well as hosting a seventh series of BBC1’s Room 101.

As England made their World Cup run last summer, the iconic football anthem Three Lions, written by Frank alongside David Baddiel and The Lightning Seeds, topped the singles chart for a fourth separate time - the first time a single has ever reached number one on four separate occasions with the same artist line-up.

Frank created The Frank Skinner Show (ITV), which is widely credited as setting the tone for the modern comedic chat show and ran for nine years, attracting 11 million viewers at its peak. He hosted three series of Frank Skinner’s Opinionated for BBC Two, and recently presented a one-off documentary, Frank Skinner on Muhammad Ali, for BBC One. In 2014 Frank guest starred in an episode of Doctor Who.  With David Baddiel, Frank created and presented Fantasy Football and Baddiel and Skinner Unplanned (ITV).

Alongside his regular show on Absolute Radio, Frank has carried out exclusive feature interviews for the station with a number of esteemed guests including Nobel Peace Prize-winning former Vice President Al Gore and Russell T Davies, former executive producer of Doctor Who. Frank has also written and starred in three series of the critically-acclaimed comedy drama series Don’t Start for BBC Radio 4 and has created and hosted two series of his comedy panel show The Rest is History for BBC Radio 4.

As an author, Frank Skinner has published Dispatches from the Sofa; a collection of columns he wrote for The Times over a two-year period and has written two autobiographies, the first of which, Frank Skinner, was the top selling autobiography of 2002, spending 46 weeks in The Sunday Times Bestseller List. The second Frank Skinner On The Road, chronicled his 2007, sell-out return to stand-up.

Frank Skinner visits The Alexandra, Birmingham on Sunday 10 May.

Tickets go on sale at 10am on 14 February here