Idiot Child: What if the Plane Falls out of the Sky? Review 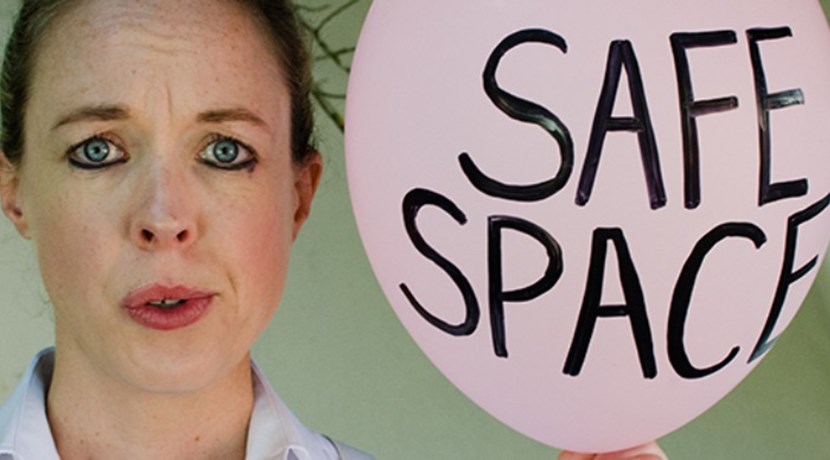 “What if I smell of oniony sweat?” “What if I die and people go through all my personal messages and internet history?” “What if they plane is actually only staying in the air because I’m thinking really positive thoughts about its wings?”

These are just a handful of the paralysing everyday anxieties and phobias running rife in Idiot Child’s “What if the Plane Falls out of the Sky?”, an off-the-wall, interactive experience in which audiences are invited to confront and overcome their worries in a specially designed “Fear Camp”. Which is, incidentally, absolutely nothing like as terrifying as it sounds.

Led by the outwardly bossy and controlling but clearly deeply insecure Heron along with her American alter-ego, Geoff Fuller (Susie Riddell), a trio of feather-brained siblings bring us face-to-face with phobias, crushing self-doubt and existential dread, building towards a triumphant conclusion in which everyone is able to declare themselves “good enough” and also “a fucking hero” to boot. Along the way, we’re furnished with an array of coping tactics (from drinks and snacks to coloured rubber “breathing bags” for releasing tension), as well as drip-fed details of our hosts’ back-story, allowing us to slowly piece together a rough idea of the events that led them here.

Inspired by her own almost insurmountable fear of flying, writer/director Anna Harpin focuses her story on a group of little birds struggling to cope without their parents. How literally or metaphorically you want to read all this is up to you, but the essential elements of the plot are that the three have been abandoned by their mum and dad, whose return they have been eagerly awaiting for several years. In the meantime, the eldest, Heron, has taken charge, and is attempting (with limited success) to instil in her brother and sister the confidence to leave the nest and fly free without fear in the big wide world beyond. Like a Scouts group, each achievement sees them awarded a new badge – Heron herself sports a jacket positively jangling with them. In a nod to the production’s origins, they also spend most of the show clad in air steward-inspired gear, and at one point engage in a dance routine based on aeroplane emergency procedure demonstrations.

If it all sounds like a lot of self-help guff, it’s not without a clear self-awareness. Witty, knowing and often downright surreal, it’s as much a satire of the kind of lifestyle evangelising it pretends to be as it is actually life-affirming. The weird, chaotic and disjointed nature of this play/lecture/presentation/story makes it constantly surprising – we never know quite what they’re going to throw at us next. On one level, the three characters’ evident instability and neuroses seem to undermine their message: Heron acts like someone on the verge of a nervous breakdown, suffering from a mix of PTSD and responsibility-induced stress; her brother Magpie is naive but curious, and often squirm-inducingly intense; and the youngest and most nearly-normal of them Feral Pigeon, is afraid of going out and doing anything fun lest she end up losing control of her bowels. On the other hand, their dysfunctionality makes our own problems pale in comparison.

How effective all this is in terms of making people feel less afraid and more okay about themselves is questionable, but it’s certainly an entertaining ride that keeps you guessing and giggling throughout. Plus we got to learn a new fun fact about otters.

Expect bags of fun then – quite literally, in fact. They’ll be waiting on your seat for you as you go in.