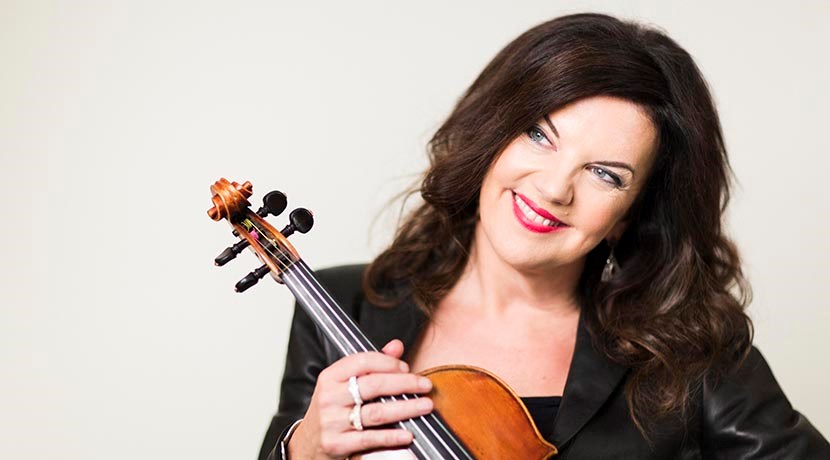 Tasmin Little, one of the world’s foremost violinists, is to be awarded an honorary degree from Birmingham City University.

Tasmin will be handed her Honorary Doctorate by the University’s Chancellor, Sir Lenny Henry on Monday 24 July in a ceremony at Symphony Hall alongside students graduating from the Faculty of Arts, Design and Media, which includes Birmingham Conservatoire.

In 2012, London-born Tasmin was appointed an Officer of the Order of the British Empire (OBE) in the Queen's Diamond Jubilee Birthday Honours List for services to music.

Speaking ahead of the ceremony, Tasmin Little said: “I’m thrilled and honoured to receive an Honorary Doctorate degree from Birmingham City University. I have so many wonderful associations with the city of Birmingham and the Midlands.

“I have played for many years with the CBSO for the marvellous audience at Symphony Hall, as well as at Birmingham Conservatoire and other concerts in the immediate vicinity, including my mother’s birthplace, Stratford-upon-Avon. I am looking forward to this exciting day hugely.”

An exclusive recording artist for Chandos, her Elgar Concerto disc was awarded the Critic’s Choice Award at the 2011 Classic BRIT Awards. Further awards include a ‘Gramophone’ Award for Audience Innovation for her musical outreach programme, ‘The Naked Violin’, and a ‘Diapason’ d’Or for her disc of Delius violin sonatas with Piers Lane.

Tasmin offered some words of advice to the Birmingham City University graduands she will address on Monday: “Graduation day is a real milestone for every young person – it is the accolade one cherishes after years of hard but rewarding study. There is a sense of completion but it is also the beginning of a hugely exciting time where one’s whole life is ahead and the possibilities are varied and enticing!

“To all those graduates, my piece of advice would be: do what you love most and do best! Do not be afraid to be different and to follow your own path. I congratulate every one of the graduates and wish them all the best in their careers!"

The musician first learned to read music at age six while learning to play a recorder that her mother had given her. After leaving school she went on to the Guildhall School of Music and Drama, where she obtained a Performance Diploma and won the Gold Medal in the School's annual music competition in 1986.