The winner of the Joan Sutherland Audience Prize at the 2021 BBC Cardiff Singer Of The World competition, Claire Barnett-Jones has one of the most sought-after voices in opera. A former student of the prestigious Royal Birmingham Conservatoire, Claire this month returns to the city-centre venue to perform songs from the 2022 BBC Proms alongside pianist Simon Lepper.

What’s On recently caught up with the mezzo-soprano to find out about her career journey to date, and what audiences can expect from her forthcoming concert.

What are your early memories of singing, Claire?
My journey wasn’t conventional for a classical singer. I can remember entering the school talent show without the knowledge of my parents at five years old, singing Frere Jacques and winning it, with the prize being a Sony Walkman, which was so very exciting at the time! I was part of school choirs and then sung in barbershop groups, but it was always primarily non-classical singing until I was 17.

Was there a turning point in your life when you knew you wanted to pursue a career as an opera singer?
My musical training was initially with a variety of instruments, but mainly the viola and saxophone. I led the viola section in the National Children’s Orchestra and was grade eight standard by the age of 13. I had always hoped a career in music would be possible, but due to a period of repetitive strain injury, I was told to stop playing instruments for a time, so started singing lessons at 17.

I progressed quickly. Within a year I’d decided to apply to music colleges on singing rather than as an instrumentalist, and got accepted into Royal Birmingham Conservatoire. Coming from state-school education, I didn’t see many people going to study at music college, so I was very naive as to what it would be like and the best ways of applying.

The turning point in terms of whether I could seriously pursue this career came when my partner (who I’m still with today) encouraged me to apply for postgraduate music college in London. I really didn’t think I was good enough to be accepted, but in the end I was offered places at all the London colleges with scholarships. As with many artists, there’s a fine line between self-confidence and self-doubt, and as artists we probably need a bit of both to keep us balanced.

With two years of (pandemic-enforced) cancellations, having to try to survive on universal credit and very little financial support, it really did make me question whether there would be a place for me, or viability in this industry to come back to. I’m not from financial privilege and have never had a family safety-net since leaving home. I can completely understand the choices fellow artists have had to make since the pandemic, and was very close to making that decision too, due to financial restraints. I’m incredibly lucky that doors have opened for me, particularly since Cardiff (Singer Of The World competition 2021), and am very much looking forward to the next steps and opportunities in this career. 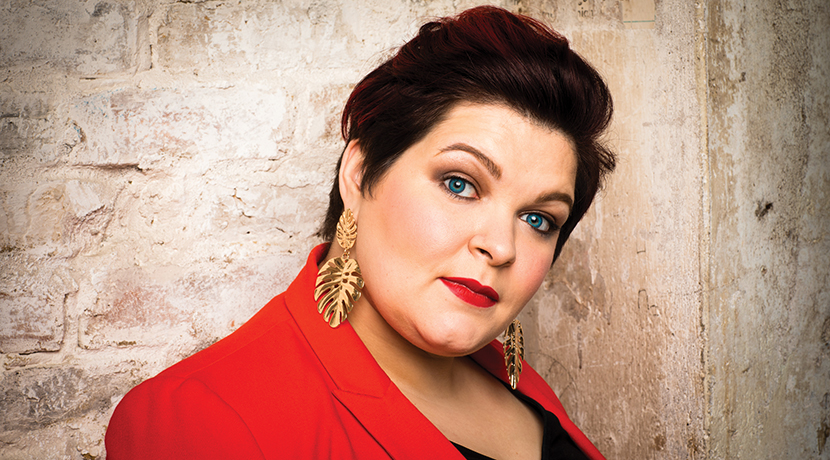 What have been your career highlights to date?
In 2012 I was a soloist in the Welt Parliament section of Mittwoch aus Licht by Stockhausen, directed by the late, great Graham Vick. This was part of the Cultural Olympiad. It brought together so many areas of the arts and really showed what could be done in very unconventional space and in different ways, from a live helicopter quartet to real-life camels...

Being part of the BBC Last Night Of The Proms in 2016 was extremely special. Sixteen young soloists were chosen to sing Vaughan Williams’ Serenade To Music. The atmosphere in the Royal Albert Hall on that final night was like nothing I had felt before...

Being called on within 24 hours to compete at BBC Cardiff Singer Of The World 2021 is still a whirlwind memory, and then to be a finalist and prize winner, an absolute dream come true.

I’m currently working with one of my all-time mezzo idols, Brigitte Fassbaender, whilst she directs me as Fricka in Die Walküre at the Tiroler Festspiele in Austria. Throughout my career she has been my ‘go to’ person to listen to; her recordings would be the best place to start for lieder and opera. I’ve already learned so much from her and know this will continue to be one of my career highlights in the future.

Tell us a little about your time at Royal Birmingham Conservatoire (RBC)...
I was fortunate in my time there to be given a lot of performing opportunities, partly because of the kind of mezzo I was. At 18, I was in my first opera as chorus in Die Zauberflöte, and from then on I was in at least one opera every year, as well as staged scenes, choral singing, recitals and masterclasses. A lot has changed in 10 years at RBC - not just the new building - and I’ve heard some fantastic things, particularly the way Paul Wingfield is now running the vocal department. I’m very much looking forward to singing for the first time in the new Bradshaw Hall.

You’ve said you pick programmes that you really love - what’s your relationship with the pieces you’ve selected for this concert?
When the BBC Proms asked me to create a recital programme, I was so thrilled and really wanted to make sure the items selected linked with the composers the Proms were highlighting. I also wanted to make sure there was at least some kind of gender equality, as well as a programme which was interesting for an audience.

Two of the pieces (Joseph Horowitz and Rebecca Clarke) were introduced to me by the wonderful Sarah Walker, who taught me whilst I was at Royal Academy of Music. Both pieces are full of drama and storytelling, and I really love the way the composers have set the texts...Whilst researching the Society of Women Musicians (for a different recital, originally planned for the Aldeburgh Festival), I really felt connected with the music and life of Ethel Smyth - her symphonic works and operas, as well as these relatively unknown five Lieder...

Concluding the recital is a world premiere by Errollyn Wallen, who I first worked with very briefly on a project a few years ago. I was so thrilled when she agreed to write a work for me, and very excited to perform it.

You’ve also said that you’d like to be a voice for younger musicians climbing the early-career ladder. What help do you feel is needed?
I worked three jobs whilst studying for my Masters and opera school, and even though these are already highly competitive places to get into, the real struggle comes when you leave them. If you manage to negotiate a training environment or music college financially, then that is fantastic, but in doing so you probably exhausted a lot of trusts and funding streams. When I was in my final year of opera school, I saw my fellow year group applying to multiple young opera studio programmes in Europe and the US -  something I couldn’t afford to do. Before even being accepted for an audition, you have to make decent video recordings, which cost on average £250, including pianist cost. Venue costs can be on top of that. If you are then accepted for an audition, each can cost around £400 a time for flight and overnight stay. The expenses mount up, but at the time I couldn’t find any funding source to help with these costs, so there was already a barrier to applying and a lack of equity for all. An acceptance into an opera studio can really give you a step up in your career and lots of experience on stage, as well as a conservative but steady income stream. And with the added complexities of Brexit, being based in mainland Europe for a young artist gives so many more opportunities.

Ideally, I would love to see more means-based funding for emerging artists for after-music-college training, and also support for those whose voice types may take a different path, such as more dramatic voices. Also, more mentoring of young musicians by artists who are the next generation up, who know what the industry is like right now. So much at the moment is about creating your own opportunities, but also being supportive of each other as we swim through the marshes of the arts industry.