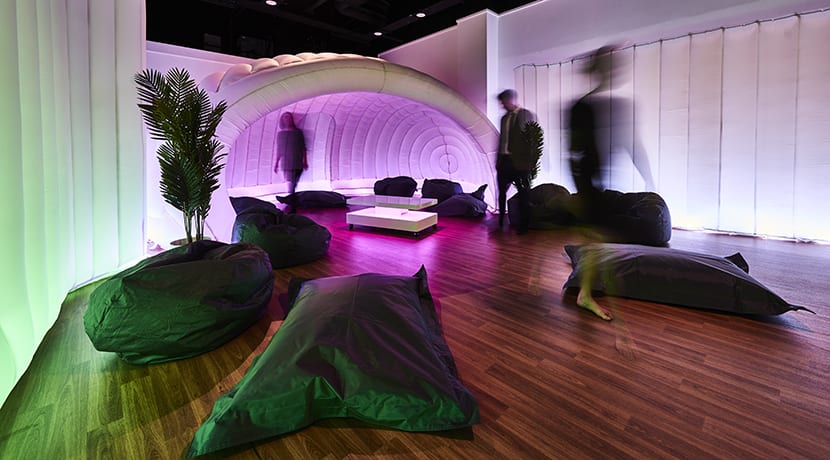 Resorts World has created a dedicated space for everyone at the destination to reflect and relax away from everyday life, named the Zen Zone.

Relaunching on 21st September, the space will be open daily between 11am-6pm for all to enjoy as a space for calm. In partnership with local yoga guru, The Gentle Rebel, the Zen Zone will also be host to weekly yoga classes and weekly morning meditation classes, designed to decrease stress, anxiety and increase productivity throughout the working day. The space is also available for private hire by local groups or businesses looking for a space for wellbeing activities.

The space was originally designed as a pop-up during Mental Health Awareness Week back in May, when it was overwhelmingly well received. Not only was it seen as a great space to go and relax, honest written feedback found it had made a difference and had a genuinely positive impact on those with conditions such as anxiety and autism.

Resorts World’s latest creation comes amidst growing statistics warning of the rise in poor mental health. According to 2019’s Global Wellness Summit Report, “globally, one in six people now has at least one mental or substance abuse disorder (over 1.1 billion people)—with anxiety disorder ranking #1” and “in the UK, 67 percent of people report that they’re more stressed than they were five years ago.”

The call for meditation around the working day also follows the growing boom in the practice to counter everyday stress and anxiety, as well as boosting workplace productivity.

“Around £1.7 billion is currently lost in output and productivity by employees in our region as a direct result of poor workplace wellbeing,” according to the West Midlands Combined Authority’s recent Thrive at Work Wellbeing Survey.

Abida Osmani, founder of Inhere, a drop-in wellness studio for London’s commuters, says that “businesspeople often come to meditation not just to relax but to enhance their cognitive ability… it starts from a productivity slant – people talk about being able to focus and concentrate more” [inews, 2017].

“Resorts World’s key mission is for our spaces and experiences to create awesome lasting impressions. The initial impact of the Zen Zone during its May pop-up blew us away. Its return secures a space for everyone at Resorts World to enjoy a space for calm during their leisure time or their everyday working environment.”