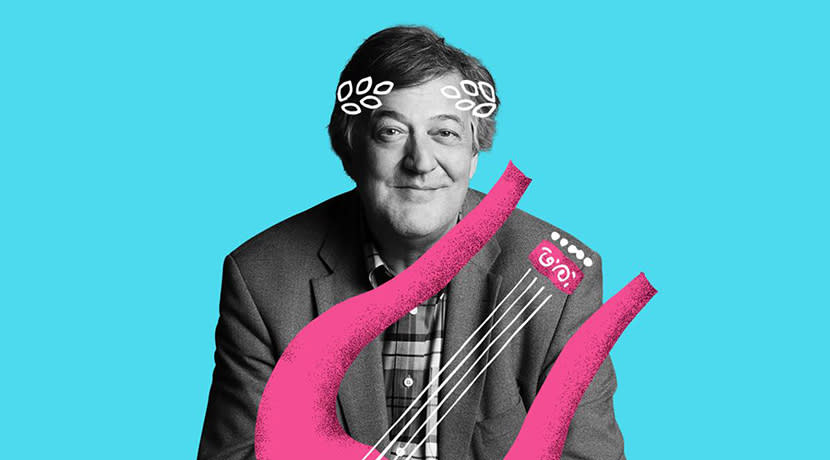 Stephen Fry - one of the world’s greatest storytellers - will embark on his first UK tour for nearly 40 years this summer in Mythos: A Trilogy – Gods. Heroes. Men.

Opening at the Edinburgh International Festival on 19 August, this trilogy of plays will see one of the country’s most loved national treasures telling some of the world’s greatest stories about Greek Gods, Heroes and Men whose gripping tales still echo today. The tour continues across the UK until 23 September in Gateshead.

Mythos – Greek for "story” – is split into three separate shows and is loosely scripted, giving the audience a chance to hear Stephen’s signature wit and humour in action. With his vast knowledge of Greek mythology, Stephen has too many stories even for three shows, so his audience will help choose which tales to tell – making Mythos a different show every time. While the three Mythos productions each stand alone, they also constitute a sequence so that those who attend all three will follow a wonderfully satisfying story. Laugh-out loud funny, mind-blowing and often personal, Mythos is a once-in-a-lifetime experience.

Stephen Fry says: “I am shivering and quivering with excitement at the thought of a UK tour, taking the astounding stories and characters from Greek myth around the UK. Three different shows over three different nights: people can come to one, two or three evenings, but whichever they choose I hope will be as exciting for the them as I know it will be for me.”

Directed by Tim Carroll, the UK tour follows the world premiere of Mythos at the Shaw Festival, Ontario in 2018. At the festival Mythos received a wealth of glowing reviews from critics and audiences alike, with Toronto Star marvelling ‘What most impressed me was Fry's capacity to keep his audience enthralled as he tells stories within stories within stories’.

‘Gods’ charts the creation of the Cosmos and the primordial deities; the splendidly bloody interbreeding and family feuding that led to the rise of the Olympians – Zeus, Hera, Apollo, Athena, Hermes and the rest; and the creation of Humankind.

‘Heroes’ chronicles the feats, quests, love affairs, betrayals and triumphs of the Great Heroes. Perseus, Theseus and Heracles (to name but three) strive against the odds – and sometimes the gods – to rid the world of the mythical beasts and monsters.

‘Men’ tells the tale of the founding of Troy, the abduction of Helen and the gathering of the last great generation of Greek heroes to rescue her – Agamemnon, Menelaus, Achilles and Odysseus. The Trojan War and Odysseus’ epic journey bring to an end the age when the Olympians still moved among Humankind.

A semi-circle of screens designed by Doug Paraschuk surrounds an ordinary-looking wingback chair (which may not be so ordinary), setting the scene for Mythos. Dynamically designed projections by Nick Bottomley support the storytelling by featuring classic images with a humorous twist. The atmosphere is completed by Kevin Lamotte’s lighting design, along with original and found music by Paul Sportelli.

Tickets go on sale at 9am on Friday 3 May here