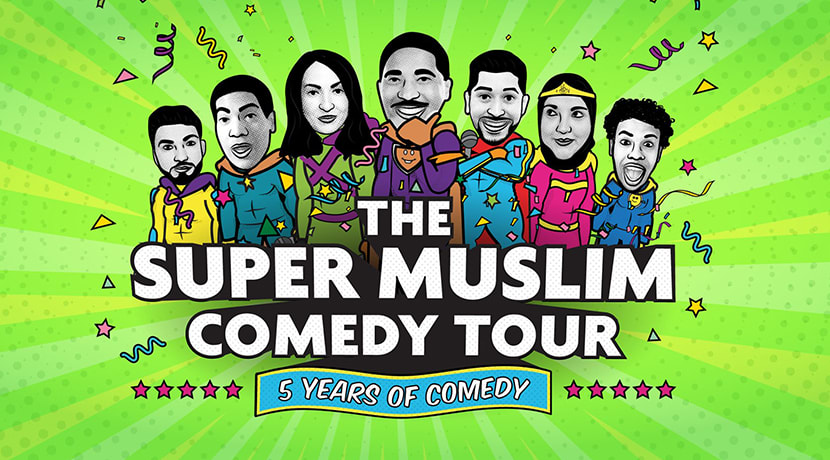 Super Muslim Comedy Tour which celebrates the comedic powers of superheroes and their side-splitting performances. This year sees Esther Manito, Abdullah Afzal, Azeem Muhammad, Fatiha El-Ghorri, Kae Kurd and Omar Hamdi take the stage around 11 cities in the UK, from 6th to the 17th of November - you can catch them at The Elgar Concert Hall, Birmingham, Friday 15 November.​

The tour is now in its 5th year and organised by Penny Appeal, an international humanitarian charity who works in over 30 countries worldwide. This year’s tour proceeds are going to the Forgotten Children campaign which aims to get children in Senegal off the streets and into a safe environment by providing adequate access to healthcare, food and a better education.

The line-up of comedy styles and unique voices is guaranteed to bring laughter all night, ranging from Esther’s comical yet consequential approach towards the female identity to Omar’s observation on British multiculturism and what it means to be a comedian in an Arab community. The charity has brought seven world class comedians and each evening will consist of a range of them.

Flying in from the states, Azeem knows how to get a crowd going. He uses comedy as a way of sharing his experience as a Muslim man in America and opening up about his conversion to Islam. Underneath Londoner Fatiha’s colourful hijab,  is a mind full of cutting observations and engaging witticism of the life and times of a British Muslim woman – smashing stereotypes in heroic fashion! Both stand-up stars will be part of the line-up for all nationwide shows.

When asked about why the event is so important, Fatiha said, “Being a stand-up comedian is really difficult as a Muslim woman so it’s nice to have inclusive events like this where everyone is welcome to come along and have a good laugh”.