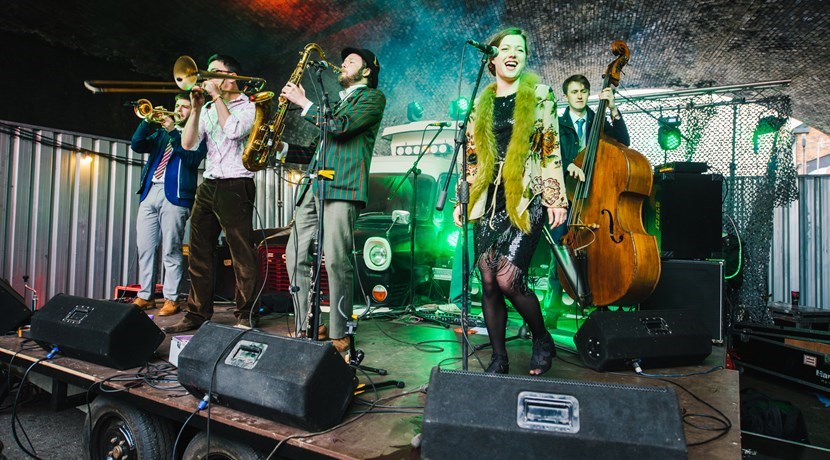 It seems no time at all since 2016’s action-packed event, but Birmingham’s only “vintage remix” electro swing festival is already back for the May Bank Holiday weekend, and this year it’s even bigger and better than before. Here’s our blog & verdict on one of the best days out in Brum. 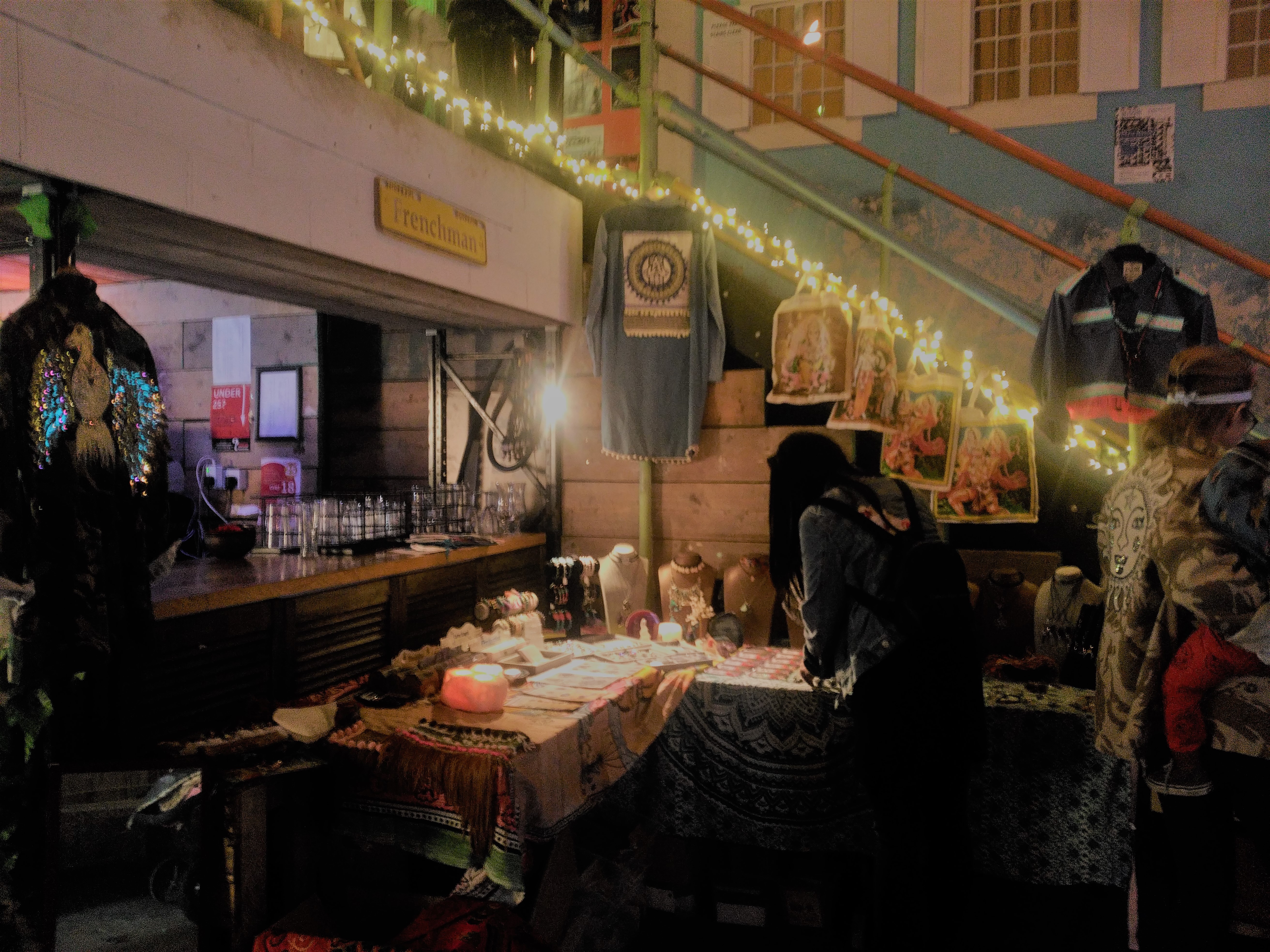 The fun begins at 2pm, with Good Co. getting things started on the Main Stage. This year’s Swingamajig features an expanded Vintage Market just outside the festival gates, meaning that, for the first time, you don’t need a show ticket to take advantage of the chance to grab yourself some vintage swag (though you’d definitely be missing out). It seemed like the obvious place to start, so we took a look around. Safe to say, bargain hunters won’t be disappointed! 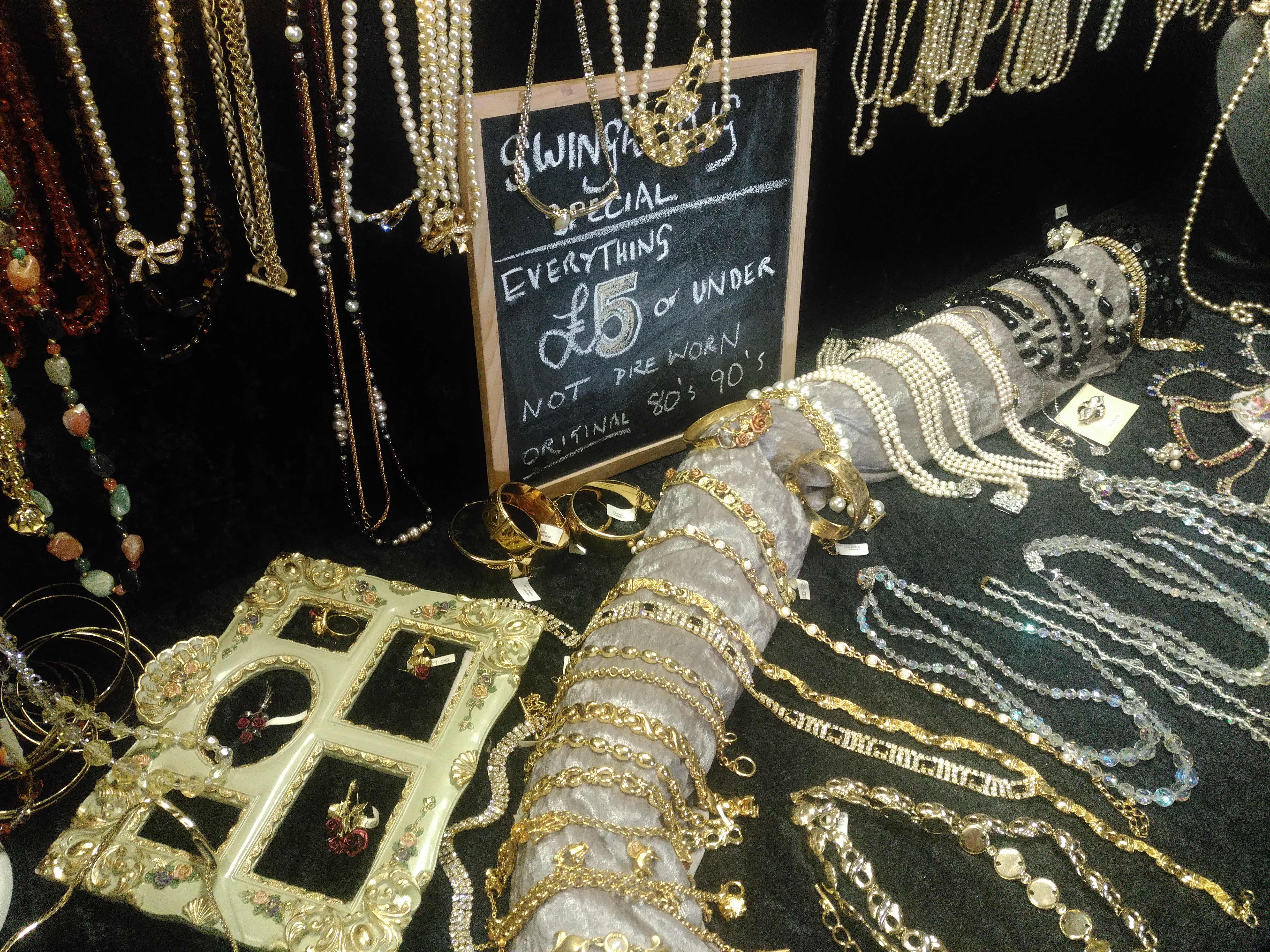 Once we’re in, there’s just time to catch Good Co. wrapping up their set before heading over to the all-new Cave of Curiosities for local favourites Rhino & the Ranters.

If you’re expecting to while away a sleepy Sunday here, then you’re definitely in the wrong place. There’s nothing quite like Rhino & the Ranters’ cacophonous cowpunk for shaking off the summer afternoon lethargy.

Over the last few years, the Birmingham band have been building up a reputation for their blistering live gigs, and as early as they might be on the bill, their Swingamajiig set is no exception, blasting out one belter after another with furious riffs, plenty of audience participation and of course, an appearance from their regular collaborators, the Skylarks Choir. If numbers like “What’s Cooking Mama” and “Guajira” don’t wake you up and get you bouncing along, nothing will. 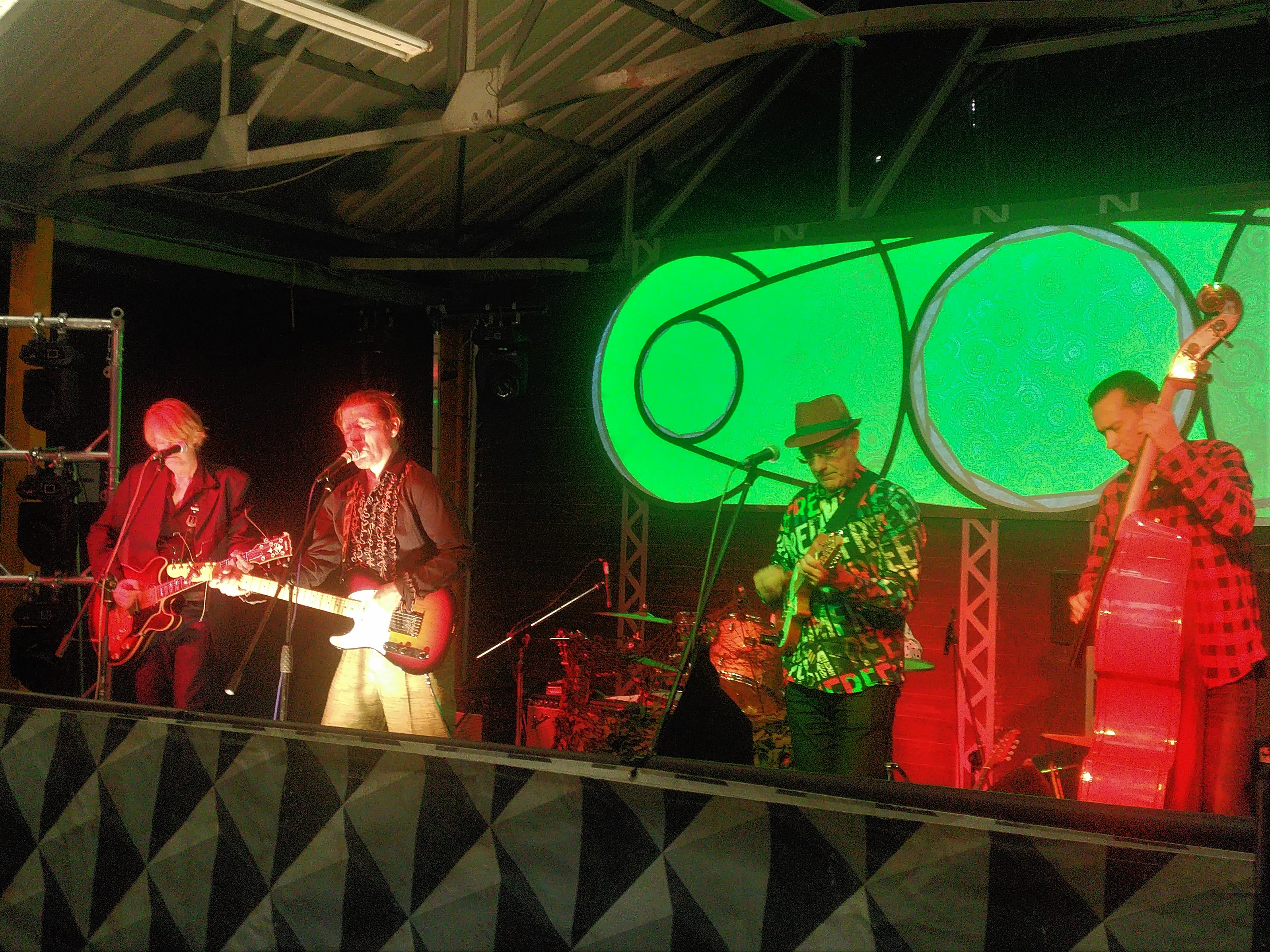 The Cave of Curiosities itself is a big improvement on the outdoor Arch Stage of previous years, with a wider stage and surrounding area providing plenty of room to spread out and dance along without getting in the way of passers-by and food queues, as well as making it easier for everyone to get a glimpse of the action. It also contributes towards the atmosphere, the darker setting creating the perfect environment for the heavier, more rock-based sounds that this stage hosts. As an added bonus it circumvents concerns about the weather, though happily, on this particular occasion, it’s never a concern.

Exhilarating live favourite “Guajira” is followed by the call-and-response style “Hallelujah” as an encore, which sees frontman Ryan Webb get down off the stage to dance with the audience. 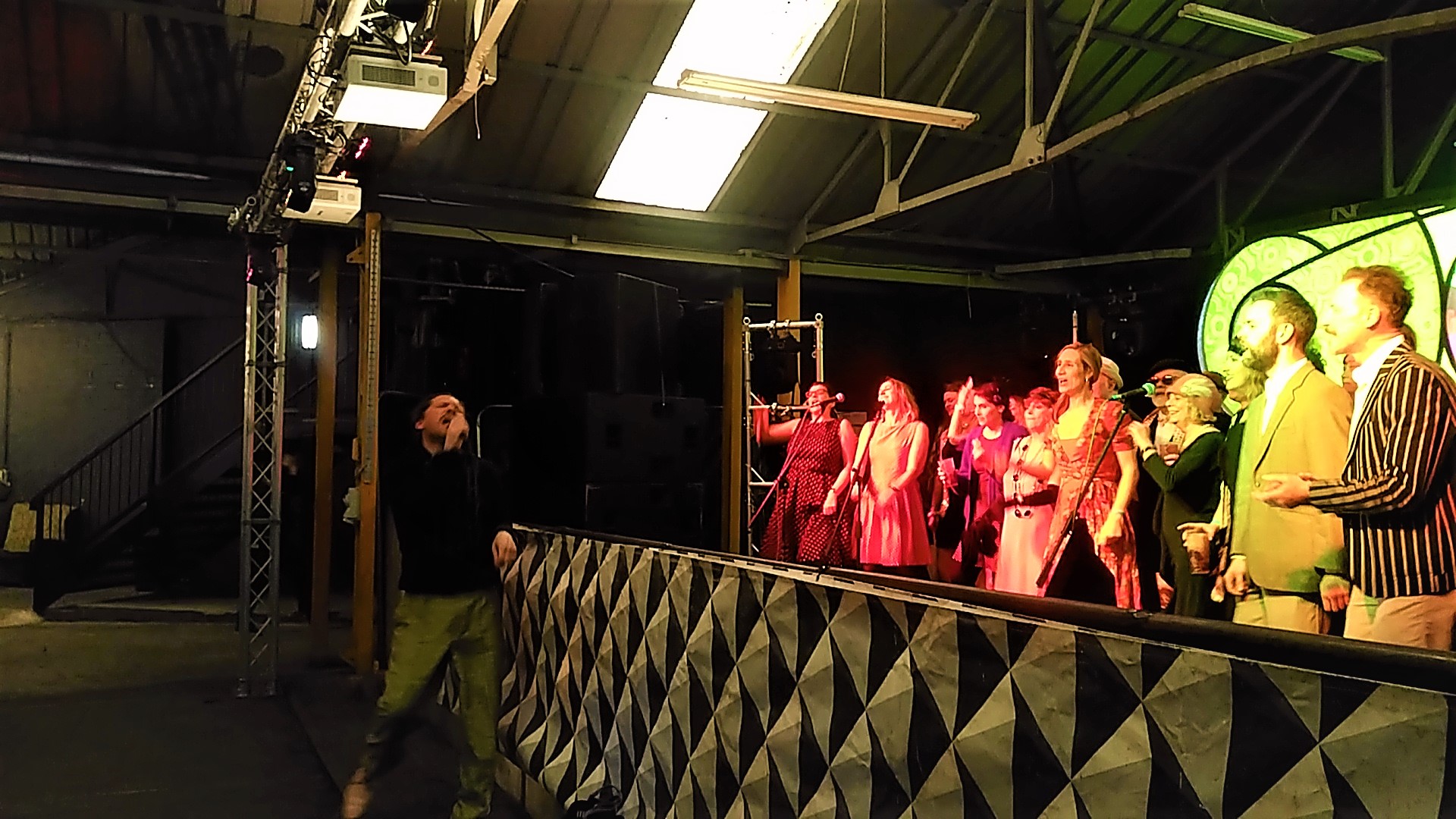 After the Ranters’ raucous brand of rock ‘n’ roll, it’s back to the Main Stage for something a more classy and traditional from Lola Lamour and her Bluelight Boys. This glamorous, sweet-voiced singer is the archetypal vintage swing throwback, looking and sounding every inch the part as she performs covers of classics from across the decades.

We’re there in time to hear her rendition of Duke Ellington’s and Juan Tizol’s seductive 1936 hit “Caravan”, as well as a lively, upbeat take on 1949’s “Enjoy Yourself”. 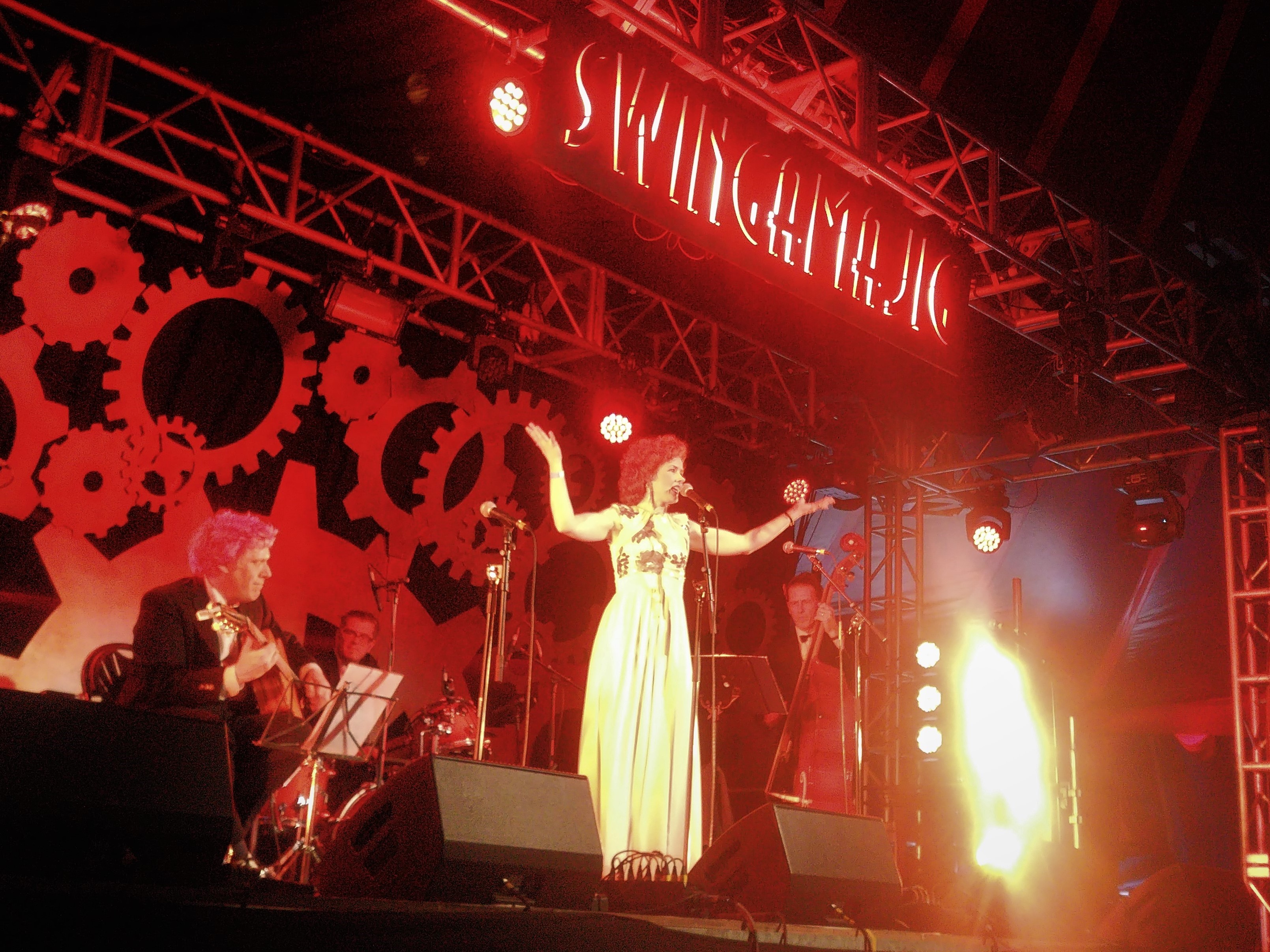 Both the Cave of Curiosities and the external market are part of a wider rethink this year that’s a definite improvement. While Swingamajig has always been beautifully designed, feeling very much like a self-contained mini vintage Wonderland, this year’s layout is more straightforward and intuitive. The entrance/exit is easier to find, with the loos located right beside it, and upon leaving the Main Stage, you’ll now find yourself directly opposite the way into the Cave of Curiosities, with CircusMASH showcases and City of Colours graffiti art taking place just in between. 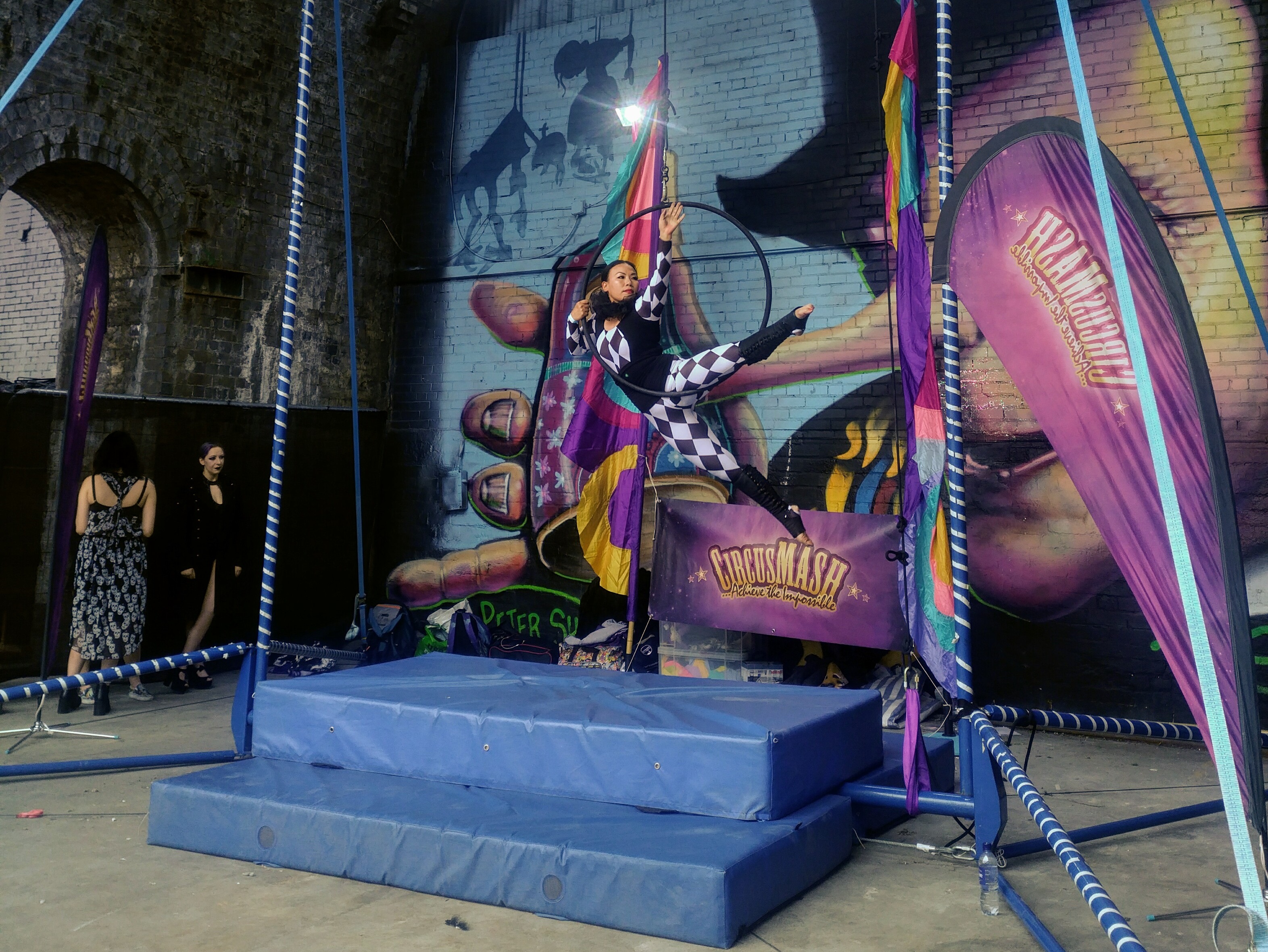 Access to the Cabaret Stage and the beautifully decked-out Vintage Terrace is just around the corner, while the food court is now tucked away from the music and performances, creating a welcome chill out space for when you need to give those weary feet a rest from dancing.

King Brasstards bring the Mardi Gras spirit to the Cave of Curiosities next, with a mix of joyous New Orleans-style jazz, ska and funky grooves, before slowing things down with a swinging take on “Over the Rainbow”, complete with cool sax solo. A Jungle Book double-bill with “The Bear Necessities” followed by “I Wanna Be Like You” goes down a storm. 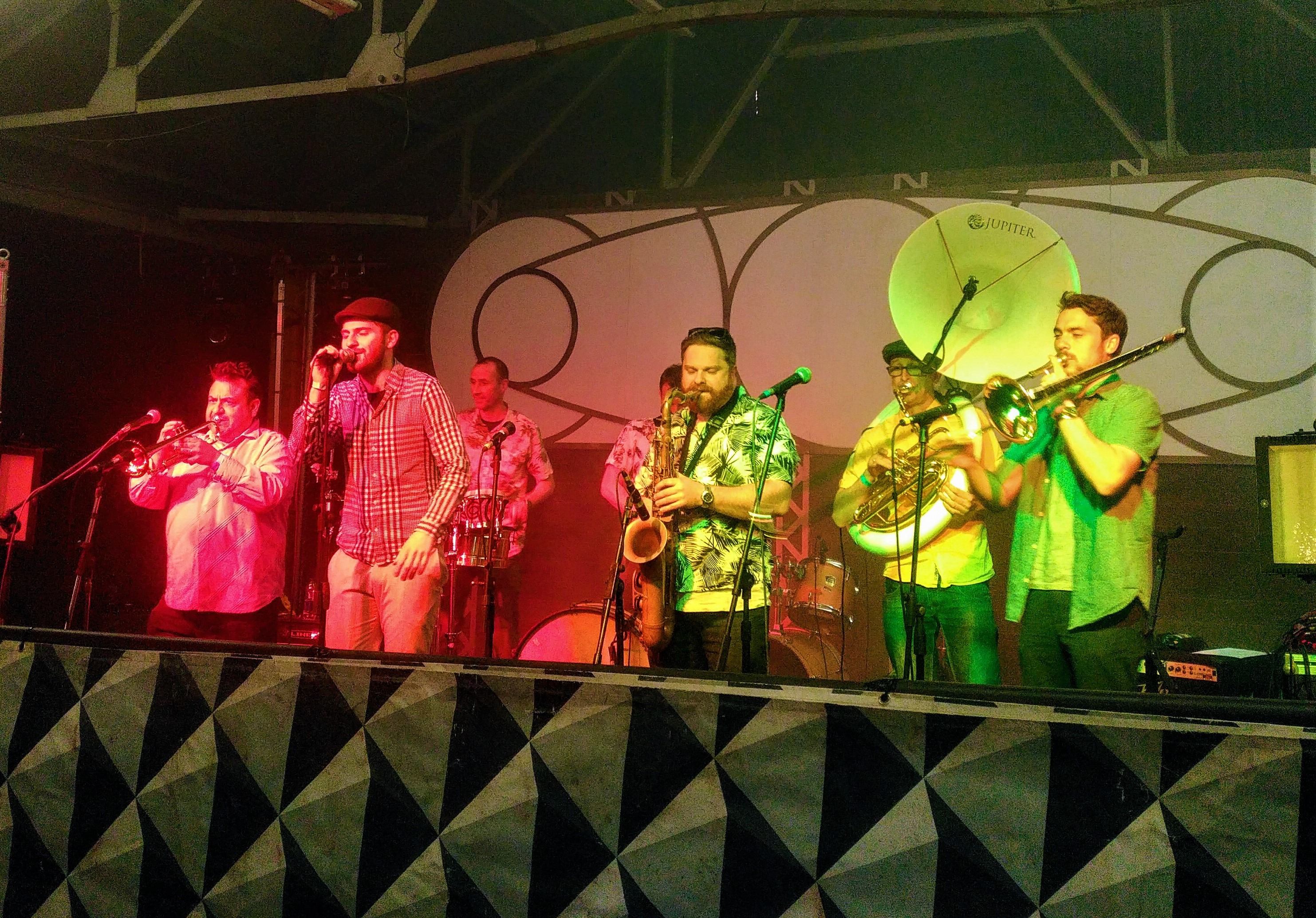 Meanwhile, on the Main Stage, Elle and the Pocket Belles remix familiar favourites in a fusion of vintage swing, electronic pop, rock, rap and drum ‘n’ bass, with some help from MC Gambit Ace. Modern hits “Walk This Way”, “House of the Rising Sun” and Justin Bieber’s “Sorry” all get the treatment, alongside original numbers like “We’ve Really Got the Love” and “Get Down Tonight” (which has the whole audience down on the ground), and a handful of Andrews Sisters-inspired classics like “Boogie Woogie Bugle Boy”, “Rum and Coca Cola” and “Bei Mir Bist Du Schoen”. 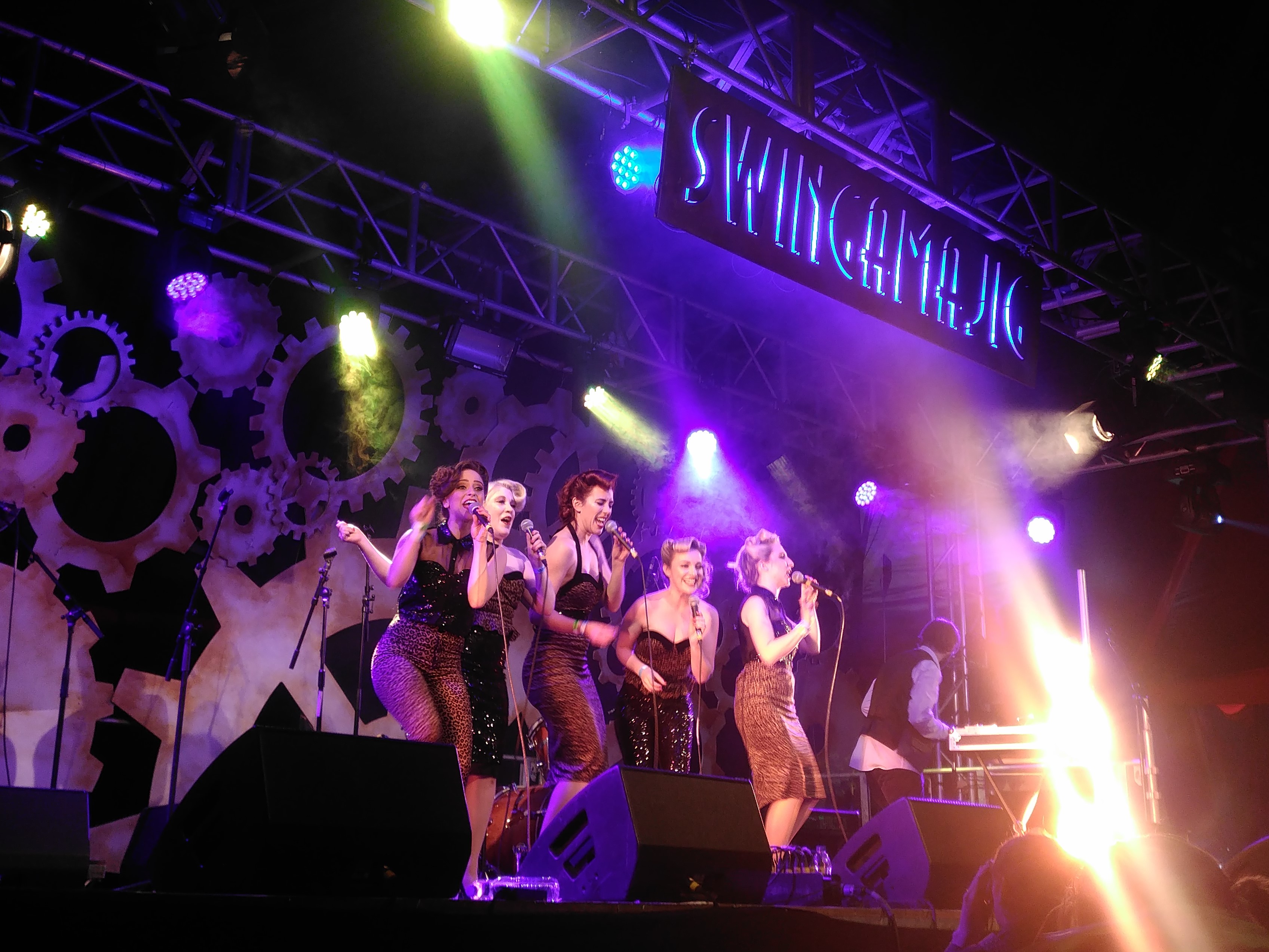 Aptly named rising local talent Punch the Sky make a big impression in the Cave of Curiosities, with a dizzying concoction of rock, klezmer, Scottish folk, jazz and disco, with a bit of Star Wars music (the Mos Eisley Cantina theme) thrown in for good measure. Their is a unique, distinctive and thrillingly energetic sound, winning the support of Electric Swing Circus’ Tom Hyland as well as the enthusiasm of the Swingamajig crowd (some of its members later join ESC on stage as part of their all new Grand Band). A top find of the festival and definitely ones to watch. Luckily, Birmingham-dwellers will have the chance to see them again very soon when they launch their new album at The Hare and Hounds on Thursday 18 May, performing alongside The Rin Tins and Heavy Beat.

After all that dancing, it’s definitely time to grab a bite to eat – gyros from Castaway Kitchen it is, then!

While Captain Flatcap presents his unlikely combination of folky flute and dirty bass in the Cave, Main Stage audiences get moving with an interactive dance show from Drum n Bounce, followed by a toe-tapping, brass-heavy funk and ska set from Smerin’s Anti Social Club.

Round the corner, the Can-Can Grand Finale brings the cabaret programme to a close, and the stage is part-dismantled to make way for crowds flocking over for the evening music acts. With chart-toppers Sam and the Womp leading the line-up on the Ragtime Records stage, it’s unsurprising that the room starts filling fast, although the turnaround takes a little longer than anticipated. 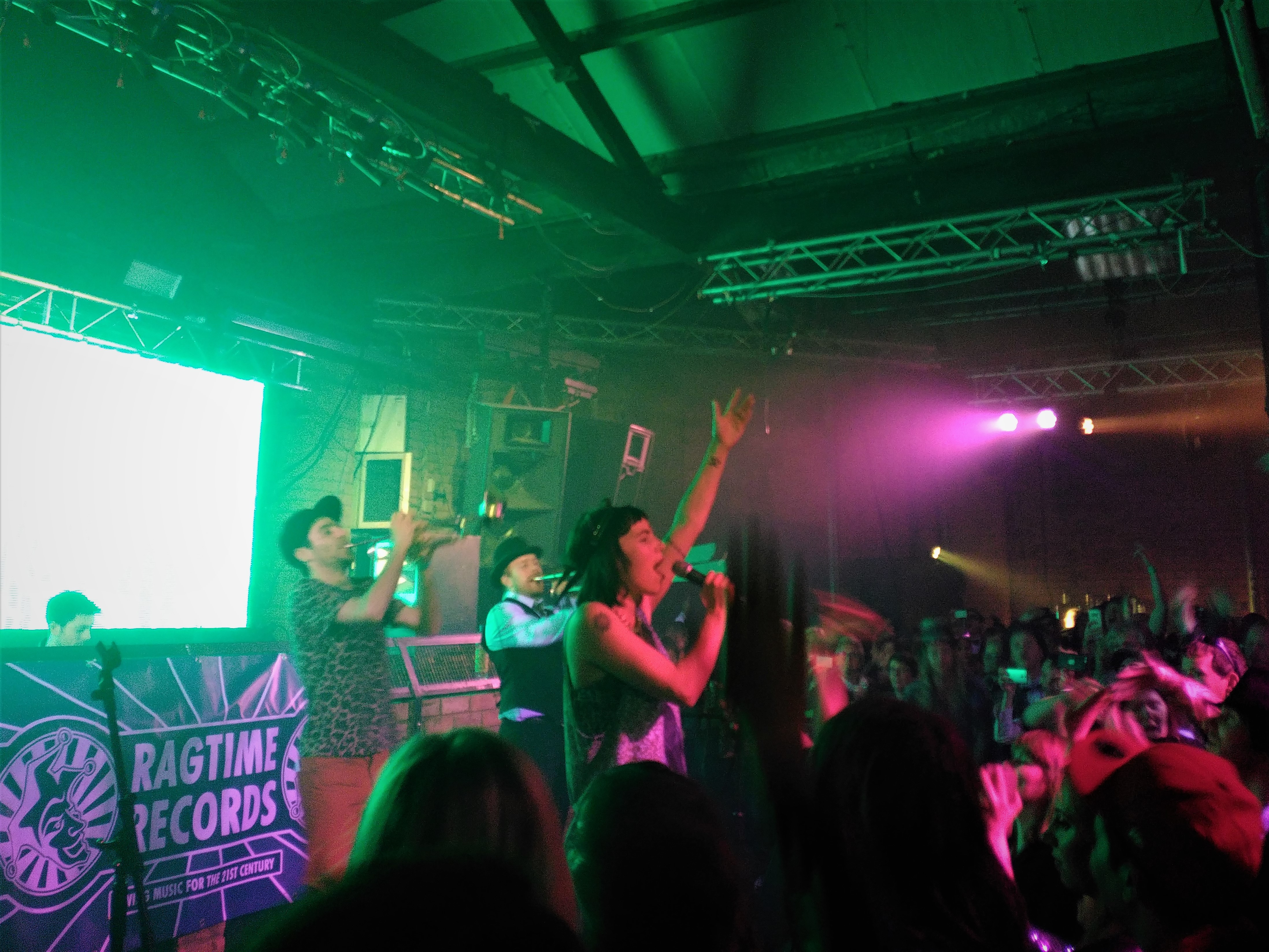 It’s worth the wait, though: from the giddy, off-the-wall lyrics and ska sound of “Zeppelin” to the upbeat pop of “Fireflies”, and from the fast-paced rhythm of “East Meets West” and the drum ‘n’ bass rollercoaster ride of “Ravo” to the laid-back, sun-soaked reggae of “Ice Cream Man”, the theatrical duo serve up one of the festival’s most fun-filled sets. 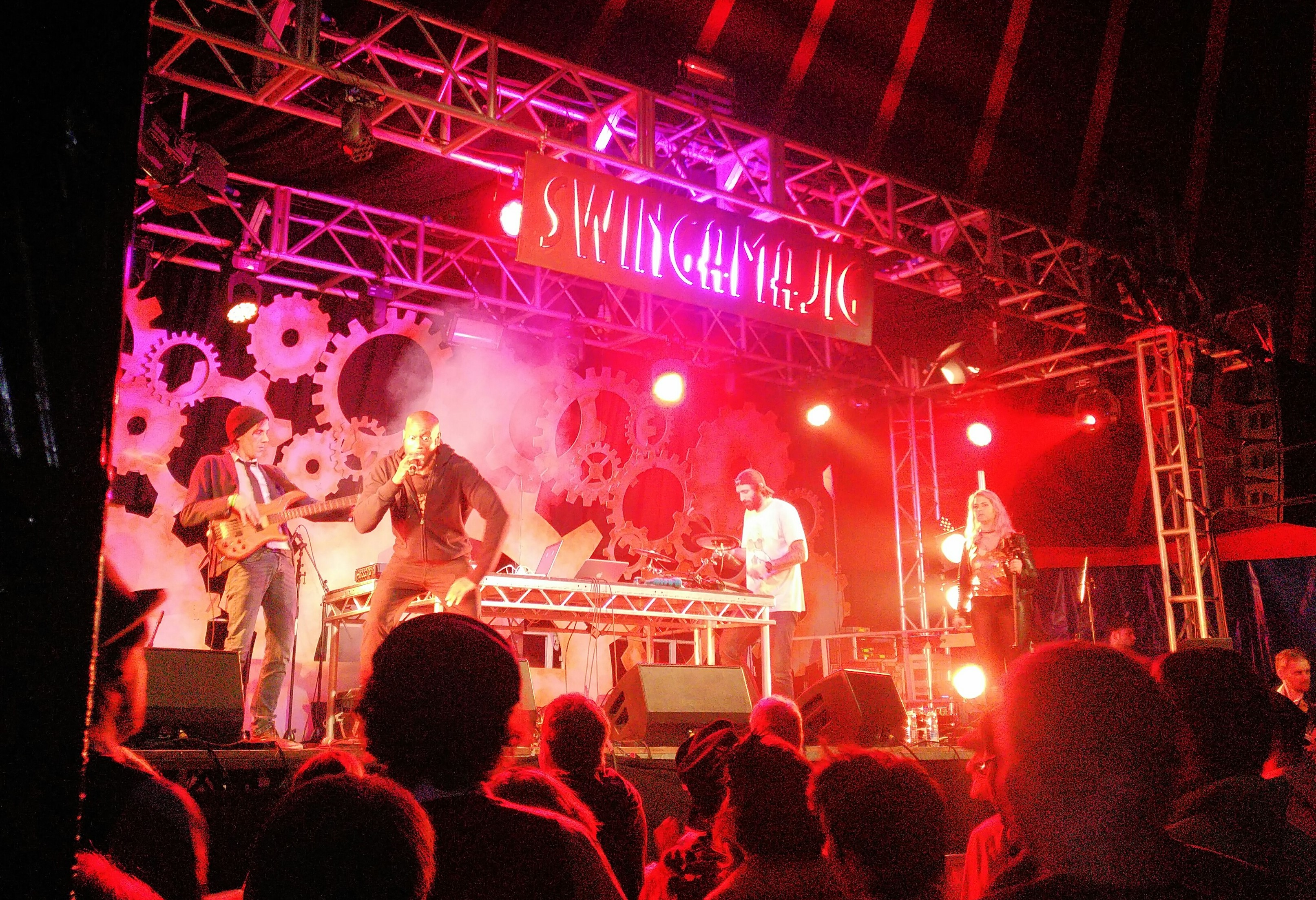 Back on the Main Stage, Smokey Joe and the Kid take the tempo down a little with heavy, electronic bass and grooves. MC and rapper MysDiggi later livens up their set, building up to a massive medley of hip hop hits.

Elsewhere, in contrast to the crazy antics of the likes of Sam and the Womp, Birmingham ska group The Cracked Actors bring some real fire to the Cave of Curiosities with a raw, gritty ska-punk set packed with politically charged songs true to the genre’s origins. Highlights include a rousing (and sadly rather relevant) anti-racism number - “BNP/UK-I-P – What does it stand for? It doesn’t stand for me.” 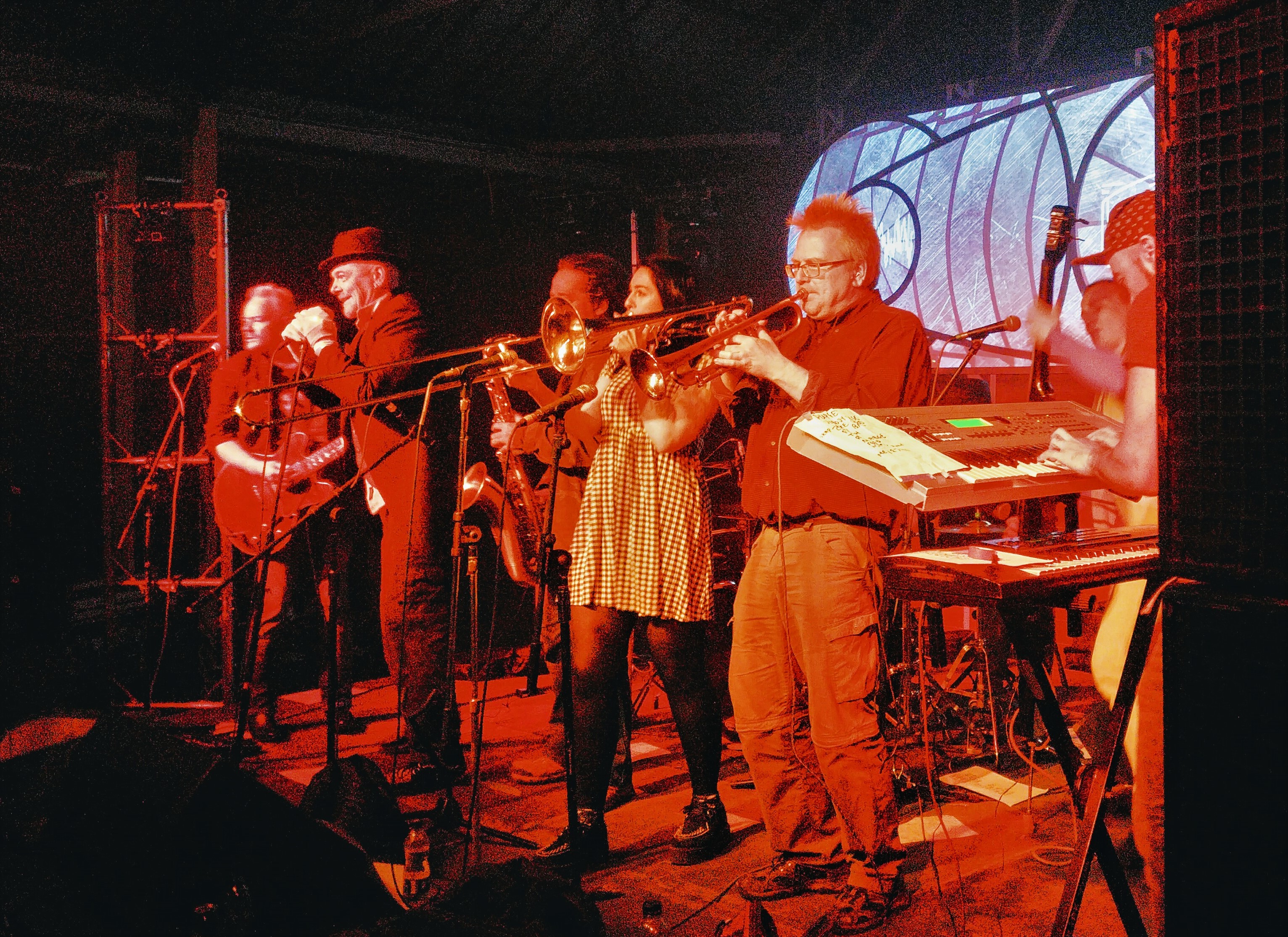 Just before it’s time to catch the last train home, festival founders Electric Swing Circus make their eagerly anticipated outing on the Swingamajig Main Stage, with an extended line-up forming their brand new Grand Band for an even bigger sound – the perfect high to end the day on. The local legends and leading electro swing outfit have now been running the festival (alongside their very own Ragtime Records label) for four years, and if anyone knows how to throw a proper party, it’s these guys.

Paying tribute to the support of their ever-growing number of loyal fans, the group dedicate a warmly received number to their followers, named after the festival itself. “Swingamajig” is an irresistible summer holiday anthem, all warm weather, martinis, dancing in the street and swimming at the seaside.

There’s also a nod to their now six-year history as a band, with a rendition of their very first track, “The Penniless Optimist”. A fitting description of the early days, perhaps, but if this year’s fabulous event is proof of anything, it’s just how far that optimism (along with unflagging commitment and hard work) can take you. What started as something of a niche cult phenomenon is now a firm fixture in Birmingham’s cultural calendar with a wide, popular appeal, and undoubtedly one of the most enjoyable and original events the city has to offer. A triumph – again.