The Crows Plucked Your Sinews review 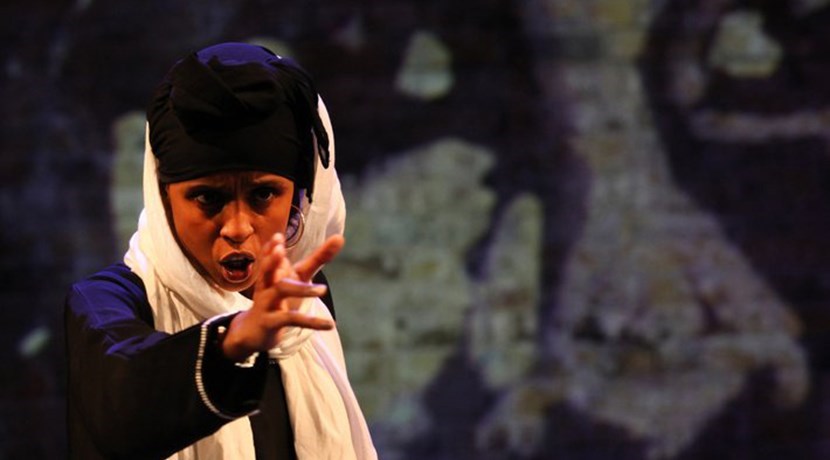 The unsettling title of Hassan Mahamdallie's one-woman play is taken from a famous poem by the Somali national poet, Sayid Maxamed Cabdule Xasan (Mohammed Abdulle Hassan). Known to the British as the “Mad Mullah”, Xasan was also a prominent military leader, fighting many successful campaigns against imperial occupiers. “Koofil”, the poem of the title, describes the defeat and death of Commander Richard Corfield at the Battle of Du Madoba in 1913. What makes the play's angle on the story so unique, however, is its focus on a female dervish fighter – not unusual in reality, but little talked-of today.

The Crows Plucked Your Sinews follows two stories: one of a young, British-Somali woman in 21st century Woolwich, and the other of her dervish great-grandmother. In 2011, our young protagonist watches reports on the death of Osama Bin Laden, and hears of how her drug-dealing brother has got himself into trouble with both the police and a rival Somali clan. In between, she bonds with her ageing, dementia-suffering grandmother, who opens up the family's rich history to her.

In 1913, another young woman, recruited to Xasan's nationalist cause, kills an English boy called Tommy – this is Thomas Lister, who volunteered to fight the “Mad Mullah”, and whose real letters to his family are now preserved in Yorkshire Archaeological Society archives. Later, she is involved in the battle that will see “Koofil” defeated.

Both characters are powerfully performed by Yusra Warsama, a performance poet, actor and writer for whom the play was written. Warsama has tremendous presence, switching effortlessly between the two parts and conveying a real sense of their yearning and frustration, with a storytelling style that draws listeners in close. Abdelkader Saadoun joins her on stage, providing an energetic and evocative live oud soundtrack.

This is a play with a fascinating story to unfold, and one the audience evidently appreciated having revealed to them. As Warsama said herself in a post-show Q&A, there's an urgent need for more stories of this kind – this play should be one voice amongst many, instead of an exception, and in that, The Crows Plucked Your Sinews feels like the beginning of something important.

Nevertheless, structurally the show could use some polish. The pairing of the two storylines is a strong idea, and both characters are compelling, but the two never quite mesh together fully. In the end, it's unclear what our modern-day protagonist has really gained from her grandmother's story beyond a chance to pass it on, and the few parallels drawn between her life and her great-grandmother's need more development to be really convincing. Ultimately, both plots close a little anti-climactically. If the purpose of presenting a female Dervish fighter from the early 20th century is partly to challenge our perceptions of women's roles in other times and cultures, then the passivity of her 21st century great-granddaughter in the face of events unfolding around her feels jarring. Early on, there's the faintest hint of potential radicalisation as she watches television, but this is never really dealt with afterwards. It would have been nice to see more of a journey for the character, where she learns to channel her anger into some kind of positive action.