The Duchess of Cambridge visits Thinktank to launch landmark survey 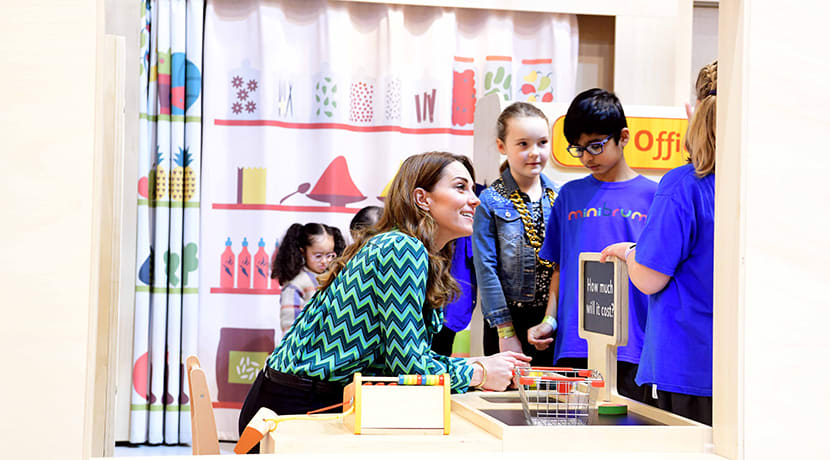 The Duchess of Cambridge visited MiniBrum at Thinktank, Birmingham Science Museum, on Tuesday 21 January to launch a new landmark UK-wide survey which aims to spark the biggest ever conversation on early childhood.

The visit saw Her Royal Highness launch the ‘5 big questions on the under 5s’ survey at the interactive mini-city gallery at the museum in Birmingham, as the first stop on a 24-hour tour of the country. The survey gives people across the UK an opportunity to provide their views on raising the next generation.

Her Royal Highness was shown around MiniBrum by children from Henley Montessori School Henley-in-Arden, who curated their very own ‘Mini Museum’ within the gallery and talked The Duchess through how their ideas had come to life. They were led by members of the Birmingham Museums team, including Toby Watley, Direction of Collections and Francesca De Rosa, Learning and Engagement Officer. Young children from St. Paul’s Nursery in Balsall Heath also joined the visit, along with 8-year-old Poppy Jordan, who is ‘Mini Mayor of MiniBrum’, and presented The Duchess with flowers.

Thinktank, Birmingham Science Museum was delighted to take part in the launch following its work focusing on early years education. MiniBrum opened in May 2019 as part of a major project to provide an interactive space for children under 8 at the museum. The space was designed with the help of children and families. Through play, the city introduces young children to real-life scenarios where they can test their ideas and problem solve from an early age giving them confidence as learners through fun and play.

As part of the visit to the gallery Her Royal Highness spoke to parents and carers about the survey.

The ‘5 big questions on the under 5s’ survey contains five short questions and aims to spark a national conversation on the early years that will ultimately help bring about positive, lasting change for generations to come. It is designed to bring together the thoughts of as many people as possible – recognising that everyone has a role in ensuring strong, healthy foundations for the youngest in our society that will positively affect their lifelong outcomes.

“We launched the MiniBrum gallery last year to introduce children under 8 to the roles that science and engineering play in the city where they are growing up. By working with children, we aimed to develop a gallery in which they could develop their skills and understanding through fun and play.”

For more information on the survey visit www.5bigquestions.org.uk.