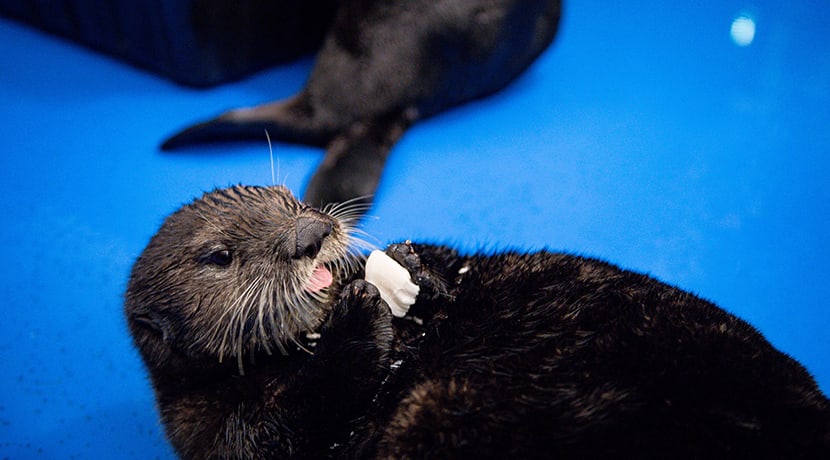 The UK’s first ever Sea Otters have safely touched down following a 5,000 mile journey from Alaska as part of a pioneering education and conservation project. The pair are now in quarantine at the purpose-built £multi-million Marine Mammal Rescue Facility in Birmingham, where they’ll become permanent residents.

Bosses at The National SEA LIFE Centre Birmingham confirmed that one male and one female Sea Otter* arrived at London Heathrow after having successfully completed a complex journey from their former holding in Seward, Alaska.

The two Sea Otters, who are yet to be named, were transported in custom-made crates, designed to meet their needs throughout the journey. After being transported from Alaska Sea Life Center in Seward to Ted Stevens Anchorage International Airport, the Sea Otters were loaded on to a Bombardier Global 6000 chartered aircraft from Quick Cargo Service and escorted by a team of welfare and veterinary experts for the duration.

Both Sea Otters were monitored by their care teams to ensure they remained safe and comfortable throughout the 9.5 hour flight. A veterinary expert was also on board, to guarantee the animals’ welfare.

Jonny Rudd, National SEA LIFE Centre Curator said: “We’re absolutely delighted the Sea Otters have arrived safely. This has been a complex but inspiring project and has taken global efforts and a collective vision with our conservation partners and the team at Quick Cargo Service in helping to prepare them for travelling to their new home.”

Allan Bach Christensen, MD of Quick Cargo Service, the freight broker for the movement, added: “We are thrilled and delighted to assist in the project of relocating the Sea Otters to their new home in Birmingham. It is with great pleasure we see they have adapted to their new surroundings. One thing is the right flight for the delicate needs; the chosen Bombardier Global 6000 is a perfect match for the task, although the accompanying passengers are to suffer in a 14 degree (C) cold cabin, while the VIPs rest in the back.

“However, the overall success of this project is due to the dedication and commitment of many teams, and equally important making sure all teams were at the right spot at the right time. That is our drive!”

After touching down at London Heathrow and border inspection completed, they were transferred on to a specialist James Cargo vehicle and departed for the final leg of their journey to Birmingham by police escort. Upon arrival at the Centre, they were placed in their dedicated sanctuary quarantine care pool for monitoring and resting.

The new rescue facility was spearheaded and purpose built last year with advanced technologies to mimic the natural wild habitat and environment of Alaska by the National Sea Life Centre in Birmingham to meet the strict requirements of Sea Otter guardianship. The United States Fish & Wildlife Service (USFWS) approved the facility after an arduous and financially challenging application process which has taken over 2 and half years to complete. No other UK environment can replicate such a habitat, with coastal waters too warm – only the technological advances of Birmingham’s new facility, which has engineering in place to emulate their natural habitat, was deemed suitable.

Rudd concluded: “The Sea Otters are rapidly adapting well to their new home and we'll continue to carefully monitor them both around the clock but we’re pleased with their overall progress and welfare checks, which have been taking place throughout the relocation. The co-ordination of this project has been down to so many people and we’re extremely grateful for all their hard work.”

Once on the verge of extinction after being hunted for their thick, rich pelt in the 1800s, Sea Otters remain a seriously threatened species being IUCN listed as endangered in some regions and now have a vital role to play in a ground-breaking marine education programme here, on the other side of the globe.

The hope is they will become inspirational guides to becoming better residents of the planet and now have a crucial role to play in the global mission to saving the “teddy bear” of the ocean.