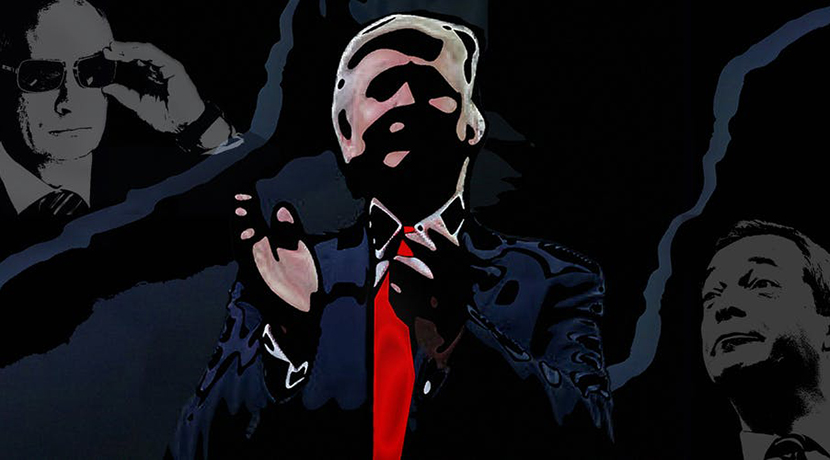 As the British public stands poised with girded loins, to welcome American President Donald Trump to its shores this July, elsewhere across our ‘sceptical’ isle, rumour has it that his comedy counterpart is already making waves in theatrical circles, starring in a musical parody guaranteed to make ‘satire’ if not Donald himself ‘great again’….

Having first shot to notoriety with the unashamedly irreverent ‘Boris The Musical’ in 2017, this latest offering from Blowfish theatre company takes narcissistic blonde demagoguery to dizzying new heights with its outrageous lampooning of American President Donald Trump – a man so teetering on the edge of caricature that Boris’ own particular brand of Etonian buffoonery feels like ‘small fry’ in comparison!

It takes a suitably brave – not to mention highly skilled company then – to not only take on ‘The Donald’ himself but the combined political might of Alexander Putin, Nigel Farage and Kim Jong Un in one sitting! Happily for comedy (if not the future of the world at large) Blowfish pull it off with signature aplomb, extracting every last morsel of satirical gristle from the grotesque carcass of world politics as we know it!

The year is 2020. Donald Trump (David Burchhardt) is running for re-election to make America great again (again!). But the presidency isn’t without its problems. There’s the over-excitable Kim Jong Un, who – for his next trick – seeks to blow up the moon! Then there’s Vladimir Putin (played superbly here by Natasha Lanceley), starved of Donald’s manly attentions and thirsting for cyber-fuelled revenge at all costs! Meanwhile, in post-Brexit Britain (well…what’s left of it), the now King Nigel Farage (a power-crazed, gold chain-touting Kyle Williams) plans to invade Scotland in a last-ditch attempt to raise some much needed cash to top up the royal coffers!  Enter Rod (Polly Bycroft-Brown), 823rd press secretary to Donald Trump, a hopelessly naïve defender of democracy who finds himself drawn into a complex web of political intrigue at the hands of Chief Minister to King Nigel, Roger Lavery (Laurence Peacock)…a shady political operator with an alternative (left) agenda all of his own!

So begins a riotous two hours of near-the-knuckle comedy every bit as grotesque, brazen and bombastic as its scarcely plausible targets. Drawing from the French tradition of ‘Bouffon’ championed by Jacques LeCoc, yet imbued with the razor-tongued spirit of the landmark British satires like Spitting Image, The Thick of It and That Was The Week That Was, Blowfish’s entirely unique brand of ritualized mockery brings its political subjects – quite literally - to their knees through an uncompromising mixture of slapstick, political parody, pathos and hyperbole. This is satire ‘Donald Trump’ style – unapologetic, at times, excruciating to watch but never anything less than utterly compelling!

Brought to life by a talented ensemble of physical theatre-makers, Laurence Peacock’s script may be big on brazen gags, but is never shy of tackling difficult subject matter. A memorable episode in which a demonic Kim Jong Un pops-up, Super Mario style, to gleefully describe the suicide of a colleague’s wife after being sent to a collective farm, is a particularly sobering moment amid the cartoonish-like chaos whilst Peacock’s acerbic lyrics leave no political group safe from attack…including the metropolitan liberal elite (‘You can’t trust the people with democracy’ after all. Oh…and never organise a liberal revolution on the same day as the final of the Great British Bake Off!)

A stand out moment for me however, came at the start of Act 2, in which a puckered-lipped Trump – realised brilliantly by the gifted physical comic David Burchhardt here - found himself surrounded by the manifest voices in his head, each one of them self-posturing, congratulatory, devoid of doubt and sporting obligatory blonde wig and baseball cap! A hilariously and intelligent piece of writing carried off with self-evident enjoyment by the company!

Dominic Lo’s infinitely hummable score skilfully accents the absurdity of the characters’ motives, whilst at the same time, allowing space for the machine-gun like lyrics to ring out in full force. In the ludicrously jovial The New Good Old Days for example – a folk-inspired homage to the happily-never-after of pre-EU Britain – Nigel Farage’s mindless nostalgia for the Britain of ‘old’ is brought to life by a chorus line of Morris-style ribbon dancers and skipping flautists spouting the lyrics; ‘No corporate tax, Poofs or Blacks/These are the good old days’ – political rhetoric made all the more shocking for being so painfully close-to-the-bone!

In a musical score teeming with highly entertaining numbers, particular highlights for me included It’s Putin; a techno-infused camp-fest complete with flamboyant choreographed dance moves and self-posturing machismo lyrics (‘You know why they’re afraid of me/This mother******* ex KGB/Tapping phones my abc/I learnt it in East Germany”) and Everything’s Better with Twitter, delivered by a squatting Trump from his toilet bowl whilst firing incendiary tweets (and other effusions) into the great unknown (“Deny, defame, distract, inflame/Dispute what the Fake news allege, My phone it plays my favourite game; Throw balls, the media fetch”).

Alternative facts aside, these guys know what makes ‘great (really great!) satire’! In this ever fluctuating political landscape of personality cults, populist takeovers, cyber terrorism and the ever present threat of imminent global catastrophe, it’s refreshing to know that a company as adept as Blowfish won’t be short of material anytime soon….I, for one, can’t wait to join them in the nuclear bunker!