What's On TV: the guide to your binge-watching bonanza 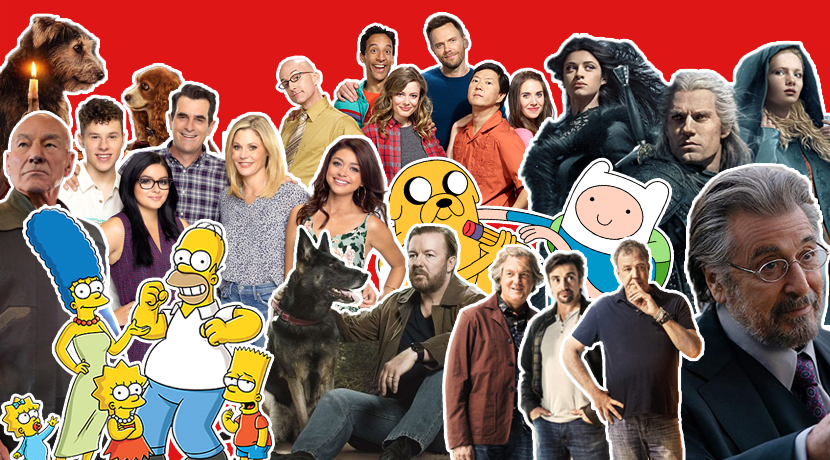 As we all prepare to spend more time at home, here are some of the latest releases and firm favourites on streaming services that you can binge-watch for the foreseeable future…

The cult American comedy, which ran 2009 to 2015, will be available in its entirety on Netflix this month. The plot revolves around a suspended lawyer, who is forced to enroll in a community college in Colorado, where he joins an oddball group of students. With an impressive cast of comedic heavyweights including Joel McHale, Chevy Chase, Alison Brie and Ken Jeong, it is a guaranteed laugh.

Holding the crown as the most watched international TV show is La Casa de Papel (better known as to English speakers as Money Heist) returns to Netflix with its fourth series. The Spanish thriller focuses around eight robbers, led by The Professor, trying to print millions of euros at the Royal Mint of Spain in seasons one and two, and stealing the gold in the vault at the Bank of Spain in season three. The fourth series is set to continue from the cliffhanger ending from the last, as the team continue their struggle against the police to escape the bank.

Ricky Gervais is back with the second series of his acclaimed black comedy-drama After Life. In the first series, we followed newspaper journalist Tony (Gervais), who after the death of his wife, contemplates suicide, but instead decides to live long enough to punish the world by saying and doing whatever he wants. Although he thinks of this as his "superpower", his plan is undermined when everyone around him tries to make him a better person.

The witcher Geralt, a mutated monster hunter, struggles to find his place in a world in which people often prove more wicked than beasts. The popular Netflix original fantasy series is based on the book series of the same name by Polish writer Andrzej Sapkowski.

Inspired by true events, Hunters follows a rag-tag team of Nazi Hunters in 1977 New York City who discover that hundreds of escaped Nazis are living in America. And so set out on a bloody quest for revenge and justice. But they soon discover a far-reaching conspiracy and must race against time to thwart the Nazis’ new genocidal plans. The strong cast includes the legend himself, Al Pacino.

After serving in World War II, Claire Randall is enjoying a second honeymoon in Scotland with husband Frank, an MI6 officer looking forward to a new career as an Oxford historian. Suddenly, Claire is transported to 1743 and into a mysterious world where her freedom and life are threatened. Based on the novel series of the same name by Diana Gabaldon.

Calling all Trekkies, Amazon has taken the Star Trek franchise a step further with its latest series, Star Trek: Picard. The show features Sir Patrick Stewart, reprising his iconic role as Jean-Luc Picard, a role which he played for seven series on Star Trek: The Next Generation. This new series follows the iconic character into the next chapter of his life.

Lady and The Tramp

Retelling the 1955 Disney classic, this live action remake makes its debut on Disney+. The romantic tale of a sheltered uptown Cocker Spaniel dog and a streetwise downtown Mutt is brought to life, as real-life animals have been used in this production, rather than CGI. Featuring the voices of Tessa Thompson (as Lady) and Justin Therous (as Tramp).

Amongst the entire Star Wars saga available on Disney+, the brand new streaming platform have produced the first live action series of the franchise, The Mandalorian.

Set five years after the events of Return of the Jedi and 25 years prior to the events of The Force Awakens, it follows the title character, the Mandalorian bounty hunter Din Djarin, and his exploits beyond the reaches of the New Republic.

Now this one needs no introduction. The Simpsons the longest-running American sitcom, celebrating 30 years in 2019. Set in the fictional town of Springfield, the show follows the Simpson family in their day-to-day lives, with plenty of parodies of American culture and society along the way. Disney+ have all 30 seasons of the show, which is over 600 episodes for you to enjoy!

Based on Stan Lee’s Marcel Comics, the ever-popular Marvel films follow superheroes whose mission it is to protect life both on earth and far beyond. The most popular heroes include Spider Man, Thor, Iron Man and Captain American. There are so many movies to choose from!

From Lisa Joy and Jonathan Nolan comes the Emmy-nominated dark sci-fi epic Westworld. Starring Evan Rachel Wood, Anthony Hopkins and Ed Harris, prepare for a trip unlike any other as the Western-themed amusement park, Westworld, sees visitors interact with cyber-humans. However, all hell breaks loose when the robots begin malfunctioning.

This Sky original is the most-awarded British series of 2019 with 10 Emmy wins, and dramatises the true story of the disaster at Chernobyl. As the flames died down, the lies, conspiracies and incredible acts of heroism began.

Much-loved US sitcom about an extended, ‘blended’ family going through the ups and downs of modern life. With Office-esque looks towards the camera from the characters and plenty of hilarious family fails, Modern Family is an easy binge-watch.

Twelve- year-old Finn rights wrongs and battles evil in the Land of Ooo, assisted by his magical dog Jake. With Jake the dog and Finn the human the fun will never end.