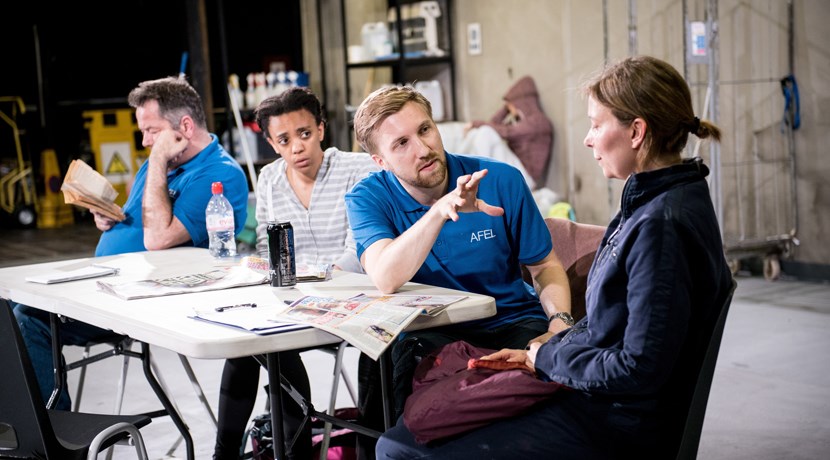 Tucked away behind the REP's main house theatre, a strip-lit backstage area becomes the meat factory setting for a new play by Alexander Zeldin. Beyond Caring begins with three agency workers arriving at an interview for a temporary cleaning job that will see them work for 14 days straight without a gap, with extra night shifts later added on.

Becky (Victoria Moseley) is a mother who can't get the time off to visit her child. Grace (Janet Etuk) suffers from crippling rheumatoid arthritis, but has recently been cleared for work after years of living on disability benefits. Susan (Kristin Hutchinson) is the worst off of the lot: we get our first intimations of the seriousness of her situation when Grace offers her a digestive biscuit, which she nibbles slowly and cradles like a precious jewel. Their job, as outlined by the 27-year-old boss Ian (Luke Clarke) is to join full-time staff member Phil (James Doherty) in cleaning the factory's communal areas, toilets and dry store.

Gradually, the audience is sucked into the quiet desperation of the characters. The dialogue sounds so real we might be watching documentary footage, though without a camera or narrator as a barrier, its impact is far more directly felt than that suggests. Ingeniously, Zeldin has managed to merge the depth and pacing of a multi-part TV drama with the immediacy that only live theatre can achieve. Immersed in cold, dismal surroundings with such precise and natural performances, it's all too easy to forget where you are, losing yourself to the extent that you physically feel the characters' pain. Furious, frustrated Becky paces like a caged tiger, pulsing with a pent-up, muscular rage that inspires both fear and pity. When it finally and inevitably vents itself on gentle Phil, we swallow down his tears and fight to keep his quivering under control. It gets stranger. Perhaps it's some kind of latent pack instinct kicking in that makes a viewer feel so sick with hunger watching Susan wrap up biscuits in tissues to take away with her. Others in the audience reported stiffness after seeing Grace physically unable to lift herself up off the floor, having been repeatedly being denied essential medication breaks. Even narcissistic Ian is more laughably tragic than truly loathsome – yearning to be liked and listened to, but not mentally capable of enough empathy or intelligence to work out why no one else can stand him.

The first day passes mostly uneventfully. Lights flicker, and another begins, almost exactly as before, but each time small changes break down the routine, mirroring the slow mental disintegration of the characters. Phil locks himself in the toilet for half an hour (“He does this sometimes,” says Ian nonchalantly). Pay day is repeatedly postponed with neither the factory nor the agency taking responsibility. Even though we know it's only for a fortnight, it seems interminable, each day blurring into the next without a glimpse of sunlight – more so when implicitly, though unofficially, mandatory overtime is introduced without a higher rate of pay. More so again for Susan, who literally has nowhere else to go. So the company grinds down and stretches out its staff like so much processed meat. There's no interval, and when the lights go down, the story hasn't so much ended as just stopped.

A frighteningly real portrait of contemporary exploitation in the dehumanising and under-regulated world of agency work, Beyond Caring is vital, urgent theatre that will leave you anything but.