Blackeyed Theatre's Jane Eyre: a classic on stage in the Midlands 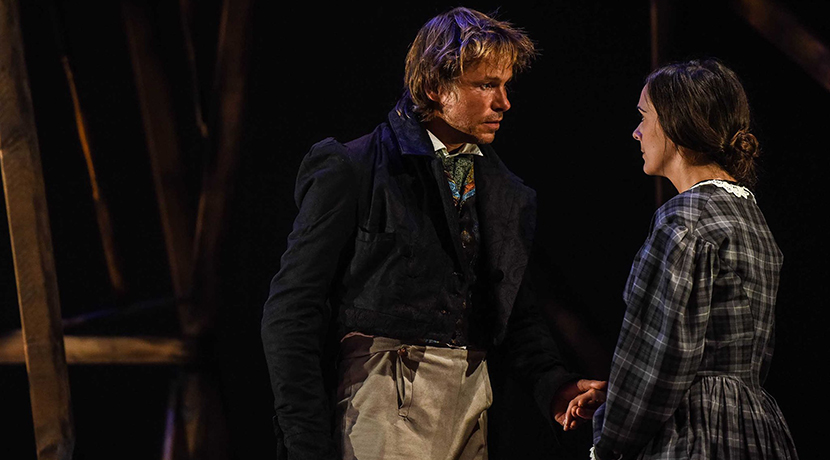 Charlotte Brontë’s Jane Eyre remains a classic in the English literary canon. Brontë was one of three surviving sisters who pioneered women’s fiction in the Victorian era, albeit under male pseudonyms to start with.

As one of the few women at the time to be accepted in London’s stuffy, primarily male literary circles, Charlotte Brontë was a unique and remarkable woman - something which reflects in her extraordinary work. Having lived a large proportion of their lives in Haworth Parsonage in Yorkshire, surrounded by rolling countryside but simultaneously somewhat cut off from the world, the Brontë sisters’ novels often explored female loneliness, women’s independence and love. Their works are also often punctuated by gothic notions, adding to the stories’ general gloom and mystery.

Jane Eyre is no exception - and, in fact, made Charlotte the most popular of the three sisters at the time of publication. Orphaned and treated cruelly as a child, Jane Eyre finds herself the governess at Thornfield Hall; a house whose owner simultaneously bewilders and intrigues Jane, before she falls in love with him.

Overflowing with passion, heartbreak and secrets, would Blackeyed Theatre do justice to Charlotte Brontë’s great work? Could Jane Eyre ever disappoint?

I can safely say that in Blackeyed Theatre’s production of Jane Eyre, the heart of the original story and its characters remain. Nick Lane’s adaptation stays true to its vision and certainly gives Charlotte Brontë all the honour she deserves.

I was particularly impressed with the writing of Mr Rochester, whose changeable moods and deep pain punctuates the action wonderfully and forms the clues to many of Thornfield Hall’s mysteries. Ben Warwick plays his main part extremely well.

Heroine Jane Eyre is taken on by Kelsey Short. While Short certainly characterises Jane Eyre’s endurance of spirit, I found she fell prey to overacting in places - more-so when narrating as her character than acting out the actual narrative.

My stand-out cast member, however, is Camilla Simson. She triumphs in her portrayals of Mrs Fairfax, Mary Rivers and Aunt Reed in particular - the first two acted with the mastery of wit that Charlotte Brontë’s supporting characters deserve, while the latter makes the perfect vision of a cruel relative common in stories with gothic tropes.

Eleanor Toms and Oliver Hamilton complete the talented quintet of performers with a multitude of excellently performed supporting roles, such as Adele Varens, Blanche Ingram and Diana Rivers for the former, and Sigmund Rivers and Mr Mason for the latter.

Aside from the acting performance and adaptation of the novel itself, Jane Eyre also excels in production value. The set, whilst relatively unchanging across scenes, is inventive in representing the characters’ movement. Costuming is particularly delightful and I relished in the minimal use of additional costuming and props to distinguish between the actors’ roles: with such recognisable changes in character and mannerisms between each of their roles, an extra scarf here or some flamboyant headgear there is all the cast need to transform themselves for their audience.

The work of composer George Jennings also provided me with much joy throughout Jane Eyre. The use of music really lifts the entire performance, furthering the suspense, intrigue and passion. Jennings is equally as sensitive to Bronte’s original text as writer Nick Lane, including creating songs from extracts of the novel itself and poems written by Charlotte Brontë and her sister, Emily.

Performance of the music of a production live on stage by its actors is somewhat of a rarity in theatre, but I always think it extremely effective when done well - and Jane Eyre certainly is. The range of instruments played by this cast is astounding and their voices, while not always perfect, marry together wonderfully to give a gentle acoustic folk vibe to the show’s music. I was particularly impressed by Toms and Hamilton as evidently skilled musicians.

Jane Eyre is a well-loved story of a woman’s pursuit of independence and love - a tale adapted countless times and done well by a few. Blackeyed Theatre is one of those few.