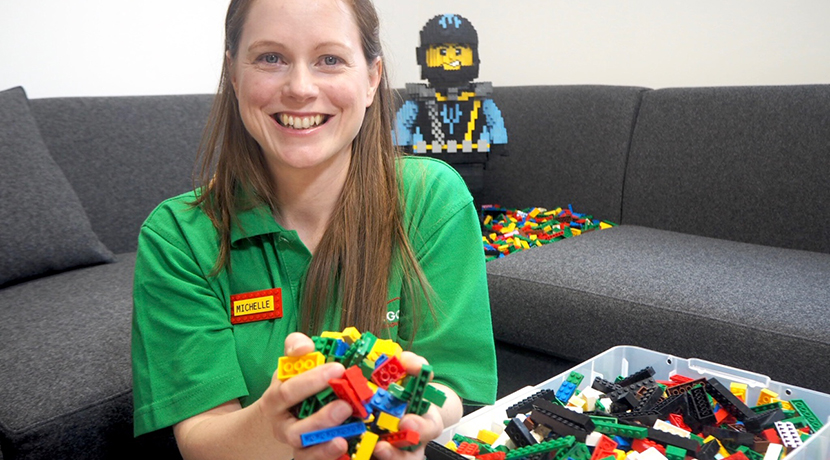 Michelle Thompson, 37, a HR Administrator from Lichfield, has landed the job of her dreams and coveted title of official Master Model Builder at the new LEGOLAND Discovery Centre Birmingham.

Recruitment for the role of Master Model Builder made international headlines earlier this year when it attracted over 7,000 applications from across the globe and just last month bosses invited fifty of the budding brick fanatics to take on a series of building challenges in a bid to whittle the applicants down.

Michelle said: “My colleagues actually told me about the role after seeing the LEGO mascot, Bertie, at New St Station. I’d caught an earlier train that day so I missed it all but it was one of the first things they said when they got in the office.

“My desk is well decorated with lots of LEGO mini-figures so it’s no secret that I harbour! They all know I have a love of LEGO and kept saying that this had my name written all over it.

“But it was my boss that actually sent me the application – she knew how perfect it was for me and had this huge belief which is what encouraged me to apply. She did add afterwards that she wasn’t trying to get rid of me though!” laughs Michelle.

She added: “Never in a million years did I think I’d get noticed amongst the thousands of applications, let alone get the job. It really is a dream come true.”

Michelle attended Brick Factor and after impressing the public and bosses with her builds of musical notes [A representation of something that means something to her] and the Bullring Bull [A local landmark], made the final six. After two gruelling rounds and stiff competition, Michelle was invited back for the final stage of selection and a formal interview by LEGOLAND Discovery Centre bosses.

Amy Langham, General Manager at LEGOLAND Discovery Centre said: “Michelle blew us away at her interview and quite simply, her desire to inspire others couldn’t be matched. She’s creative, has a lifetime love of LEGO and her passion radiated – right down to the LEGO cufflinks on her blouse!”

Reliving the moment she found out she’d got the job, she said: “It all still feels a little surreal if I’m honest. I’ve been playing with LEGO for as long as I can remember – now I’m going to be paid to play!

“LEGO has always provided me as an outlet for my creativity, especially as a child. Now I hope to inspire and inject the same passion I’ve conjured up over the years to many many others.”

Despite a record high number of applications, it was a role heavily male dominated and Michelle was one of just 2% of women to apply.

Michelle said “I hadn’t even noticed I was in the company of so many men at the time and it hadn’t dawned on me that this role would have had such a heavy weight of men apply. LEGO, in my opinion, is just something incredible that appeals to any gender and any age.”

Amy Langham, GM added: “It’s ironic that this post got billed as a dream job as Michelle really is our dream appointment! She’s creative, she loves LEGO and she can build – it’s what many people brought to the table but Michelle went beyond what we hoped for with this infectious ability to excite and engage others. She really is the perfect person for the job and worthy of the Master Model Builder title.”

Michelle is now working her notice at Mitchells and Butlers in the City and will start in post at LEGOLAND Discovery Centre next month, ahead of the centre opening to the general public in July. As the official Master Model Builder, Michelle will construct attraction structures, curate exhibitions and mentor children and families in the creation of their own model masterpieces in the centre’s Creative Workshop.