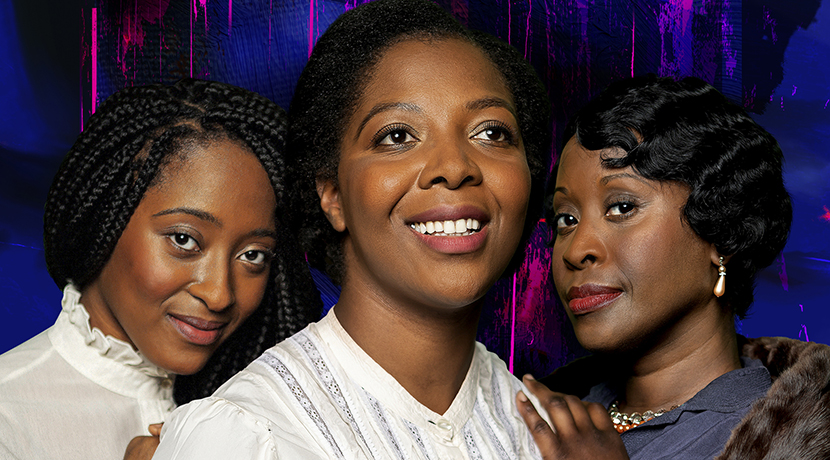 Alice Walker’s award-winning novel, The Color Purple, tells the ground-breaking story of the life of an African-American woman named Celie, who is living in the deep south of the United States in the first half of the 20th century. Left in the care of her abusive stepfather, who later marries her off to an equally abusive ‘Mister’, Celie’s tale is one of triumph in the face of adversity, bigotry and sexual & emotional abuse.

Steven Spielberg’s 1985 film adaptation of the novel, starring Whoopi Goldberg and Oprah Winfrey, received 11 Oscar nominations and was quickly made into a show for Broadway. So this Birmingham Hippodrome and Curve Leicester co-production certainly has an impressive history to live up to. Does it fall short of the mark? “Hell, no!”.

Astonishingly, The Color Purple manages to convincingly present 40 years in the lives of its characters in little more than two hours. Subtle changes in costuming mark the different stages of Celie’s life, from teenage years to middle age. The audience is taken on the most intense journey, watching Celie break free from her abusers and realise that she’s a confident and beautiful gay woman.

All the tragedies of her life are punctuated by moments of joy, sass and intense love. Many of these are where opportunity for song arises and almost always mark a moment of female solidarity and unapologetic feminism.

I cannot fault the effort and precision of a single performer. The mind-blowing musical talent of all those on stage is very clearly in evidence. However, there are a few who particularly stand out from the crowd…

In the role of Celie, T’Shan Williams’ showcases an astounding range. She clearly has the most fantastic ability to command her voice while also giving an extremely heartfelt performance.

The trio of Doris, Darlene and Jarlene - played by Danielle Kassaraté, Rosemary Annabella Nkrumah and Landi Oshinowo respectively - are utterly delightful. They act as a Greek Chorus of sorts, coming on stage with perfect harmonies and, as the town’s resident sassy busybodies, providing the audience with all the latest gossip. Last night’s audience relished every moment the trio were on stage, and they certainly provided many a laugh-out-loud moment.

Last but certainly not least, Karen Mavundukure’s portrayal of the feisty Sofia is exquisite. Mavundukure commands the stage just as effectively as her humorous, no-nonsense character commands the respect of those around her. Sofia’s story, much like Celie’s, is one of resilience and forgiveness, and Mavundukure captures the character’s emotional journey beautifully.

The Color Purple is simply sublime: a story of female empowerment at its very finest. As simultaneously the most uplifting and gut-wrenching story I’ve ever witnessed on stage, it is certainly a highlight of Birmingham Hippodrome’s summer season.