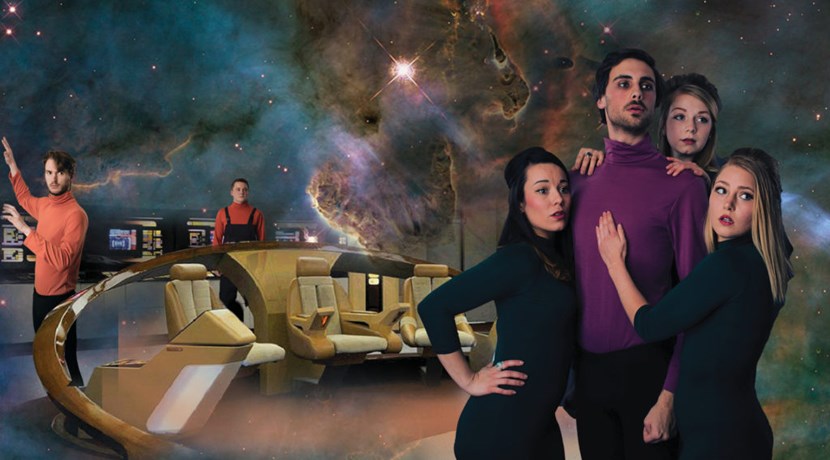 It’ll be all right on the night – unless of course it happens to be a low-budget sci-fi epic with a disgruntled cast led by a demanding George Vere, aka the heroic Captain Harrison.

Space worms, champagne and spectacularly silly props and costumes are all par for the course in this absurd 60s Star Trek-style adventure, but unbeknownst to the hilariously oblivious George, so too is full-scale mutiny. The result is certainly memorable, just perhaps not in the way he had in mind – think The Play That Goes Wrong meets The Office in space. It’s theatre, Jim, but not as we know it...

What starts out as the sometimes musical story of Captain Harrison’s great bravery, bare-handedly beating up alien invaders and being rewarded by the tight-skirted space chicks who “orbit him like moons”, soon turns into a delightfully disastrous drama, with layers of fiction and reality collapsing in upon each other like matter in the deadly black hole that no one can escape. Allegedly.

All is performed with total conviction by a cast much better than they pretend to be, the actual direction as masterful as it appears to be manic. Always game for almost anything, the Birmingham audience at the Old Joint Stock were totally on board for the ride, gleefully receptive to rebellion, role reversals and last-minute revisions – not to mention adding to the madness with some unplanned but well-timed mishaps of their own.

Will Captain Harrison ever defeat the evil Zaglar and be reunited with his beloved wife? Will the crew continue to put up with his preening self-importance? Will Evans (Aiden Willis) manage to remember all his lines? The one question we can answer is whether or not they’ll get their glowing local review – this is laugh-out-loud funny, zany, anarchic and joyously unpredictable stuff. The rest, you’ll have to beam aboard The Starship Osiris yourself to find out.

Reviewed by Heather Kincaid at the Old Joint Stock