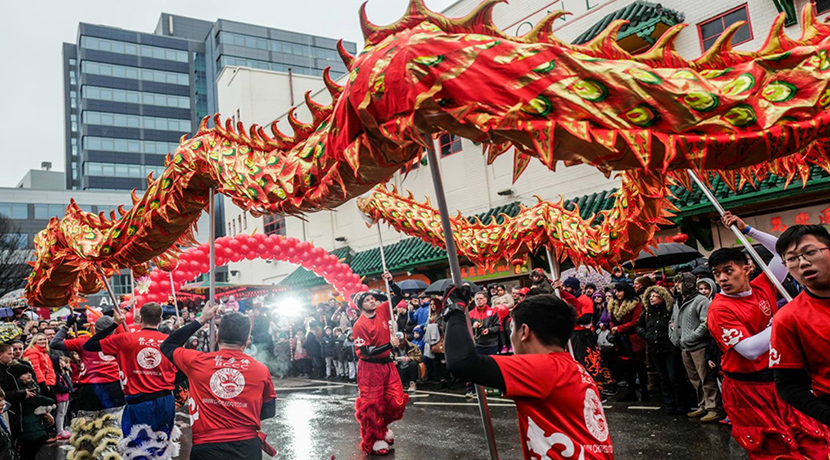 Colmore Business District will for the first time be at the heart of Birmingham’s Chinese New Year celebrations later this month.

The annual event, traditionally held in the Southside and Chinatown area, has grown in popularity and now features music, dance and displays across the city centre between Thursday, February 15, and Sunday, February 18.

Colmore BID is co-sponsoring Chinese New Year in Birmingham and the District will come alive with colour as Colmore Row trees are adorned with red and gold ribbons to help welcome the Year of the Dog.

On Friday, February 16 – the actual date of Chinese New Year – there will be a wide range of performances, lion dancing and food stalls on the grounds of Birmingham Cathedral, Colmore Row, between 12pm and 2pm.

The celebrations arrive in Birmingham’s business district at midday, with the traditional Chinese lion performing a dance and visiting businesses in the area to ‘wish them good luck’.

The lion symbolises luck, wealth and prosperity and it’s believed that the longer it dances, the more luck and wealth it will bring. Businesses in and around Colmore Row can request a visit by clicking HERE

At 12.45pm, the cathedral will open its doors for a special concert from the Birmingham Conservatoire (1-2pm), alongside a Chinese folk quartet and classical pianist.

“Businesses in the District can get involved in a variety of activities on Friday, February 16, including a lion dance which will bring you good luck and prosperity, and there is a free concert in Birmingham Cathedral featuring music from the Royal Birmingham Conservatoire.

“It is important for Colmore BID to support this cultural activity recognising the importance of Chinese businesses and Chinese inward investment to the city.”

Chinese New Year Birmingham continues on Saturday, February 17 with performances in the Bullring between 12pm and 1pm.

The grand finale is at Southside – and for the first time there will be two stages at the Arcadian and outside the Hippodrome.

There will be a funfair, performances and food stalls from 11.30am to 4.30pm.

The festival welcomes more than 15,000 each year with all events organised by Chinese Festival Committee and jointly managed by Birmingham City Council and Birmingham Hippodrome.