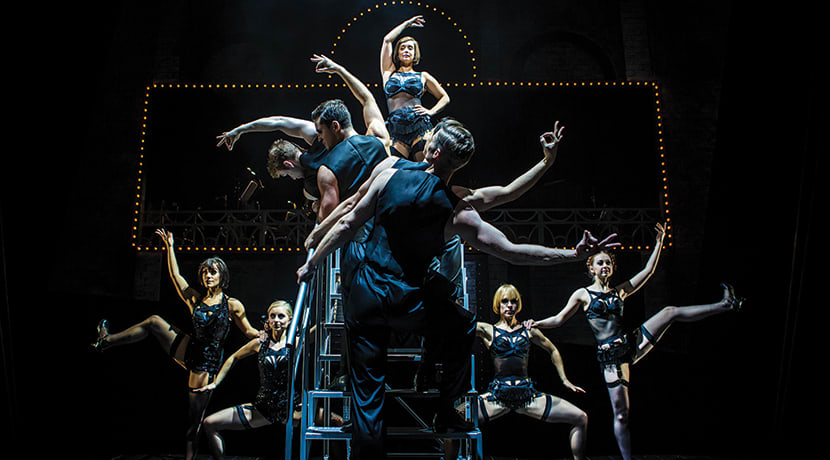 When a show visits the region which, between its stage and screen versions, boasts multiple Oscars, BAFTAs and Tony Awards, it makes sense to get along and check it out. Cabaret is one such show.

John Partridge here takes on the role of Emcee, with Kara Lily Hayworth stepping into the lead part of the legendary Sally Bowles, a nightly performer at the infamous Kit Kat Klub in early-1930s Berlin. Featuring ‘show-stopping choreography, dazzling costumes and some of the most iconic songs in musical theatre’ - including, of course, the famous title number - Cabaret is helmed by National Theatre Artistic Director Rufus Norris and choreographed by the Olivier Award-winning Javier de Frutos.

The landmark musical visits the Midlands next month, with West End star John Partridge taking on the iconic role of Emcee. What’s On spoke to the former EastEnders actor and MasterChef winner to find out more...

Complete with kicklines and burlesque costuming, Cabaret has all the razzle dazzle you’d expect from a show-stopping musical. But even all of the legendary Kit Kat Klub’s  incredible decadence can’t hope to conceal the sinister backdrop against which Cabaret unfolds: the rise of Nazism in Germany. Set on the cusp of 1930s Berlin, the musical’s characters navigate a world of showgirls, seedy nightlife and burgeoning antisemitism.

“It’s an honour to be starring in this production,” says John. “I feel a great amount of privilege to be a caretaker of such a great work and to be walking in the footsteps of such performance giants. It’s also incredibly daunting because, for an actor, there’s no bigger challenge than taking on a task such as this, but there’s also no bigger reward. Cabaret is an iconic show and its music is  legendary. I really can’t wait to have the opportunity to perform in such a classic.”

The show is directed by Rufus Norris - the artistic director of the National Theatre - and features choreography by the Olivier Award-winning Javier De Frutos.

“Rufus has a great sense of vision,” says John. “Let’s not forget that the subject matter and choreography were already groundbreaking when the show was first released. Rufus’ production pays a great homage to the original, as it very carefully modernises the production while keeping its very essence alive. I think that’s the best way to rework a classic: to have the fibre of the original within the revisited and revised work. Rufus managed to do that really well, which is why I think this particular production has been so successful.”

John’s character of Emcee is a complex one: “He has so many layers. He’s both a performer and an observer. He’s there to inform, educate and entertain the audience. He’s a narrator and orator of sorts, while also being a showman. He’s all the things I wish to be! Emcee really is a gift of a role, but it’s also not for the faint-hearted. I’m sure there are ways to get the character very wrong, and I just hope that I don’t do that!”

So what are the show’s highlights as far as John is concerned?

“It’s so difficult to pick out a favourite part. My eyes are bigger than my belly, as my mother always said! Obviously I love Willkommen because it’s one of the best opening numbers of any musical ever written; it’s truly spectacular, and this production’s staging of it is legendary in its own right. It’s a modern classic.

Money has to be another standout. The lyrics, the choreography, the timing, and all of that together - just wow! I think if you wrote an equation for a musical number, it would equal Money. Lyrically, it’s the one I’m looking forward to doing the most.

“Also, If You Could See Her is particularly poignant right now. Listening to the actual words of that song and their meaning is so   incredibly powerful and so politically relevant today. The rise of antisemitism in the UK and within our own political system is alarming, to say the least. Once again, with these classic shows, you can definitely say they never go out of style. As much as we think we progress, human nature seems to be constant in some way, and I think the timely relevance of Cabaret really shows how society maybe hasn’t progressed as much as we presume. I don’t think I’m going to enjoy singing If You Could See Her, but regardless of that fact, it’s still a very important narrative to tell.”

The homophobia rife in Cabaret is also something that resonates strongly with John...

“I’m currently rehearsing a piece called The View Upstairs, which premieres at Soho Theatre, London. It follows a largely forgotten piece of LGBTQ+ history, where 32 people lost their lives in a fire in New Orleans in 1972.

“On top of that, it’s currently the 50th anniversary of the Stonewall Riots. We had the Orlando shooting in 2016, where 49 people lost their lives. A few weeks ago, two women on a bus in the UK were brutally attacked for being gay. People ask why we have a Pride festival when there’s no festival for being heterosexual. I think there’s never a time not to demand to be seen, to be heard and to have equal rights - be that the LGBTQ+ community, religious groups or just general humanity. I’m an openly proud gay man, but my sexuality wasn’t something I considered as much when I was younger. I think my perception of the world has changed as I’ve got older, and I’m more aware than ever that all these voices need to be heard. Cabaret covers all these bases and shows us exactly why we must continue to listen.”

John is very much looking forward to visiting the region with the show: “Midlands audiences are very vocal. They let you know exactly how they feel, whether that be good or not so good! I love that, because it’s a great barometer for how you’re doing as a performer. When you’re touring and doing the same show night after night, it’s always good to have someone keeping you in check, and Midlands audiences definitely do that!”

Looking back over his career, does John have a particular highlight?

“I honestly can’t pick one! I’m really, really fortunate that I came into this business at 16, went straight into Cats in the West End and am now about to turn 48. So I’ve been doing this for 32 years professionally. I’ve appeared in over 20 West End shows, countless UK tours and even had a TV career. I think that while I can’t pick out a highlight, my favourite thing about my career is its longevity. The fact that I’m still able to do what I love, and that I’m lucky enough that producers still want to hire me, is amazing.”

There’s not a lot John hasn’t done in his career, but he still has one stand-out dream: “There’s one show I haven’t been in, and that hasn’t been to the UK, actually - The Boy From Oz. I would absolutely love to be in it. Hugh Jackman won a Tony Award for it on Broadway. So if anyone’s interested in producing The Boy From Oz starring John Partridge, feel free to contact me at any time!”

John showcased his culinary talents last year by winning Celebrity Masterchef: “I’m an avid cook. I’m just in the process of organising the photo shoots for my first book, a food memoire called There’s No Taste Like Home, which comes out in April 2020. There are over 100 recipes in it. My food narrative is very much connected to my history. I think food is like a great piece of theatre or a concert. You can hear a certain song and be transported back to an exact moment in time, and I think food is exactly the same. My earliest food memories, the food of my childhood, the food my mum and nan made me, school dinners - they all evoke strong memories for me, and that’s what I draw on in this first book.”

Rufus Norris’s reworking of the much-loved musical is astoundingly good. His inventive enhancement goes more deeply and darkly into Nazi mentality than previous productions and exposes the tarnished tinsel of cabaret life in 1930s bi-sexual Berlin for the façade it really was.

He dutifully preserves the show’s existing excitements – the razzmatazz of the songs and the glamour of the show girls - whilst giving choreographer Javier De Frutos full rein to fill the stage with ugly, ungainly and distorted routines. The vision of the piece is clear, as it builds to a stunningly sinister finale, with Auschwitz overtones, that silenced the audience.

It all opens with the classic black camera shutter image, though which emerges a more than slightly repulsive Emcee, with an oily kiss curl, lurid make up and chunky thighs, which he caresses ever so seductively. Casting a proper actor to play the role, rather than a TV talent show contestant, lays clear Norris’ intention that this is going to be no cosy Cabaret. John Partridge brings the house down with his Max Wall walk and has great fun in bed with two Rhine Maidens and a giraffe. But his faltering falsetto as he starts to sing ‘Tomorrow Belongs To Me’ truly captures the counterpointed hope and dread of the German people at the rise the Third Reich. He also has the balls to strip naked and join the final nude tableaux.

Sally Bowles is an interesting case. In Kara Lily Hayworth’s hands she is no gushing show girl. She plays the Burlesque star as a frightened bird with a stubborn streak. This Sally does know what’s going on but, like many Germans at the time, she doesn’t want to leave her comfort zone to face the future. Her melancholy song ‘Maybe This Time’ -after she discovers she is pregnant - is tenderly poignant; and the reprise of the title song is presented before a hall of mirrors…reflecting her frailty and shattering her dream.

But the surprise of the show for me is the inspired casting of Anita Harris as the pragmatic Fraulein Schneider. With her wealth of experience and easy talent she turns the supporting role of the boarding house landlady into a star turn. The voice is perhaps a little huskier these days, but she has sprightly grace, perfect poise and a wonderful ability to express dignity in despair as she faces up to her dilemma. Her troubled ballad “What Would You Do?” beautifully encapsulates her moment of realisation. Does she marry the Jew who loves her … or take the cautious long view?  It’s a powerfully nuanced performance that makes you believe her character really has survived war and revolution and can survive this new threat.

The whole scenario is seen through the eyes of the clean-cut American novelist, modelled on the author Christopher Isherwood, and played by the returning Charles Hagerty whose body language, when he discovers he’s been couriering for the Nazis, conveys the whole horror in one moment.

Don’t get me wrong. There is a lot of clever comedy to enjoy in this upgrade. The show is liberally laced with absurd humour. But there were times when the laughter was overwhelmed by our knowledge of what was to come. And watching a show about the destruction of democracy on the very night our own House of Commons was debating whether to bother with it, was a not entirely comfortable experience.