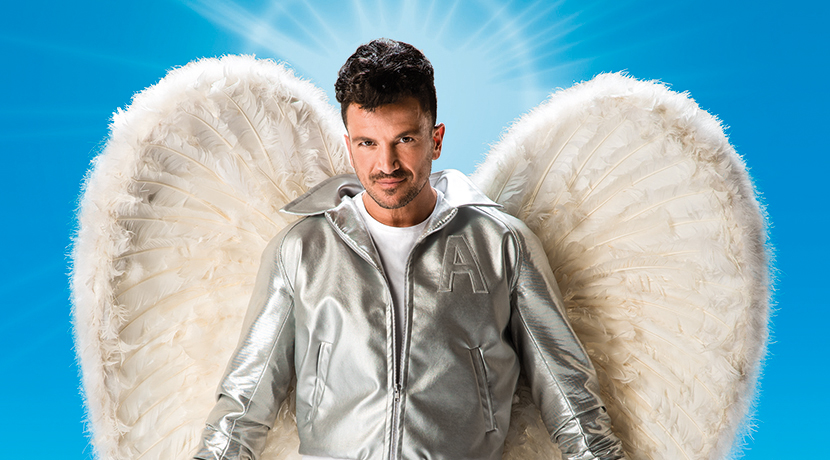 Gritty and glamorous, Grease is one of the most iconic shows of the 20th century.

Producer Colin Ingram insists that this new production will refresh and revive the hit musical, keeping it ‘fresh, relevant, vibrant and young’. What makes this version different is that it’s more in keeping with the original Broadway production written by Jim Jacobs and Gordon Casey, featuring songs never before heard in any staging of Grease in the UK.

‘Growing up in Australia, I remember when the film came out and I went to see it in the cinema at least 15 times,’ explains Peter Andre, who plays Teen Angel. “I loved it! Then I had it on VHS. It was such an iconic film. I always had this dream of going back to the 1950s, like when people say if you had a time machine and could go back to any era, where would you go. The ’50s would always be my answer. I think there’s something about that era. I loved watching Grease and was desperate to be a part of it, so when the opportunity came up to play Teen Angel, I was delighted.”

So where does Peter get his inspiration for the role: “The Fonz is definitely my rebellious ’50s inspiration for this part. The Fonz was a legend, and he and Danny Zuko brought about that iconic style of blue jeans, white t-shirt and leather jacket. Those rockabilly vibes are definitely something I’ll be thinking about during my performance. I remember at school we all loved to dress like that.”

Peter’s father and children have also influenced him in preparing to play Teen Angel: “My father was always there to give me the best advice when I was starting out in my career. When I was offered a recording deal live on television when I was 16, I was the happiest person alive, but my dad insisted I finish school first. I was upset because I thought they might change their mind if they had to wait for me. But I’m really grateful for that advice now, and it’s something that I want to pass onto my kids. My kids ask me why they have to go to school when I didn’t get where I did in my career directly from studying. But I always insist that school is the basis for everything, for all learning about life. I guess that’s also why the role of Teen Angel appeals to me so much, because he appears to Frenchy to encourage her not to drop out of school.”

The new production is blessed with the creative input of renowned choreographer Arlene Phillips. Peter explains what this means for Teen Angel: “I’ve been told that this role is Teen Angel with a twist… and I’m just about as much in the dark with that right now as the audiences will be when they arrive.

“Teen Angel is such an iconic part of the Grease film, but they definitely plan to make that scene a much bigger and better part of this production. With Arlene Phillips at the helm, I think everything will be fabulous. She’s talking about making the moves more contemporary, but also going back and looking at the original Broadway production and the dancing from the ’50s itself. There have been rumours that I will be suspended in some way to fly in, in true Teen Angel style, but I haven’t told them yet that I’m scared of heights! I’m not into sky diving or bungee jumping or anything like that…”

Despite focusing on his extensive music career, Peter’s love of theatre really shines through: “I think theatre is the root of all performance. You look at some of the A-list Hollywood actors and they either start out in theatre or return to it later on. Theatre is where performance starts and where it ends: it’s truly the root of it all. I did Thriller in the West End for the Prince’s Trust, and there’s talk of me doing other stage shows as well. Unfortunately, it’s the commitment and long amount of time spent touring that makes       theatre difficult for me, but I can do a few bits here and there, which is great, and I’m really looking forward to Grease.

“The show is going to be electrifyin’! The visuals, lights, costumes, acting, singing and dancing - it’s truly going to dazzle!”

Grease The Musical has a history of making stars of its actors. John Travolta himself started out in the original Broadway production before becoming a huge movie star.

Taking on the role of Danny Zuko in this latest version is Dan Partridge: “When you go into this industry as a performer, especially in times where you don’t have so much success, to make a living out of this is an absolute dream come true,” says Dan. “In terms of  aspirations, I always want to go higher and further; to go into film and television. The sky’s the limit. Like Peter Andre says, you’ve got to climb that mountain and turn ‘impossible’ into ‘I’m possible’.

“What’s so exciting about this new production is that it has all the iconic songs and everything that audiences love about Grease, alongside the fact that it’s a brand new production. The script has been improved, so that we have a bit more of the historical context in there, which is what makes it grittier.

There’s unbelievable casting, especially with Peter Andre, even if he does make lots of terrible dad-jokes! Then, on top of that, Arlene Phillips choreographs it. There really are some incredible household names on board with this new production.”

“It’s an honour to be making my professional debut as Sandy,” she says. “To fulfill this dream role at such an early stage in my career is mental - scary but also very exciting. I’m really interested to play Sandy in my own way and challenge the stereotype of what the character can be. I think I’m slightly punchier than the traditional Sandy, so I’d like to bring some of my own personality and experience to the role. With this new UK tour and production, it just seems like the right time to bring something new.”
So what are Martha’s hopes for her career?

“Gosh, I’m just happy I’ve even got this far! My aspirations are to find fulfillment in whatever I do. Obviously there are roles I’d love to play and shows I’d love to do, like Grease, but I just want to feel like I’m applying myself creatively in anything that I put my mind to. So whether that’s going into teaching for a bit after Grease or going on to do more performing, I just want to do my best in whatever the next opportunity happens to be.”

Grease The Musical shows at Birmingham Hippodrome from Tuesday 13 to Saturday 24 August, with Peter Andre playing Teen Angel from 13 to 17 and 21 to 22 August only.