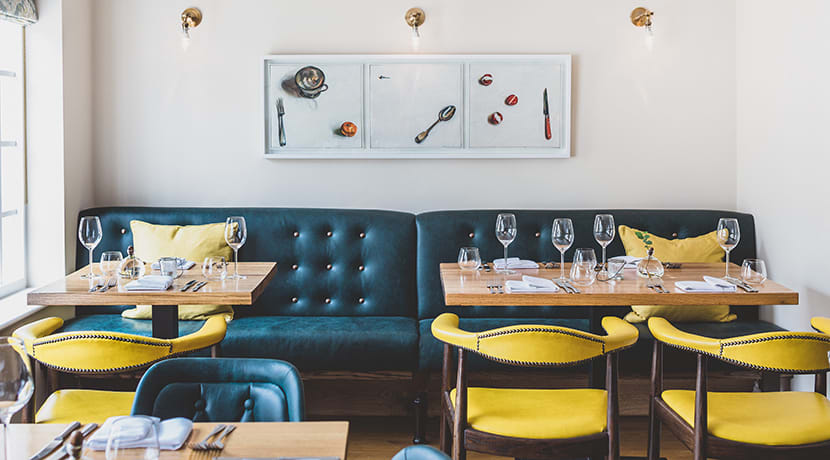 Previously known as The Clive Restaurant with Rooms, The Clive Arms, just west of Ludlow, has recently reopened following an extensive refurbishment.

The menus, which comprise breakfast, lunchtime, dinner and cheese - feature food predominantly from the estate’s own farms and Walled Garden. The chef also makes the most of the inn’s sister business, Ludlow Farmshop, which houses an array of artisan producers, including a bakery, dairy and butcher.

My partner and I were welcomed into the aesthetically pleasing venue with open arms and made to feel welcome from the moment we arrived. As well as the rear courtyard, there are tables and chairs on the grass to the front of the restaurant.

We visited on a sunny evening, so not surprisingly every spot was taken. Inside, a variety of seating options were available, from comfy tub chairs in canary yellow to deep blue leather upholstered booths.

We started the evening’s proceedings with two cold pints of Staropramen whilst perusing the all-day menu and the evening à la carte menu, which featured four starters and four main courses.

To begin, we opted for the cider poached pig cheeks and the crab & scallop ravioli. Served alongside beer-pickled onions, black pudding hash, crispy bacon and cider sauce, the pig cheeks were divine. Cooked nicely and showcasing a sweet flavour, the meat perfectly matched its accompaniments. The crispy bacon added a welcome salty flavour, to balance out the sweetness from the cider sauce. The stunning beer-pickled onions and the tasty black pudding hash gave the dish added substance.

Across the other side of the table was the ravioli dish, which just topped it for me - in fact, it was probably my favourite dish of the evening. The soft and ever-so-moreish ravioli sat atop a spiced tomato fondue. A creamy and strong-flavoured langoustine bisque and salty samphire added an extra touch of magic. The pasta itself was cooked perfectly, as was the mouthwatering crab & scallop concoction. The flavour combination was one of dreams. I could have eaten it three times over!

For my main course, I ordered rump and neck of lamb (sourced from the farm), while my partner chose guinea fowl supreme. The latter was served with butter poached potatoes, watercress purée, heirloom carrots and tarragon sauce. The carrots and purée not only added a sense of freshness to the dish but also brought welcome bursts of colour to the plate. The meat itself was cooked well and featured crispy skin - always a plus in my book!

The lamb was cooked to absolute perfection, showcased a melt-in-the-mouth texture and was           accompanied by a sizeable portion of jersey royals, braised gem lettuce, peas, smoked bacon and turnips. I didn’t get much from the lamb jus, but all in all it was a beautiful dish, and one that I’d certainly recommend. The quality of the produce at The Clive Arms really does shine through -  and as well as being downright delicious, every dish presented to us was visually stunning.

There’s a cheese menu (customers can order a three, four or five-cheese platter with accompaniments) as well as a full dessert menu.

After catching a glimpse on a neighbouring table of two delectable-looking options, we thought we’d follow suit. The first of the two was named Red Velvet and featured a tasty mix of nicely cooked micro sponge pieces, creamy ruby chocolate shards and a buttercream sorbet. The second dish was a coffee soufflé served with biscotti and salted caramel ice cream. Although I would’ve liked the soufflé to boast a more intense coffee flavour, it was devoured nevertheless.

I thoroughly recommend a jaunt into the countryside to visit The Clive Arms - the friendly service, stylish interior and high-quality and flavoursome food certainly make for a very enjoyable experience indeed.