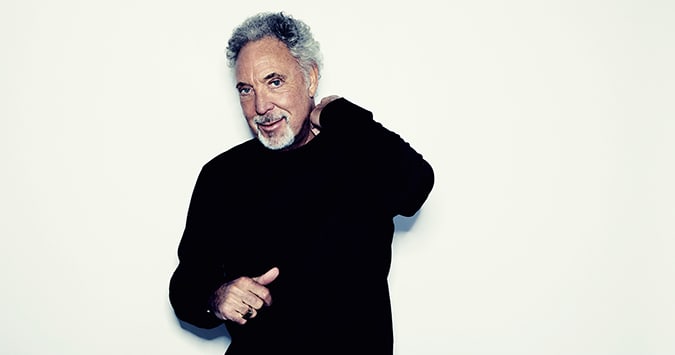 Legendary icon Sir Tom Jones is coming to the QEII Arena in Telford Town Park as part of his summer Tour.

The unmistakeable voice will perform live on Sunday 28 June. Tickets will go on pre-sale at 9am Wednesday 29 January through Tickets Telford.

With a career spanning over five decades, Tom is still a tour de force in music, winning the admiration of critics for his live performances and a career that has seen him record over 40 albums! In that time, he has amassed more than 100 million record sales, scored 36 UK top 40 hits and to make him a true national treasure, he was knighted for his services to music in 2006.

This summer’s evening performance in the splendid surroundings of Telford Town Park, from one of the most iconic voices in music, is the perfect ticket for a family day out, with a scrumptious selection of food and drinks also on offer. Special guests performing on the day will be announced in the coming months. The previous evening will see Jack Savoretti and special guest Imelda May take to the stage.
Sir Tom Jones’ 50+ year career has gone from strength to strength and at the age of 79, he received the best reviews of his career for recent albums Long Lost Suitcase, Spirit In The Room and Praise & Blame.

Jones has a fundamental interest in a wide range of music. Although he is well known for hits including It’s Not Unusual, Kiss, Delilah, What’s New Pussycat, I’ll Never Fall In Love Again and If I Only Knew, he is first and foremost an artist with a true rhythm and blues soul. He has remained a vital recording artist, with his 1999 album Reload the biggest selling (5m) of his then 35-year career spawning the huge anthems Mama Told Me Not to Come, Sex Bomb and Burning Down the House.

Tom shows no signs of slowing down as he is a prime-time Saturday night TV fixture, in his role of coach and mentor on ITV’s The Voice alongside fellow coaches will.i.am, Meghan Trainor and Olly Murs, and last summer saw a sell-out tour as Tom and his band toured the US, UK & Europe, bringing his Voice finalists out on the road as show openers and special guests.

The show is being promoted by three times Live UK Regional Promoter of the Year Orchard Live who produce their first weekend in Telford, in addition to a run of concerts across the country in 2020.

Pablo Janczur, Director of Orchard Live said: “Sir Tom has a voice like no other, it’s ingrained on global pop culture and we can’t wait to see what songs he brings out of his armoury for this show. We’re looking forward to spending a great weekend in Telford, hopefully with the great British sunshine we were blessed with in 2019 blazing down on us for an unforgettable weekend of music”