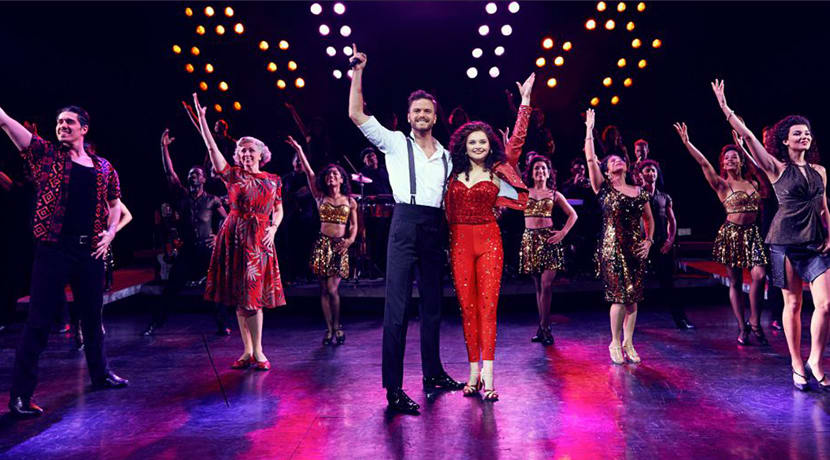 Smash-hit musical inspired by the true love story of Emilio and Gloria Estefan and charting the duo's journey from their origins in Cuba, onto the streets of Miami and finally to international superstardom.

Feel the rhythm of the music getting stronger as hit musical On Your Feet! - the story Of Emilio & Gloria Estefan, congas into the Midlands next month...

Gloria Estefan started her career as the lead singer for Miami Sound Machine, who had  previously been called Miami Latin Boys. The group were a rip-roaring success in the 1980s, with their iconic and varied hits including Conga, Anything For You and Rhythm Is Gonna Get You.

Marrying bandmate Emilio and taking his surname in 1978, Gloria went on to become a 1980s icon. The couple were living the dream, but thought it had come to an end when Gloria broke her back in a bus crash in 1990.

On Your Feet! tells their story, one of music, dancing, love, passion, terror, heartache and resilience. The show hits the road off the back of a very successful West End run.

“It’s been phenomenal - people seem to love it,” says Gloria. “There are people who’ve written to say they were entertained or cried or were reminded of different times in their lives through the songs. That’s the point of the show - to connect with people on a very human level, which is what we’ve always tried to do.”

Although all the events in On Your Feet! did  actually happen, Oscar-winning writer  Alexander Dinelaris has taken the odd liberty here and there.

“It’s all true,” Gloria confirms, “although maybe not always in chronological order. It’s the same with the songs - they’ve been moved around to suit the story. The only thing that’s not true is Emilio having a six-pack, as he does in the show. He doesn’t really have washboard abs!”

Although Gloria isn’t starring in the musical herself, she’s been incredibly pleased with the casting for On Your Feet!.

“What’s impressive to me is how much love and devotion everyone who’s played me in the show so far has put into it, and how much they identify with me. These have mostly been Cuban-American girls like me, so they’re kind of telling their own story too, and that makes me feel very happy and proud.”

So which elements of the show does she most enjoy?

“There are a couple of really big numbers. Tradición is spectacular - and then of course there’s Conga, where you literally see how it grows and grows then explodes in joy. I co-wrote If I Never Got To Tell You with my daughter, Emily. My daughter couldn’t be in the show because she hadn’t been born during the timeframe, so I tried to wedge her in there somewhere in any way possible. It’s beautiful that she comes through in the only original song. In the musical it’s a very poignant song; it’s my mum telling me the things she wished she’d told me before coming to visit me in hospital after the bus crash.”

Both Latin sounds and Britpop were major  influences on Gloria when she was growing up.

“The old Cuban standards were always playing in our house, and I sang as soon as I could talk. Music was big in our household. Then I started listening to the British Invasion. I remember pulling into a laundromat parking lot with my mother and hearing Ferry Cross The Mersey. My hair stood on end. I didn’t want to get out of the car, I was so enraptured. That song really is like a Bolero in its rhythm. British bands were listening to a lot of Latin music and The Beatles recorded Besame Mucho. All that mixing of sounds had a huge impact on me, and so I had all this musical vocabulary to draw from.”

“The name switch was Emilio’s idea. I didn’t want him to add my name to the band because we were successful and I was happy with my bandmates, nor did I want it to be just ‘Gloria Estefan’. But he was like ‘People are identifying with you, they think you’re beautiful and sexy, they need to know your name’.”

Down the years, the Estefans have certainly ploughed plenty of furrows musically: “Our biggest challenge was when we put out Conga and it was so massive. It meant that when we wanted to release something completely different, like Bad Boy, it didn’t go down well with the record company. Then we wanted to release Words Get In The Way, and they were even more confused because it’s a ballad. We talked them into it. We didn’t want to be locked into the dance thing. After that song became huge, it freed us up. Every time you create something, you can’t let it paralyse you. You have to move forward.

“One time they even told Emilio to get rid of me because it was the time of bands with male leads. Yes, Fleetwood Mac had two female singers but they also had male singers, and there was Madonna and Cyndi Lauper, but that was a new thing in music. The record company even told Emilio to get rid of the horns and the percussion section. We fought to stay true to who we are, and I’m proud we didn’t compromise.”

The bus crash in 1990 had a profound impact on Gloria: “There must be some mechanism in our brains where you remember before and after, but you don’t remember the actual moment of impact. I remember everything except the actual breaking of my back. I grew up taking care of my wheelchair-bound            father, so I knew what my family might have to face with me. I just wanted to be independent and walk again.

“Then I started getting all these letters from people. They kept throwing the song Get On Your Feet back in my face, and I saw it as an opportunity to somehow inspire people through my perseverance. I rehabilitated six or seven hours a day - first in the pool because I couldn’t walk - and I had electrodes attached to my muscles so they wouldn’t die. Getting back on stage was euphoric. It was how I imagine climbing Mount Everest would feel. I had overcome so many obstacles and I’d worked so hard. It was just amazing.”

Having recently finished a successful limited season at the London Coliseum, new musical On Your Feet, telling the story of Gloria and Emilio Estefan, officially began its UK tour at Birmingham Hippodrome last night.

Writer Alexander Dinelaris has formulated the perfect book structure, zooming in on the astounding career of this power couple but also the obstacles that could easily have hindered their pathway to success. Gloria’s stubborn Mother, the reluctance of record labels to invest in crossover Latin music and the tragic tour bus crash that left Gloria with a fractured spine could have halted her career in its tracks, if it wasn’t for the inner strength they both possess.

Gloria’s phenomenal back catalogue fits seamlessly into the plot with all of the big hits covered including ‘Conga’ (which literally has people dancing in the aisles), ‘Dr Beat’, ‘1-2-3’ and ‘Anything For You’. The incredible seven-piece band remain on an onstage platform throughout, echoing how central they are to the show, although in certain scenes they were upstage out of sight.

Jerry Mitchell’s direction is excellent but it’s Sergio Trujillo’s choreography that truly brings the show to life with its Latin flair. You truly feel like you have been transported to Cuba.

The set design by David Rockwell is fairly minimal with sliding flats effectively choreographed to move the action from scene to scene, whilst Kenneth Posner’s lighting manages to capture both the intimate and concert style scenes equally as well.

Whilst the focus is understandably on Gloria and Emilio, the production is very much an ensemble piece with them contributing a huge amount to the overall feel of the show. Philippa Stefani takes over the mammoth role of Gloria Estefan for the tour and is nothing sort of sensational. Not only has she got the powerful stage presence required but she also captures the lesser-seen vulnerable side of Gloria so emotively.

George Ioannides is perfectly cast as Gloria’s counterpart, Emilio, with his oozing charm, electric chemistry with Stefani and strong vocals. His powerful performance of ‘Don’t Wanna Lose You’ is a real moment within the show. Madalena Alberto brings her industry experience to the role of Gloria’s hard-faced Mother, Gloria Fajardo, and thank goodness she has her moment to shine in a different way during ‘Mi Tierra’ – elegant and sassy. Gloria’s Grandmother, Consuela, is lovingly played by Karen Mann, who is unashamedly supportive of her Granddaughter’s talent and is always her constant.

On Your Feet plays at Birmingham Hippodrome until 7 September and continues to tour the UK until May 2020.