Eddie Izzard talks ahead of Wunderbar's visit to Birmingham 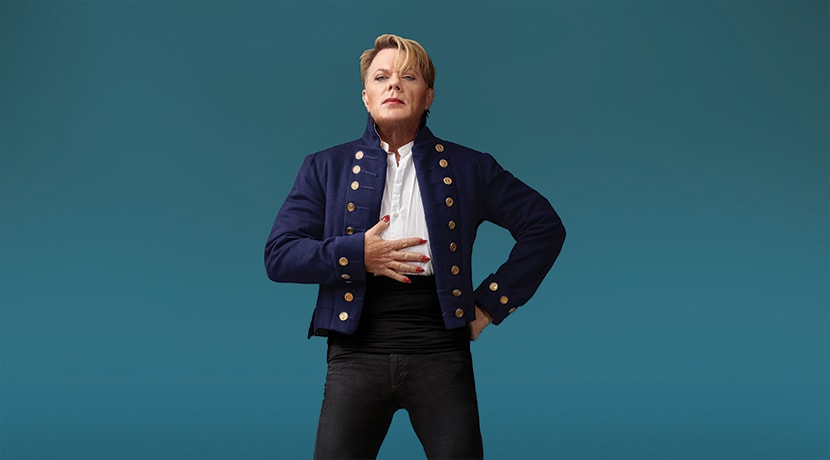 Stand-up comedian Eddie Izzard stops off in Birmingham next month with his latest touring show, Wunderbar. What’s On caught up with him to talk comedy, politics, Donald Trump and being transgender...

Birmingham welcomes stand-up legend, actor and political activist Eddie Izzard next month. Fans of Eddie’s alternative comedy revel in the stream-of-conciousness style that often results in surreal and fantastical side-splitting moments. The show he’s presenting, Wunderbar, is most likely his final comedy hurrah before he embarks on a career in politics.

“I feel like we’re at a time when half of the UK and half of the US have decided to return to 1930s’ politics, so I’ve taken a word from another language and used it in a very positive way because I’m very against the whole Trump and Brexit hate towards foreigners. So I’ve done this show in English, French and German - improvising in all languages as well - because I just wanted to make a positive statement across borders. I spent a few months in Paris and also in Germany and started doing the show in French and German before going into English. I also want to perform in as many countries as possible, especially seeing as when I started in stand-up there were a lot of places I couldn’t perform because of the Iron Curtain.”

The Wunderbar tour has already been to Australia, New Zealand, parts of Europe and the United States.

“I want to stand to be an MP, so I wanted to make sure this show had a comprehensive span of time and goes all the way from the Big Bang up to the present day. My fear of the  universe is there, so I’ve got my own feeling about how the universe works - and how I understand it - in the show too. I’m not sure if my thinking about the universe is 100% correct, but who knows!”

Wunderbar doesn’t need to change much from country to country, as Eddie firmly believes that his humour translates well into a number of different countries and languages.

“Humour is a human quality that’s the same all the world round. There’s a mainstream sense of humour, where comedians talk about sports stars or take the piss out of people on television, brand names in the shops, political people, that kind of thing. Sometimes those jokes can’t change country because, apart from the obvious language change, the references to politicians, TV, everyday things, would have to change too. Obviously my humour is more alternative, so anyone across the world who has a kind of humour where they like things like Monty Python will like my stuff too. Then you’ve just got to make sure your references all match up.

“For example, you can talk about KitKats because they’re sold in most places around the world. If your punchline somehow ends up being something to do with KitKats, you perhaps wouldn’t have to change things. You could say, “I hit him with a KitKat”. But maybe you wouldn’t be able to say, “I hit him with a Curly Wurly” outside of the UK, unless you explained what a Curly Wurly was as part of your show. I think I’ve got the hang of making my humour quite universal; I just have to check my references. If you talk about human sacrifice, everyone around the world is going to know what you’re talking about. I’d say 85 to 90% of subjects can travel to different countries.”

Eddie got his first laugh in front of an audience at the age of 12. He abandoned plans to solely pursue a career in drama and instead decided to focus on comedy.

“Monty Python would really be the central   influence on my career. I wanted to do sketch comedy originally but I couldn’t really get that going. Then Billy Connolly and Richard Pryor came through as stand-up icons. Billy really had this way of talking to a massive audience as if it was one on one. Richard had this great character work that I loved. But overall, Python was really the bedrock of my influences. My stand-up really is based on a narrator I’ve developed that talks to the audience, and then doing these little sketches that I think are quite Python-esque.”

Eddie finds it interesting to compare the average age of his audiences in different countries: “I don’t think audiences have changed that much over the years in Britain. I think we’ve always been pretty switched on, and I always assume the intelligence of the audience. I also don’t think I appeal to a more mainstream audience, so people who come to my shows know I’m going to take them in a pretty weird direction. So my audiences have grown through word of mouth about my strange comedy. I think there’s been less of this kind of comedy in Central and Eastern Europe, but as younger generations are coming through they’re watching more stuff in English, so the age of my audience is different over there, and up into Russia also.

The audience is slightly older in Britain because they grew up with that Monty Python style of comedy. I think it’s interesting because it seems to be that whenever you start to be popular in a country, that audience follows you through.”

Eddie believes that the state of the nation’s politics is to blame for the recent rise in homophobia: “In the UK, America and other countries across Europe, there’s been this rise in the far right like there was back in the ’30s. We can see Donald Trump being racist and sexist daily. Nigel Farage and Boris Johnson seem to be the best of friends with Trump in that regard. The politics of the country seems to have given people permission to go back to hatred again. We seem to be going backwards, and that’s something we must all fight against.

“I ran my 27 marathons in memory of the 27 years Nelson Mandela served in prison in South Africa. Of course, I ran with my painted nails and, when I came back to the UK, a friend asked me to go into the school his daughter was at. In the classroom, children of eight or nine were engaging in conversation about LGBTQ communities, racism and sexism. It’s unfortunate that the simplicity of using hatred to control politics and hate being more powerful than love in politics is on the rise at the moment. We need to fight this with every breath in our bodies.”

But Eddie also thinks there are some brilliant examples of progress being made: “I think we’re at a turning point, where we’re not judging women for not wanting to look overly feminine or calling them masculine for not liking heels and makeup. When I came out as transgender in 1985, I’d known since I was four - so since 1967. By then I just wanted to express myself and be honest about who I was. I’m under the impression that this kind of thing must be genetic, must be coded into who you are as a person. You don’t just get up one Tuesday and decide that’s who you are; you’ve always been that way. We’re not choosing a different lifestyle, we’re just expressing what’s inside us. Some women like to throw on heels and a skirt, and I do too! I remember thinking when I was a kid that I loved skirts just as much as girls did, but I also had all my boy’s stuff.

“I think that’s perhaps why I’m so keen on women’s football. I just love how the sport is full of athletically strong women who, at some points in history, would’ve been called strange and masculine but now are out there backing themselves and giving their opinions. It’s now the 21st century and we need more examples like women’s football, where colour, race, sexuality doesn’t matter; it’s all about who you are as a person and what you add to your community. I think they’re a great example to us all.”

Charity work is close to Eddie’s heart, but the Mandela Marathons were also about inspiring the average Joe to get out there and do themselves and others some good...

“When I thought about doing the Mandela Marathons it was because I really wanted to raise money for a good cause and also to inspire people. I think I look like a pretty average guy. David Beckham looks amazing and has amazing fitness, so people almost   expect him to be able to do amazing things. But people look at me and think, ‘Well, that’s just a guy!’ I can put a look together and do a bit of comedy, but I don’t look like David Beckham. So I’ve had people come to me and say that they’ve been inspired by what I’ve done, and that really is an honour.”

For now, touring Wunderbar is Eddie’s focus, and he would encourage anyone who is, or thinks they might be, a fan of his unique style to go along and see the show: “I mean, I see it every night and I still find it funny! Plus, I think this could be my last tour before I go off into politics, so catch me while you can - especially if you’ve seen my stuff before and liked it.”