A chilled-out vibe and quality cuisine at The Olive Tree, Lichfield 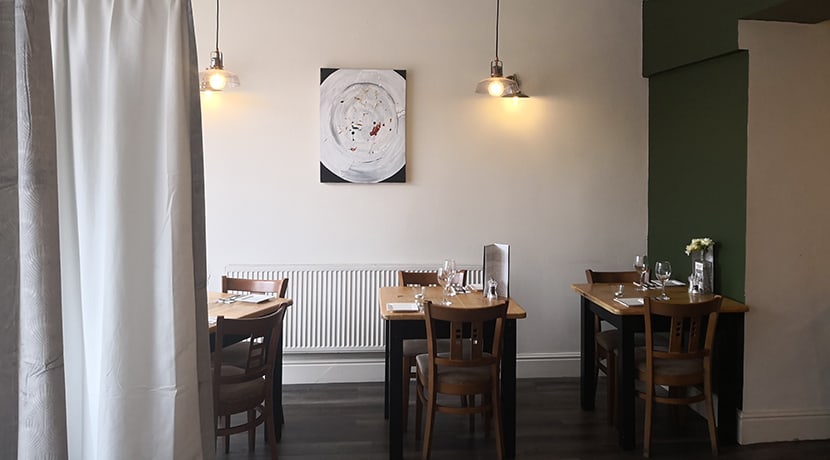 Nestled in an old, winding street in Lichfield is a gem of an eatery called The Olive Tree. Offering a fine dining experience with a chilled-out vibe and quality cuisine, it was taken over by new owners at the end of 2018 and comes complete with an attractive new menu. The restaurant is in the process of establishing itself as an innovative and vibrant venue for eating and relaxing, presenting a different concept in socialising where the emphasis is on exciting food and excellent service.

Open Tuesday to Saturday for dining and on Sundays for afternoon tea, The Olive Tree has just been named ‘best independent restaurant’ in the What’s On Readers’ Awards 2019. And having recently visited to experience the eatery myself, I can quite understand why it’s won that accolade.

I paid a visit on a Saturday evening with a friend, and we were both impressed from the moment we arrived. Small and intimate, it’s a perfect venue for romantic dining, a family get-together or just chilling with friends.

On arrival we were greeted by a very sociable waitress named Cherry and shown to our table, which was at the back of the restaurant where we could see and experience the open kitchen and the efficient working of the staff. Cherry brought our à la carte menus and a carafe of water. She proceeded to enquire about drinks as we perused the imaginative menus, where the emphasis is on seasonal local produce and a modern interpretation of traditional cuisine. I ordered a small bottle of Rose Lunetta, a sparkling prosecco produced in Northern Italy with beautiful red fruit and rose petal aromas and a dry yet crisp finish. My friend chose another Italian classic, Peroni, a refreshing beer which suits a variety of food.

The Olive Tree has two young chefs, Lewis and Adam, who have extensive high-level experience and are passionate about the content and presentation of the food. The manager, Becky, came to take our order and was extremely knowledgeable and informative about the menu.

To start, I ordered the mushroom pâté, consisting of wild mushrooms including shitake and pickled woodland with avocado, chestnuts and sorrel. The taste and presentation were superb. The pâté was earthy, herby and intense, the avocado supplying a subtle Mediterranean note to what otherwise felt like a very traditional British dish. My friend chose the scallop with brown shrimp, pickled mushroom, almonds and samphire. It was, by all accounts, excellent. Presented in a shell, the seafood starter was perfectly cooked, with a delicate sauce benefiting from the acidity of the mushroom and the creaminess of the almond, and offset by the addition of the vibrant, crisp and salty samphire - an ingredient associated with the coast and one which is both unusual and exciting.

For the main, I decided on the canon of lamb with purple potato, pea gnocchi, lettuce and ginger. The plate arrived and, like all of the dishes presented, was visually akin to a work of art. The lamb breast was seared on the outside, deliciously pink inside, delicately tender in texture and distinctive in flavour - a  triumph of cooking. The green pea gnocchi was divine and visually very enticing next to the purple potato puree. The ginger gave the dish an exotic kick and left a warm after-taste which balanced the extremely hearty meat element. It was very creative, boasting a real interplay of traditional fare with international ingredients.

My friend opted for the seabass with langoustine, feta, red pepper, olive, preserved lemon and bisque. What a combination!  Again, visually, the dish could have been in a gallery, so impressive was its plating. Taste-wise it was sublime. The seafood elements with the bisque and langoustine elevated the seabass to another level, while the sharpness of the feta and lemon with the saltiness of the olives produced a dish which had memories of Mediterranean holidays stamped through it. It was a wonderful combination of flavour, texture and taste.

The Olive Tree prides itself on sourcing fresh ingredients, and the manager was proud to talk about the local dairy supplier and the fact that the fish and vegetables came from regional markets. This emphasis on local and regional produce where possible is an attractive one, and one which will inevitably stimulate interest from customers who want to support local business and have a proper understanding of where their food comes from.

After savouring the first two courses, we were presented with the dessert menu. This had six offerings, all of which were unusual takes on traditional themes, including a cheese option. I went for the chocolate ganache served with milk chocolate sorbet, caramelised white chocolate and honeycomb. It was a chocoholic’s dream - sweet and indulgent.

My friend chose the blue cheese mousse served with treacle bread and pickled grapes in port - a very modern interpretation of a cheeseboard. The treacle bread was a sticky and melting alternative to the harsh traditional cracker, providing a beautiful contrast to the creamy, distinctively flavoursome blue cheese and the sharp port-infused grapes, which provided that perfect fruit acidity to offset the cream element of the cheese.  Again, we here saw a variety of clever taste and texture combinations being created by the chefs in the kitchen.

We rounded off the evening with fresh coffee served in a cafetière whilst listening to the cool jazz vibes of what is a very impressive eatery in the heart of the cathedral city of Lichfield.