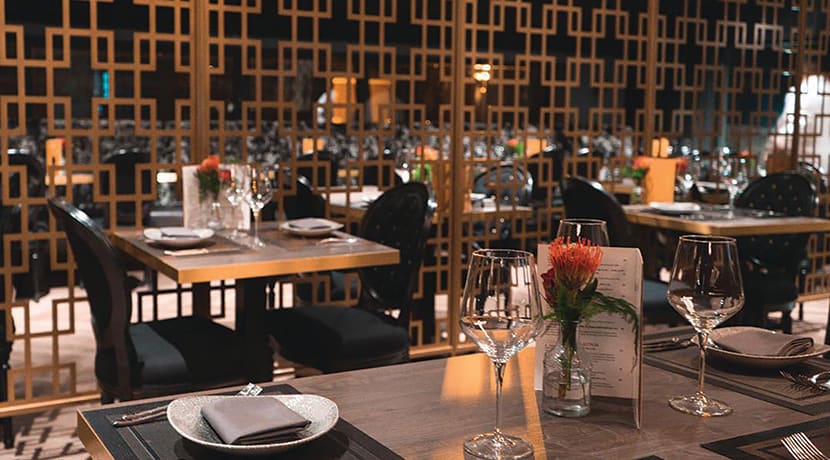 Brought to Staffordshire’s ever-expanding culinary scene by the owner of the award-winning James Dahl restaurant in The Arcadian, Birmingham, new kid on the block Blanc NRI is located on the A34 and specialises in serving kebabs and curries originating in the north west, south and Awadh region of India and on the streets of Delhi.

On arrival at the venue, we were immediately made to feel welcome by the friendly staff. Perusing the menu, over a cold Cobra, my partner and I discovered that Blanc NRI was more of a fine dining Indian restaurant than a regular balti house. Varied yet not too extensive, the menu featured such mouthwatering options as: monkfish fillets in a spicy coconut sauce flavoured with ginger and molgapodi mash; venison fillet in almond, yoghurt sauce and Awadhi spices; and lamb shank in lamb stock, yoghurt and potli masala.

We tucked into popadoms and pickles. The mango chutney - which was served alongside a mint sauce and a spicy sweet chilli sauce - was infused with pineapple; a nice change from the usual offering. Minor touches like this certainly help set the venue out from the crowd. It was apparent from the word go that Blanc NRI was going to be impressive.

On recommendation from the restaurant owner, we opted for the Tiger Prawn Malabar Style and the Kali Mirch Tikka to start. The prawn dish, which featured two beautifully meaty tiger prawns fried in a Yercaud pepper masala, was simply stunning. The tiger prawns were larger than any I’d ever eaten before;  the Yercaud pepper masala batter was soft and flavoursome without being overpowering.

The Kali Mirch Tikka, which featured cubes of soft and succulent boneless chicken cooked in a marinade of black pepper, cream and cheddar, was equally delicious and flavoursome. The cheddar, an unusual offering in Indian cuisine, added a subtle taste and married perfectly with the creamy pepper flavours. Both were served alongside a mango sauce, a chilli sauce, a relish of onion, coriander & tomato and some colourful edible flowers, all of which not only added a sense of freshness to the dishes but also ensured both plates of food were elegantly presented.

The owner explained that all the dishes he recommended we ordered - the two starters and the two mains that were to follow - were created by a Michelin-trained chef. This was certainly apparent in the complexity of the flavour combinations, the choice of ingredients and the presentation. Every dish presented to us was, quite simply, a work of art. Even the heavenly dal.

To say our main courses of Lobster Moilee and Railway Lamb Curry had a lot to live up to would be an understatement, but Blanc NRI successfully rose to the challenge.

The eagerly awaited lobster dish featured perfectly cooked, juicy meat in a rich ginger-infused     coconut sauce, served in the shell. Sat on a bed of smooth and silky molgapodi mash, and boasting a strong yet not too overpowering coconut flavour, it was simply wonderful.

The lamb option, which stuck closer to contemporary Indian cuisine, was another perfectly executed dish. Hotter than our other selections and packed full of aromatic flavours, it featured a delectable 37 in-house spice mix and a generous helping of melt-in-the-mouth lamb.

To accompany the main courses, we ordered an incredibly tasty chilli & cheese naan, a pulao rice and the most outstanding dal I've ever tasted. Boasting soft and creamy pigeon peas tempered with a rich blend of garlic and chilli, every mouthful was pure delight.

Although suitably full, we couldn’t leave without sampling dessert. The hot gulab jamun - an exotic, soft, fried milk dumpling soaked in rose-flavoured syrup - was stunning. And the Husn-E Ara was even better!

Featuring crispy fried bread (mouthwatering enough on its own!) stuffed with Kesari pineapple compote and topped with nutty rabri (a sweet condensed milk which boasts a rice pudding texture and flavour), it was unquestionably the nicest dessert I've been lucky enough to experience in an Indian restaurant. Definitely not one to order if you’re counting the calories, though…

Blanc NRI is a unique and relaxed dining experience that stimulates the senses courtesy of some utterly beautiful food. The owner's desire for perfection and subsequent meticulous attention to detail has resulted in a truly outstanding restaurant - one that I’d happily recommend to anyone and everyone.

I can’t help but feel, however, that the bizarre location could prove to be a problem. This restaurant needs to be in a bustling town or city, not set back off an A road. That said, my partner and I visited midweek and it wasn’t empty.

I wish the owner all the best in his venture here, and I truly hope that Blanc NRI gains both the recognition and popularity that it deserves. It really is something special.