New Vic in the spotlight 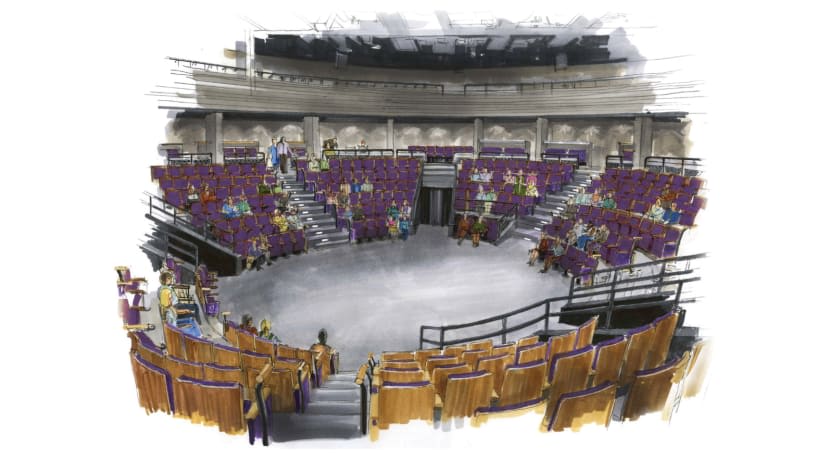 Following a refurbishment of its auditorium, the New Vic Theatre returns to the spotlight this autumn with its new socially distanced Housewarming Season. What’s On caught up with the theatre’s Artistic Director, Theresa Heskins, to find out more...

From October, the New Vic is presenting inventive, socially distanced productions. Audiences who purchase tickets to the shows will find themselves entering a somewhat different auditorium following a refurbishment. And there’s been plenty else going on behind the scenes during lockdown too.

“The building had been closed to the public until the 7th of September,” says New Vic Artistic Director Theresa Heskins, “but since then we've been really, really busy. We've got three amazing outreach departments: Education, Borderlines and Appetite. Those departments do a lot of work with our local communities. We've been carrying on a lot of that, as much as government guidelines allowed, really. It’s important that our outreach programmes continue to work because it can be life-changing for the participants. For example, our Education programme put theatre sessions online that coincided with the moment young people learnt they wouldn't be taking the GCSE and A-Level exams they'd worked so hard for. Our support has boosted their mental health and wellbeing during that difficult period.

“We also do quite a bit of work with elders with dementia as well. As soon as lockdown began, they were finding it even more of a challenge. With that group, we felt that moving work online would be difficult because some people don't necessarily have confidence with devices, or all the right up-to-date equipment to be able to do that kind of remote working. We received a grant from the Staffordshire Community Fund to buy equipment, so we did a training programme with them and were able to keep in touch with them throughout lockdown. Then, when we were able to go out again as government guidance changed, we were able to do an animated park walk as a kind of combination of theatre and social time.

“We will always want to help with ‘holiday hunger’ too. Every holiday our Borderlines project does an arts programme with young people who are at risk of going hungry during the holidays and gives them lunch. We were really determined to still do that. But we felt that, although it would be possible to do it indoors, it would have to be with very limited numbers for social distancing. So Borderlines toured around communities showing a band, and they reached four times as many young people as they would have with the old programme. What's brilliant is that this period has changed some of our working practices and our aspirations for the future - and for the better. So we'll be doing that project again every school holiday.”

The lockdown period has also seen the venue’s auditorium being renovated, 34 years after it was originally designed as Europe’s first purpose-built ‘theatre in the round’. Original architect John Sambrook emerged from retirement to support the refurb.

“When lockdown happened, we’d already planned for the building to be closed for a month over summer to allow the refurbishment,” explains Theresa. “There's been this extraordinary transformation happening inside. We’re just making sure that the building works as beautifully as it has done for another 30 years, so we can continue to welcome people in and make them as comfortable as possible during our shows. It’s been a really affirming thing to be doing during this difficult period. The ‘theatre in the round’ is in our DNA, so we've kept that, certainly! It's just the same auditorium in some new clothes, really. We've taken the old seats out and had a whole new set in a different colour, but they’re very comfortable and very modern. We've increased our access across the auditorium and redeveloped the balcony too. We've put in a new stage as well, as it was taking a toll on actors. It’s all about making the space better for all involved.”

The Housewarming Season kicks off in October with innovative light-and-sound installation Ghostlight. It continues in November with Hoard: Rediscovered, an opportunity to revisit the theatre’s 2015 Staffordshire Hoard Festival.

“We called it Housewarming because we felt that the New Vic isn’t our theatre unless our local people are in it, so we really wanted to make sure they were going to be part of that. There's been a massive, massive fundraising campaign recently that helped with our refurb, and the support of local people and businesses has been essential. We really wanted to say thank you, and that’s what this season has been all about. But of course, at the time when we were planning, we weren't entirely sure what kind of restrictions we'd be working with, so this season has been created in response to those particular guidelines too.

“Our first production, Ghostlight, is a five-minute piece; and it's an opportunity for people to drop by to walk around the refurbished auditorium whilst experiencing flashbacks to shows from the past at the New Vic. That’s opening at the start of October.

“Then, in November, we've got a series of shows that were originally staged in 2015 when we were in residence at the National Theatre Studio. They sat me in an office in the studio and told me to ‘dream big’. So I came up with a massive spectacle of plays that would respond to the discovery of the incredible treasure in a Staffordshire field by an amateur metal detectorist. This treasure, the Staffordshire Hoard, has changed our understanding of history in a massive way, and been very, very important to Staffordshire too. It just so happened to be around the same time that Stoke City Football Club got into the Premiership, so these were massive years for Staffordshire! We were all over the papers in a really exciting way. I think there were 24 different artists responsible for mini plays and coming up with various responses for Staffordshire Hoard Festival.

“With Hoard: Rediscovered, we're going to be recreating about half the day - so a documentary and 10 mini plays working with the actors and creatives who did them originally. I'm really delighted that we'll be employing all these freelancers to work with us on the season because it feels like a really important thing to be doing at the moment.”

Onward towards Christmas, audiences at the New Vic will be treated to a brand-new imagining of French ballet Coppélia, and the return of David Graham Productions.

“David Graham Productions is really dear to us and our audience. He visits us twice a year and always creates a wonderful party atmosphere. I think we're going to really be needing that - a socially distanced party. Unfortunately, our planned Christmas show, Beauty And The Beast, is postponed to 2021. It takes so long for us to put together our Christmas shows, but we’re so proud of them, as they reach one in 10 local people. And for so many young people it's their first-ever experience of going to the theatre. But at the time we needed to put it together, we just didn't have enough certainty about what would be happening to be able to know what we were creating and how we could create it. We ended up having to reimagine the whole season alongside our new Christmas offering, Coppelia: The Mystery. While I'm sad we're not doing the kind of show that we normally do, it's quite exciting as an artist to have an opportunity to think differently about how we do things.

“The plan is that we're going to create a sort of frost fair atmosphere in the gardens and car park outside the New Vic. We're really lucky that we've got these really beautifully landscaped urban gardens. We're going to invite the audience down the street of old-fashioned shops that we're creating, and there will be this lovely festive feeling. The audience will eventually come to the mysterious, magical toy shop of Doctor Coppelia. Then they’re going into the auditorium, which is the back of the shop, to discover his secrets. It's nice to do a promenade piece; we don't often get the opportunity to do that kind of work. Coppelia is an unusual story and usually a ballet, but ultimately it’s a really lovely tale of togetherness, which seems to be an important theme at the moment. It was also born out of the idea that when people visit shops and so on at the moment, they are on the opposite sides of perspex screens. We've all spent the summer looking at each other through windows. I needed to come up with a play that took place with the audience on one side of the window and the actors on the other. Peering through the window at the toy shop is quite an important starting point to this story. Hopefully we make Coppelia: The Mystery happen. At the moment we don't know exactly whether guidance will change, but hopefully what we've created is something quite flexible, so we can respond in all sorts of ways to whatever comes our way.”

Looking towards the future, the New Vic is poised and ready to continue onwards and upwards.

“Yeah, we’re feeling really positive, actually. We've got such amazing support from our local community, and we support them in return with our outreach programmes, which are growing in significance all the time. We've got a really fabulous season lined up for next year, with all the shows we've been working on over lockdown, such as Marvellous! - the story of Neil Baldwin - which is an extraordinarily heartwarming tale. I think the shows will be all the better for the additional time spent. In 2021 we'll possibly put some of our best work ever on stage as a result of the time we’ve had to develop it further.

“I think that the UK's arts & culture industry is such an important part of who we are as a nation, and a really significant part of the economy as well. For every pound of investment that the government makes into the arts, five pounds is returned to the Treasury. The wellbeing outcomes we deliver at theatres are essential, as well as the general feelgood factor from being able to  enjoy a night out with friends and family. I think those are going to be all the more important going forward. I really hope that people will be able to support us, because we need to hang onto that.”

For dates and tickets for forthcoming performances, visit newvictheatre.org.uk