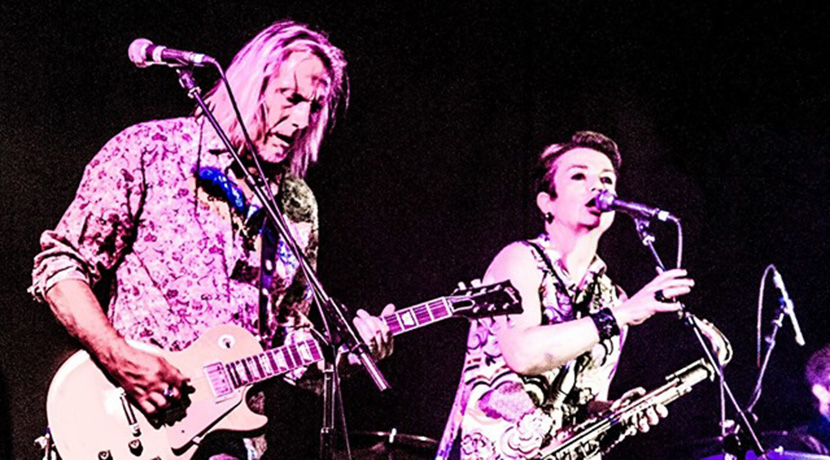 Hipkiss are a well-regarded five piece band, which plays a potent mix of blues, rock and funk, both originals and their own spin on other people’s music, and they will be making their Lichfield debut when they play at Lichfield Guildhall on Sunday October 27th.

Guitarist Muddy Manninen has played with the likes of Wishbone Ash, Havana Blacks, and The Red House Blues Band.

Bassist Mark Butler has worked as a session player with various bands in New York in the 1980s including John Moore from The Jesus and Mary chain, playing numerous gigs at CBGB’S, and The Knitting Factory, supporting bands including Living Colour, Crowded House, They Might be Giants and Sham 69 and toured the USA in 1987 supporting Peter Murphy from Bauhaus.

Simon Riley has played drums from the age of nine when he found an odd pair of charred drum sticks on the edge of a bonfire behind the village Scout hut. He has played many styles over the years with many artists including Keith Thompson, Eric Bell, Tony Hymas and Mike Burston (Wurzel, Motorhead) with whom he recorded the single ‘Bess’.

A Lichfield Arts spokesman said ‘This incendiary mix of saxophone, soulful musicianship and a hard rocking ensemble sound will mean that this concert will be an unmissable evening for all music fans, adding to the many memorable nights of live Blues and Jazz that Lichfield Arts have hosted over the years’.

Tickets are £12.00, £10.80 for Friends of Lichfield Arts and £6.00 for under 16’s. The concert starts at 8.00pm, with doors opening at 7.15pm. Tickets and further information are available from www.lichfieldarts.org.uk phoning 01543 262223, or by calling into the Lichfield Arts Box Office in Donegal House on Bore Street. To keep up with Lichfield Arts exciting news, follow us on Twitter @lichfieldarts or find us on Facebook.