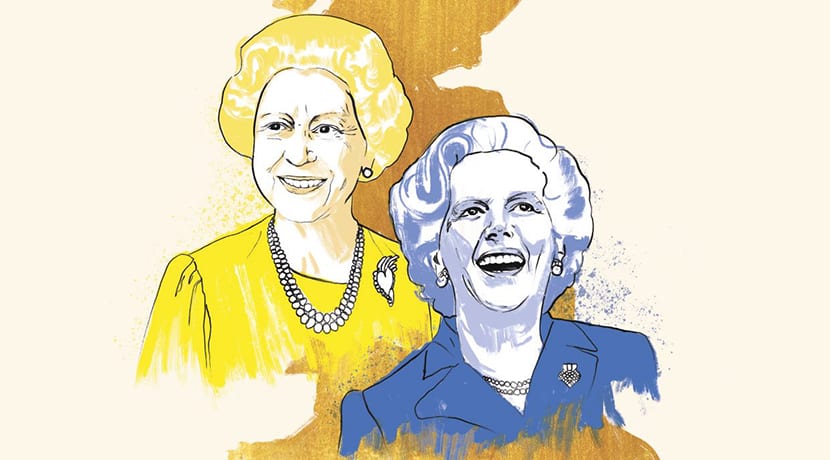 Two of Britain’s most iconic women – the Queen and Margaret Thatcher – will be reunited at the New Vic Theatre, Newcastle-under-Lyme from Friday 6 – Saturday 28 September as the theatre-in-the-round stage a new production of the Olivier award-winning play, Handbagged.

A comedy, Handbagged imagines what might have happened in the private meetings between Queen Elizabeth II and Margaret Thatcher during their infamous private meetings in the ’80s. Exploring the relationship between these two powerful women, Handbagged is sharply funny, packed with satirical humour and highly entertaining and features a host of characters alongside the Monarch and Prime Minister including Ronald and Nancy Reagan, Geoffrey Howe, Denis Thatcher and many more.

Fiona Buffini, who was last at the New Vic to direct The Widowing of Mrs Holroyd, returns to the theatre this autumn to direct her sister Moira Buffini’s (Harlots) acclaimed play. A talented cast of six actors will bring to life all of the recognisable characters. Zoe Aldrich (Antigone and Her Naked Skin,National Theatre) will play Mags, Louise Bangay (Cyrano de Bergerac and Rock ‘n’ Roll, Chichester Festival Theatre) will play Q; Melissa Collier (A Midsummer Night’s Night Dream, Orange Tree Theatre) will play Liz and Jan Goodman (Marriage, One Reputedly Glamorous Woman, Belgrade Theatre, Coventry) will play T. Ashley Gerlach (Beauty and the Beast, Theatre by The Lake) and Paul Mundell (Table, New Vic Theatre and Jane Eyre, National Theatre) complete the company and will play all other roles in the production.

Fiona Buffini said: “I'm genuinely delighted to be back at the New Vic. The play has been performed all over the UK and most recently in the US. This is the first time (to my knowledge) that it's been performed in the round. This intimacy really suits the play: it's as if we're eavesdropping on private meetings. All the characters talk to the audience, which works so well at the Vic.”

Handbagged is on stage at the New Vic Theatre from Friday 6 until Saturday 28 September.

Tickets are on sale now priced from £15.50 and can be booked HERE